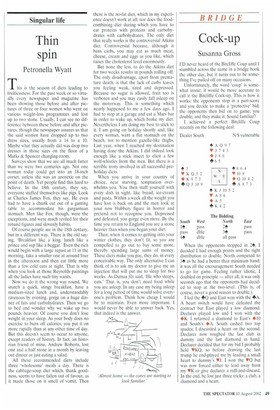 This is the season of diets leading to fruitlessness. For the past week or so virtually every newspaper and magazine has been showing those before and after pictures of three or four women who went on various weight-loss programmes and lost up to two stone. Usually, I can see no difference between these before and after pictures, though the newspaper assures us that the said women have dropped up to two dress sizes, usually from a 14 to a 10. Maybe what they actually did was drop two dresses in those sizes on the floor of a Marks & Spencer changing-room,

Surveys show that we are all much fatter than we were two centuries ago. Not one woman today could get into an 18-inch corset, unless she was an anorexic on the point of death. Yet people find this hard to believe. In the 18th century, they say, everyone stuffed themselves like pigs. Look at Charles James Fox, they say. He even had to have a chunk cut out of a gaming table to accommodate his gargantuan stomach, Men like Fox, though, were the exceptions, and were much reviled for their rotund figures and slovenly habits.

Of course people ate in the 18th century, but in a different way. There is the old saying, 'Breakfast like a king, lunch like a prince and sup like a beggar.' Even the rich would begin with a large repast at 11 in the morning, take a smaller one at around four in the afternoon and then eat little more than a few cold cuts at night. That is why when you look at those Reynolds paintings all the ladies have such tiny waists.

Now we do it the wrong way round. We snatch a quick, stingy breakfast, have a medium-sized lunch and, understandably ravenous by evening, gorge on a huge dinner of fats and carbohydrates. Then we go to bed and wonder why we wake up two pounds heavier. Of course you don't lose weight in your sleep. As your body does no exercise to burn off calories, you put it on more rapidly than at any other time of day. But this doesn't seem to occur to anyone, except readers of history. In fact, an historian friend of mine, Andrew Roberts, lost one and a half stone in a month by leaving out dinner or just eating a salad.

All these recommended diets include three 'wholesome' meals a day. There is the cabbage-soup diet which, thank goodness, seems to have fallen out of favour, as it made those on it smell of vomit. Then there is the no-fat diet, which in my experience doesn't work at all; nor does the foodcombining diet during which you have to eat proteins with proteins and carbohydrates with carbohydrates. The only diet that really works is the controversial Atkins diet. Controversial because, although it bans carbs, you may eat as much meat, cheese, cream and eggs as you like, which raises the cholesterol level enormously.

But none the less, to do the Atkins diet for two weeks results in pounds rolling off. The only disadvantage, apart from premature death, is that the lack of carbs leaves you feeling weak, tired and depressed. Because no sugar is allowed, fruit too is verboten and you may easily fall asleep on the motorway. This is something which nearly happened to me a few days ago. I had to stop at a garage and eat a Mars bar in order to wake up, which broke my diet. Nevertheless I am doing my best to stick to it. I am going on holiday shortly and, like every woman, want a flat stomach on the beach, not to mention gazelle-like thighs. Last year, when I reached my destination having done the Atkins, I did indeed look enough like a stick insect to elicit a few wolf-whistles from the men. But there is a terrible irony involved in all successful preholiday diets.

When you arrive in your country of choice, near starving, temptation overwhelms you. You then stuff yourself with every dish in sight, like bread, ice-cream and pasta. Within a week all the weight you have lost is back on and the men look at your now blubbery figure in horror and pretend not to recognise you. Depressed and defeated, you gorge even more. By the time you return to England you are a stone heavier than when you began your diet.

Then, when it comes to getting into your winter clothes, they don't fit, so you are compelled to go out to buy some more, thereby spending large sums of money. These diets make you pay, they do, in every conceivable way. The only alternative I can think of is to ask my doctor to give me an injection that will put me to sleep for two weeks. As Dumas fits said. 'He who sleeps, eats.' That is, you don't need food while you are asleep. In any case my being asleep for a long period of time would solve everyone's problem. Think how cheap I would be to maintain, Even more important, I would never be able to answer back. Yes, that indeed is the answer.