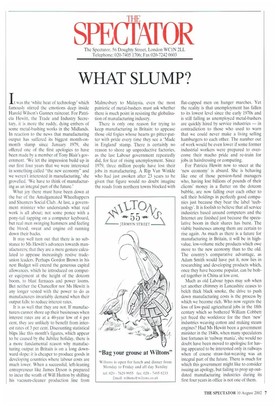 It was the 'white heat of technology' which famously stirred the emotions deep inside Harold Wilson's Gannex raincoat. For Patricia Hewitt, the Trade and Industry Secretary, it is more the ruddy, dying embers of some metal-bashing works in the Midlands. In reaction to the news that manufacturing output has suffered its biggest month-onmonth slump since January 1979, she offered one of the first apologies to have been made by a member of Tony Blair's government, 'We let the impression build up in our first four years that we were interested in something called "the new economy" and we weren't interested in manufacturing,' she grovelled. 'We have to think of manufacturing as an integral part of the future.'

What joy there must have been down at the bar of the Amalgamated Wheeltappers and Shunters Social Club. At last, a government minister who understands what real work is all about; not some ponce with a pony-tail tapping on a computer keyboard, but real men swinging hammers and feeling the blood, sweat and engine oil running down their backs.

It may well turn out that there is no substance to Ms Hewitt's advances towards manufacturers; that they are a mere gesture calculated to appease increasingly restive tradeunion leaders. Perhaps Gordon Brown in his next Budget will extend the generous capital allowances, which he introduced on computer equipment at the height of the dotcom boom, to blast furnaces and power looms. But neither the Chancellor nor Ms Hewitt is any longer vested with the power to do as manufacturers invariably demand when their output falls: to reduce interest rates.

It is as well that they are not. If manufacturers cannot shore up their businesses when interest rates are at a 40-year low of 4 per cent, they are unlikely to benefit from interest rates of 3 per cent. Discounting statistical blips like this month's figures, which appear to be caused by the Jubilee holiday, there is a more fundamental reason why manufacturing output in Britain is on a long downward slope: it is cheaper to produce goods in developing countries where labour costs are much lower. When a successful, left-leaning entrepreneur like James Dyson is prepared to incur the wrath of Will Hutton by shifting his vacuum-cleaner production line from Malmesbuty to Malaysia, even the most patriotic of metal-bashers must ask whether there is much point in resisting the globalisation of manufacturing industry.

There is only one reason for trying to keep manufacturing in Britain: to appease those old fogies whose hearts go pitter-patter with pride every time they see a 'Made in England. stamp. There is certainly no reason to shore up unproductive factories, as the last Labour government repeatedly did, for fear of rising unemployment. Since 1979, three million people have lost their jobs in manufacturing. A Rip Van Winkle who had just awoken after 23 years to be given that figure would no doubt imagine the roads from northern towns blocked with

flat-capped men on hunger marches. Yet the reality is that unemployment has fallen to its lowest level since the early 1970s and is still falling as unemployed metal-bashers are quickly hired by service industries — in contradiction to those who used to warn that we could never make a living selling hamburgers to each other. The number out of work would be even lower if some former industrial workers were prepared to overcome their macho pride and re-train for jobs in hairdressing or computing.

For Patricia Hewitt now to sneer at the 'new economy' is absurd. She is behaving like one of those pension-fund managers who, having lost billions of pounds of their clients' money in a flutter on the clotcom bubble, are now falling over each other to sell their holdings in perfectly good companies just because they bear the label 'technology'. It is foolish to believe that all service industries based around computers and the Internet are finished just because the speculative boom in their shares has burst. The viable businesses among them are certain to rise again. As much as there is a future for manufacturing in Britain, it will be in highvalue, low-volume niche products which owe more to the new economy than to the old. The country's comparative advantage, as Adam Smith would have put it, now lies in researching and developing products which, once they have become popular, can be bolted together in China at low cost.

Much as old Labour types may sob when yet another chimney in Lancashire ceases to belch thick black smoke, the drive to push down manufacturing costs is the process by which we become rich. Who now regrets the loss of low-paid agricultural jobs in the 18th century which so bothered William Cobbett yet freed the workforce for the then 'new' industries weaving cotton and making steam engines? Had Ms Hewitt been a government minister in the 1840s, when many speculators lost fortunes in 'railway mania', she would no doubt have been moved to apologise for having appeared to be interested only in railways when of course straw-hat-weaving was an integral part of the future. There is much for which this government might like to consider issuing an apology, but failing to prop up outdated manufacturing industries during its first four years in office is not one of them.