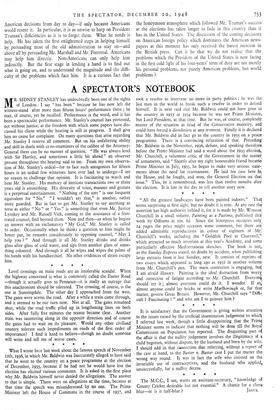 Page 5, 10 December 1948 — "All the greatest landscapes have been painted indoors." That seems
Close

"All the greatest landscapes have been painted indoors." That seems

surprising at first sight, but no doubt it is true. At any rate the assertion has high authority behind it, for it is made by Mr. Winston' Churchill in a small volume, Painting as a Pastime, published thil' week by Odhams at ros. 6d. Since the letterpress occupies only 24 pages the price might occasion some comment, but there are added admirable reproductions in colour of eighteen of Mr. Churchill's works, including the " Goldfish Pool at Chartwell," which attracted so much attention at this year's Academy, and some particularly effective Mediterranean sketches. The book is not, as the Sunday Express stated, no doubt by accident, when publishing large extracts from it last Sunday, new. It consists of reprints of two essays which appeared as long ago as 1932 in another volume from Mr. Churchill's pen. The main contention is engaging, bul I am afraid illusory. Painting is the ideal distraction from worry and corrective of fatigue according to Mr. Churchill. Everyone should try it ; almost everyone could do it. I wonder. If so; almost anyone could lay bricks or write Marlborough or, for that matter, govern Great Britain. However, Mr. Churchill says "Diffl4, cult ? Fascinating ! " and who am I to gainsay him ?