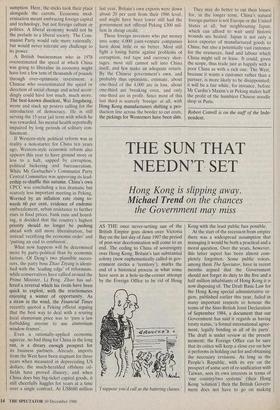 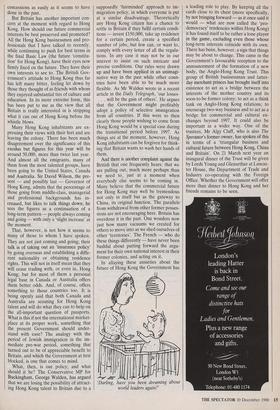 THE SUN THAT NEEDN'T SET

Hong Kong is slipping away.

the Government may miss

AS THE once never-setting sun of the British Empire goes down over Victoria Bay on the last day of June 1997 the period of post-war decolonisation will come to an end. The ceding to China of sovereignty over Hong Kong, Britain's last substantial colony (now euphemistically called in gov- ernment circles a .`territory'), marks the end of a historical process in what some have seen as a hole-in-the-corner attempt by the Foreign Office to be rid of Hong 'I suppose you'd call us the battering classes.' Kong with the least public fuss possible.

At the start of the recession from empire there was a widespread assumption that managing it would be both a practical and a moral question. Over the years, however, this latter aspect has been almost com- pletely forgotten. Some public voices, among them The Spectator, have in recent months argued that the Government should not forget its duty to the five and a half million inhabitants of Hong Kong it is now disposing of. The Draft Basic Law for the Hong Kong special administrative re- gion, published earlier this year, failed in many important respects to honour the terms of the Sino-British Joint Declaration of September 1984, a document that our Government has said it regards as having treaty status, 'a formal international agree- ment, legally binding in all of its parts'. The draft is under review at the present moment; the Foreign Office can be sure that its critics will keep a close eye on how it performs in holding out for and obtaining the necessary revisions. As long as the People's Republic, with its eye on the prospect of some sort of re-unification with Taiwan, sees its own interests in terms of 'one country/two systems' (their Hong Kong 'solution') then the British Govern- ment does not have to go on making

concessions as easily as it seems to have done in the past.

But Britain has another important con- cern at the moment with regard to Hong Kong. How should our future commercial interests be best preserved and promoted? All the Hong Kong businessmen and pro- fessionals that I have talked to recently, while continuing to push for best terms in the final Basic Law (the future 'constitu- tion' for Hong Kong), have their eyes now firmly fixed on the future. They have their own interests to see to. The British Gov- ernment's attitude to Hong Kong thus far has left many bitter, feeling let down by those they thought of as friends with whom they enjoyed substantial ties of culture and education. In its more extreme form, this has been put to me as the view that all Britain is really interested in is stripping what it can out of Hong Kong before the whistle blows.

Many Hong Kong inhabitants are ex- pressing their views with their feet and are leaving the colony. There has been much disagreement over the significance of this exodus but figures for this year will be around 50,000, more than twice last year. And almost all the emigrants, many of them from the most talented groups, have been going to the United States, Canada and Australia. Sir David Wilson, the pre- sent — and possibly last — Governor of Hong Kong, admits that the percentage of those going from middle-class, managerial and professional backgrounds has in- creased, but likes to talk things down; he sees the figures as a continuation of a long-term pattern — people always coming and going — with only a 'slight increase' at the moment.

That, however, is not how it seems to many of those to whom I have spoken. They are not just coming and going; their talk is of taking out an `insurance policy' by going overseas and establishing a diffe- rent nationality or obtaining residence rights. This will not in itself mean that they will cease trading with, or even in, Hong Kong; but for most of them a personal legal base in Canada or Australia offers them better odds. And, of course, offers something to those countries too. It is being openly said that both Canada and Australia are scouting for Hong Kong talent and will do what they can to help on the all-important question of passports. What is this if not the international market- place at its proper work, something that the present Government should under- stand with ease? The analogy with the period of Jewish immigration in the im- mediate pre-war period, something that turned out to be of appreciable benefit to Britain, and which the Government at first blocked, is one that comes to mind.

What, then, is our policy; and what should it be? The Conservative MP for Buckingham, George Walden, has argued that we are losing the possibility of attract- ing Hong Kong talent to Britain due to a

supposedly 'fairminded' approach to im- migration policy, in which everyone is put at a similar disadvantage. Theoretically any Hong Kong citizen has a chance to settle in Britain if they fulfil certain condi- tions — invest £150,000, take up residence for a certain period, create a specified number of jobs; but few can, or want to, comply with every letter of all the regula- tions. In any case it may not be in our interest to insist on such intricate and precise conditions. Our rules were drawn up and have been applied in an unimagi- native way in the past while other coun- tries have been able to be much more flexible. As Mr Walden wrote in a recent article in the Daily Telegraph, our losses- . . will be the gain of others'. He argues that the Government might profitably adopt a policy of selective immigration from all countries. If this were so then clearly those people wishing to come from Hong Kong would be a special case during the transitional period before 1997. As things are at the moment, however, Hong Kong inhabitants can be forgiven for think- ing that Britain wants to wash her hands of them.

And there is another complaint against the British that one frequently hears: that we are pulling out, much more perhaps than we need to, just at a moment when everybody else seems to be coming in. Many believe that the commercial future for Hong Kong may well be tremendous not only in itself but as the gateway to China, its original function. The parallels. from withdrawal from other former posses- sions are not encouraging here. Britain has overdone it in the past. One wonders now just how many vacuums we created for others to move into as we shed ourselves of other 'territories'. The French — who do these things differently — have never been bashful about putting forward the argu- ment for their own national interest in their former colonies, and acting on it.

In allaying these anxieties about the future of Hong Kong the Government has 'Darling, have you been dreaming about world leaders again?' a leading role to play. By keeping all the cards close to its chest (more specifically, by not bringing forward — as it once said it would — what are now called the 'pro- democracy' tendencies within Hong Kong) it has found itself to be rather a lone player in the game, excluding even those whose long-term interests coincide with its own. There has been, however, a sign that things may be about to change. This came in the Government's favourable reception to the announcement of the formation of a new body, the Anglo-Hong Kong Trust. This group of British businessman and latter- day merchant princes has brought itself into existence to act as a bridge between the interests of the mother country and its soon-to-be former colony; to act as a think tank on Anglo-Hong Kong relations; to encourage two-way business and to act as a bridge for commercial and cultural ex- changes beyond 1997. It could also be important in a wider way. One of the trustees, Mr Algy Cluff, who is also The Spectator's former owner, has spoken of this in terms of a `triangular business and cultural future between Hong Kong, China and Britain'. On 21 March next year an inaugural dinner of the Trust will be given by Lords Young and Glenarthur at Lancas- ter House, the Department of Trade and Industry co-operating with the Foreign Office. Whether the Government will offer more than dinner to Hong Kong and her friends remains to be seen.