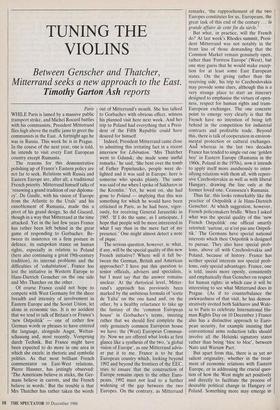 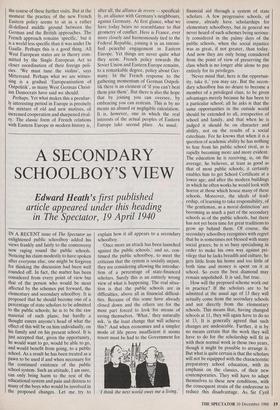 Between Genscher and Thatcher, Mitterrand seeks a new approach to the East.

Timothy Garton Ash reports Paris WHILE Paris is lamed by a massive public transport strike, and Michel Rocard battles with his communists, President Mitterrand flies high above the traffic jams to greet the communists in the East. A fortnight ago he was in Russia. This week he is in Prague. In the course of the next year, one is told, he intends to visit every East European country except Rumania.

The reasons for this demonstrative polishing up of France's Eastern policy are not far to seek. Relations with Russia and Eastern Europe are, after all, a traditional French priority. Mitterrand himself talks of 'renewing a grand tradition of our diploma- cy'. De Gaulle, with his vision of 'Europe from the Atlantic to the Urals' and his ennoblement of Rumania, made this a pivot of his grand design. So did Giscard, though in a way that Mitterrand at the time attacked. Yet in the last few years France has rather been left behind in the great game of responding to Gorbachev. Be- tween its insistence on a firm posture in defence, its outspoken stance on human rights, especially in relation to Poland (here also continuing a great 19th-century tradition), its internal problems and the difficulties of 'cohabitation', France has lost the initiative in Western Europe to Hans-Dietrich Genscher on the one side and Mrs Thatcher on the other.

Of course France could not hope to compete with West Germany for the sheer breadth and intensity of involvement in Eastern Europe and the Soviet Union, let alone in economic ties. It is no accident that we tend to talk of Britain's or France's 'new Ostpolitik' — one of rather few German words or phrases to have entered the language, alongside Angst, Weltan- schauung and, most recently, Vorsprung durch Technik. But France might have been expected to do more in one area in which she excels: in rhetoric and symbolic politics. As that most brilliant French commentator on East-West relations, Pierre Hassner, has jestingly observed: The Americans believe in sticks, the Ger- mans believe in carrots, and the French believe in words.' But the trouble is that Mrs Thatcher has rather taken the words out of Mitterrand's mouth. She has talked to Gorbachev with obvious effect, witness his planned visit here next week. And her trip to Poland had everything that a Presi- dent of the Fifth Republic could have desired for himself.

Indeed, President Mitterrand came close to admitting this irritating fact in a recent interview for Liberation. 'Mrs Thatcher went to Gdansk; she made some useful remarks,' he said, 'She bent over the tomb of Father Popieluszko, people were de- lighted and it was said in Europe: here is someone who speaks plainly. The same was said of me when I spoke of Sakharov in the Kremlin.' Yet, he went on, she had gone to Poland — implying that this was something for which he would have been criticised in Paris, as he had been, vigor- ously, for receiving General Jaruzelski in 1985. 'If I do the same, as I anticipate, I hope that people will be more interested in what I say than in the mere fact of my presence.' One might almost detect a note of pique.

The serious question, however, is: what, if any, will be the special quality of this new French initiative? Where will it fall be- tween the German, British and American approaches? I have put this question to senior officials, advisers and specialists, but I must say that the answer remains unclear. At the rhetorical level, Mitter- rand's approach has previously been marked by the ambitious formula of `sortir de Yalta' on the one hand and, on the other, by a healthy reluctance to take up the fantasy of the 'common European house' in Gorbachev's terms, insisting rather that we should first complete the only genuinely common European house we have: the (West) European Commun- ity. Now we are offered what looks at first glance like a synthesis of the two, 'a global vision of Europe', as one Mitterrand advis- er put it to me. France is to be that European country which, looking beyond 1992 and beyond the frontiers of the EEC, tries to ensure that the construction of Europe. remains open to the other Euro- peans. 1992 must not lead to a further widening of the gap between the two Europes. On the contrary, as Mitterrand

remarks, 'the rapprochement of the two Europes constitutes for us, Europeans, the great task of this end of the century ... la grande affaire de cette fin du siècle.'

But what, in practice, will the French do? At last week's Rhodes summit, Presi- dent Mitterrand was not notably in the front line of those demanding that the Common Market remain genuinely open, rather than 'Fortress Europe' (West), but one may guess that he would make excep- tion for at least some East European states. On the giving rather than the receiving side, his trip to Czechoslovakia may provide some clues, although this is a very strange place to start an itinerary designed to emphasise the virtues of open- ness, respect for human rights and trans- European exchanges. The one concrete point to emerge very clearly is that the French have no intention of being left behind in the competition for industrial contracts and profitable trade. Beyond this, there is talk of cooperation in environ- mental protection or cultural exchanges. Anil whereas in the last two decades France has tended to single out one 'golden boy' in Eastern Europe (Rumania in the 1960s, Poland in the 1970s), now it intends to apply itself more assiduously to inten- sifying relations with them all, with repres- sive Czechoslovakia as well as with liberal Hungary, drawing the line only at the former loved one, Ceausescu's Rumania.

Thus far, this looks remarkably like the practice of Ostpolitik a la Hans-Dietrich Genscher. At which suggestion, however, French policymakers bridle. When I asked what was the special quality of this 'new French Ostpolitik' one official smartly retorted: `surtout, cc n'est pas une Ostpoli- tik.' The Germans have special national interests which their Ostpolitik is designed to pursue. They also have special prob- lems, above all with Czechoslovakia and Poland, because of history. France has neither special interests nor special prob- lems, only special advantages. France, one is told, insists more openly, consistently and emphatically than Genscher on respect for human rights: in which case it will be interesting to see what Mitterrand does in Prague. (As if to counterbalance the awkwardness of that visit, he has demon- stratively invited both Sakharov and Wale- sa to Paris to celebrate International Hu- man Rights Day on 10 December.) France also has a distinctive approach to Euro- pean security, for example insisting that conventional arms reduction talks should involve all the Helsinki signatory states rather than being 'bloc to bloc', between Nato and Warsaw Pact.

But apart from this, there is as yet no salient originality, whether in the treat- ment of economic relations with Eastern Europe, or in addressing the crucial ques- tion of how the West might act positively and directly to facilitate the process of desirable political change in Hungary or Poland. Something more may emerge in

the course of these further visits. But at the moment the practice of the new French Eastern policy seems to sit in a rather ill-defined middle ground between the German and the British approaches. The French approach remains 'specific,' but it is a world less specific than it was under De Gaulle, Perhaps this is a good thing. All West European states are in theory com- mitted by the Single European Act to Closer coordination of their foreign poli- cies. 'We must tune the violins', says Mitterrand. Perhaps what we are witnes- sing is a gradual 'Europeanisation of Ostpolitik', as many West German Christ- ian Democrats have said we should.

Perhaps. Yet what makes this a peculiar- ly interesting period in Europe is precisely the mixture of old and new motives, of increased cooperation and sharpened rival- ry. The classic form of French relations with Eastern Europe in modern history is,

after all, the alliance de revers — specifical- ly, an alliance with Germany's neighbours, against Germany. At first glance, what we have today bears no resemblance to that geometry of conflict. Here is France, ever more closely and harmoniously tied to the Federal Republic, joining it in an intensi- fied peaceful engagement in Eastern Europe. Yet things are never quite what they seem. French policy towards the Soviet Union and Eastern Europe remains, to a remarkable degree, policy about Ger- many. In the French response to the gathering momentum of German Ostpoli- tik there is an element of 'if you can't beat them join them'. But there is also the hope that by joining you can oversee, by embracing you can restrain. This is by no means an absurd or negligible calculation. It is, however, one in which the real interests of the actual peoples of Eastern Europe take second place. As usual.