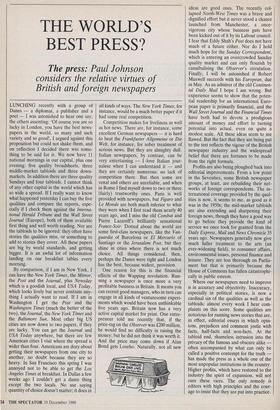 The press: Paul Johnson considers the relative virtues of British and foreign newspapers

LUNCHING recently with a group of Danes — a diplomat, a publisher and a poet — I was astonished to hear one say, the others assenting: 'Of course you are so lucky in London, you have the best news- papers in the world, so many and such variety and so good!, I argued against this proposition but could not shake them, and on reflection I decided there was some- thing to be said for it. We now have 11 national mornings in our capital, plus one evening: five quality broadsheets, three middle-market tabloids and three down- markets. In addition there are three quality Sundays and four tabloids. I cannot think of any other capital in the world which has so wide a spread. If I really want to know what happened yesterday I can buy the five qualities and compare the reports, espe- cially if I check them against the Interna- tional Herald Tribune and the Wall Street Journal (Europe), both of them available first thing and well worth reading. Nor are the tabloids to be ignored: they often have stories the qualities miss, or something to add to stories they cover. All these papers are big by world standards, and getting bigger. It is an awful lot of information landing on our breakfast tables every morning.

By comparison, if I am in New York, I can have the New York Times, the Mirror, the Post and the Journal, plus Newsday which is a goodish local, and USA Today, which looks lively but never contains any- thing I actually want to read. If I am in Washington I get the Post and the Washington Times (much the better of the two), the Journal, the New York Times and the Baltimore Sun. Most other big US cities are now down to two papers, if they are lucky. You can get the Journal and USA Today anywhere, but there are few American cities I visit where the spread is wider than four. Americans are dozy about getting their newspapers from one city to another, no doubt because they are so heavy. In San Francisco this spring I was annoyed not to be able to get the Los Angeles Times at breakfast. In Dallas a few weeks ago I couldn't get a damn thing except the two locals. No use saying quantity of choice doesn't matter; it does in all kinds of ways. The New York Times, for instance, would be a much better paper if it had some real competition.

Competition makes for liveliness as well as hot news. There are, for instance, some excellent German newspapers — it is hard to beat the Frankfurter Allgemeine or Die Welt, for instance, for sober treatment of serious news. But they are almighty dull. Italian newspapers, by contrast, can be very entertaining — I -love Italian jour- nalese when I can understand it — and they are certainly numerous: no lack of competition there. But then some are venal and others are unreliable, and when in Rome I find myself down to two or three (fairly) trustworthy ones. Paris is well provided with newspapers, but Figaro and Le Monde are both much inferior to what they were when I first read them nearly 40 years ago, and I miss the old Combat and Pierre Lazareffs brilliantly sensational France-Soir. Dotted about the world are some first-class newspapers, like the Van- guardia of Barcelona or El Mercurio of Santiago or the Jerusalem Post, but they shine in cities where there is not much choice. All things considered, then, perhaps the Danes were right and London has the best, because widest, provision.

One reason for this is the financial effects of the Wapping revolution. Run- ning a newspaper is once more a very profitable business in Britain. It means you can recruit good managers, who in turn can engage in all kinds of venturesome experi- ments which would have been unthinkable five years ago. Britain now has a very active capital market for print. One entre- preneur told me recently that, if the price-tag on the Observer was £200 million, he would find no difficulty in raising the money; but he did not think it was worth it. And the price may come down if Alan Bond gets Lonrho. Naturally, not all new ideas are good ones. The recently col- lapsed North-West Times was a brave and dignified effort but it never stood a chance launched from Manchester, a once- vigorous city whose business guts have been kicked out of it by its Labour council. I fear that Eddy Shah's Post does not have much of a future either. Nor do I hold much hope for the Sunday Correspondent, which is entering an overcrowded Sunday quality market and can only flourish by cannibalising the Observer's circulation. Finally, I will be astonished if Robert Maxwell succeeds with his European, due in May. As an admirer of the old Continen- tal Daily Mail I hope I am wrong. But experience seems to show that the poten- tial readership for an international Euro- pean paper is primarily financial, and the Wall Street Journal and the Financial Times have both had to devote a prodigious amount of money and effort to turning potential into actual, even on quite a modest scale. All these ideas seem to me flawed. But the fact that they are being put to the test reflects the vigour of the British newspaper industry and the widespread belief that there are fortunes to be made from the right formula.

Profits. arealso being ploughed back into editorial improvements. From a low point in the Seventies, some British newspaper groups, at least, are rebuilding their net- works of foreign correspondents. The in- ternational coverage provided by the qual- ities is now, it seems to me, as good as it was in the 1950s; the mid-market tabloids are also extending and sharpening their foreign news, though they have a good way to go before they provide the kind of service we once took for granted from the Daily Express, Mail and News Chronicle 35 years ago. Newspapers generally now give much fuller treatment to the arts (an ever-widening field), to consumer affairs, environmental issues, personal finance and leisure. They are less thorough on Parlia- ment but that is primarily because the House of Commons has fallen catastrophi- cally in public esteem.

Where our newspapers need to improve is in accuracy and objectivity. Inaccuracy, especially in political stories, is now a cardinal sin of the qualities as well as the tabloids: almost every week I hear com- plaints on this score. Some qualities are notorious for running news stories that are, in effect, editorial essays in which opin- ions, prejudices and comment jostle with facts, half-facts and non-facts. At the tabloid end, shameless intrusion into the privacy of the famous and obscure alike — often accompanied by what can only be called a positive contempt for the truth — has made the press as a whole one of the most unpopular institutions in the country. Higher profits, which have restored to the industry the spirit of expansion, will not cure these vices. The only remedy is editors with high principles and the cour- age to insist that they are put into practice.