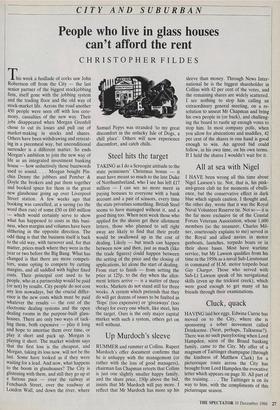 TAKING as I do a Scroogist attitude to the state pensioners' Christmas bonus — it must have meant so much to the late Duke of Northumberland, who I see has left £17 million — I can see no more merit in paying bonuses to everyone with a bank account and a pair of scissors, every time the state privatises something. British Steel seems to have managed without it, and a good thing too. When next week those who applied for the shares get their allotment letters, those who planned to sell right away are likely to find that their profit would be swallowed up in the cost of dealing. Likely — but much can happen between now and then, just as much (like the trade figures) Could happen between the setting of the price and the closing of applications, let alone the start of dealing. From start to finish — from setting the price at 125p, to the day when the allot- ment letters arrive — is a matter of three weeks. Markets do not stand still for three weeks. A system which pretends that they do will get dozens of issues to be faulted as 'flops' (too expensive) or 'giveaways' (too cheap) for every one which, like steel, hits the target. Ours is the only major capital market with such a system, others get on well without.