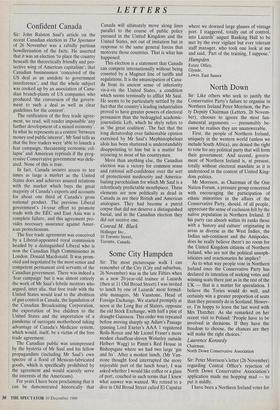 Sir: The most picturesque walk I can remember of the City (City and suburban, 26 November) was in the late Fifties when as a new 20-year-old trainee at Lazards (then at 11 Old Broad Street) I was invited to lunch by one of Lazards' most formid- able managers, Mr Vanstone, Head of Foreign Exchange. We started promptly at noon at the Long Bar of Slaters, opposite the old Stock Exchange, with half a pint of draught Guinness. This order was repeated before moving sharply up Adam's Passage (passing Lord Exeter's AAA 1 registered Rolls-Royce and Mr Lionel Fraser's more modest chauffeur-driven Wolseley outside Helbert Wagg) to Pimm's Red House in Bishopsgate where we had two large 'gin and Its'. After a modest lunch, (Mr Van- stone thought food interrupted the more enjoyable part of the lunch hour), I was asked whether I would like coffee or a glass of port, couched in such terms that I knew what answer was wanted. We retired to a dive in Old Broad Street called El Capataz where we downed large glasses of vintage port. I staggered, totally out of control, into Lazards' august Banking Hall to be met by the ever vigilant but ever tolerant staff manager, who took one look at me and said, 'Part of the training, I suppose.'