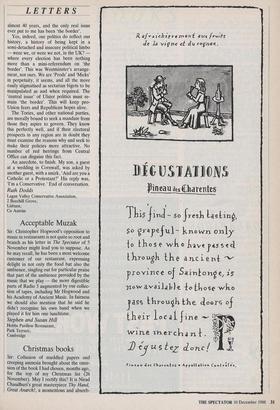 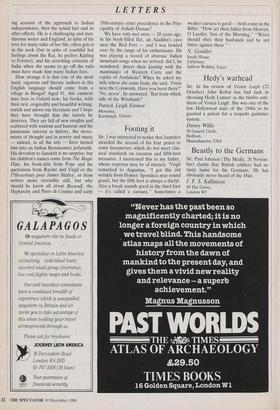 Sir: Collusion of muddled papers and creeping amnesia brought about the omis- sion of the book I had chosen, months ago, for the top of my Christmas list (26 November). May I rectify this? It is Nirad Chaudhuri's great masterpiece Thy Hand, Great Anarch!, a momentous and absorb-

ing account of the approach to Indian independence, then the actual fact and its after-effects. He is a challenging and met- tlesome writer and England, in spite of his love for many sides of her life, often gets it in the neck (but in spite of youthful hot feelings about the Raj, he prefers Kipling to Forster), and his scorching criticism of India when she seems to go off the rails must have made him many Indian foes.

How strange it is that one of the most lucid, vigorous and literate authors in the English language should come from a village in Bengal! Aged 91, this eminent man lives in Oxford now; his books, with their zest, originality and beautiful writing, enrich and adorn our literature and I hope they have brought him the laurels he deserves. They are full of new insights and scattered with wisdom and humour and his passionate interest in history, the move- ments of thought and in poetry and music — indeed, in all the arts — have turned him into an Indian Renaissance polymath. His devotion to Sanskrit is no surprise; but his children's names come from The Magic Flute, his book-title from Pope and his quotations from Racine and Virgil or the 17th-century poet James Shirley, or from writers more recondite still; but why should he know all about Beowulf, the Heptarchy and Piero di Cosimo and early

19th-century court precedence in the Prin- cipality of Anhalt-Dessau?

We have only met once — 20 years ago, in his book-filled flat, an Aladdin's cave near the Red Fort — and I was bowled over by the range of his enthusiasms. He was playing a record of abstruse Indian mountain songs when we arrived: did I, he wondered, detect their kinship with the mantincides of Western Crete and the coplas of Andalusia? When he asked my wife where she came from, she said, 'From near the Cotswolds. Have you been there?' 'No, never', he answered. 'But from which side of the Windrush?'