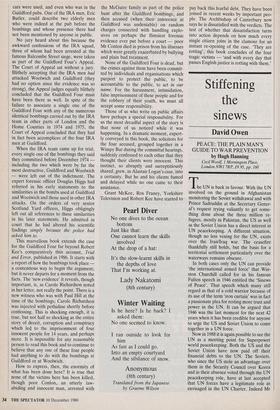 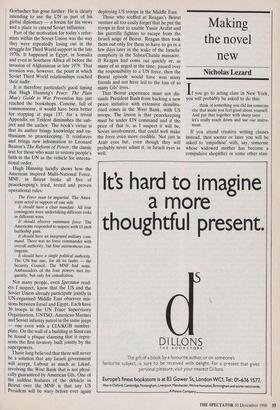 he UN is back in favour. With the UN involved on the ground in Afghanistan monitoring the Soviet withdrawal and with Prince Sadruddin at the Secretary Gener- al's request trying valiantly to get some- thing done about the three million re- fugees, mostly in Pakistan, the US as well as the Soviet Union has a direct interest in UN peacekeeping. A different situation, though no less vexing for the UN, exists over the Iran/Iraq war. The ceasefire thankfully still holds, but the basis for a territorial settlement particularly over the waterways remains obscure.

In both cases only the UN can provide 'the international armed force' that Win- ston Churchill called for in his famous Fulton speech in 1946 entitled the 'Sinews of Peace'. That speech which many still regard as that of a cold warrior because of its use of the term 'iron curtain' was in fact a passionate plea for resting more trust and power in the UN. It can be argued that 1946 was the last moment for the next 42 years when it has been credible for anyone to urge the US and Soviet Union to come together in a UN force.

Now in 1988 it is again possible to see the UN as a meeting point for Superpower world peacekeeping. Both the US and the Soviet Union have now paid off their financial debts to the UN. The Soviets, who since the US stole an advantage over them in the Security Council over Korea and in their absence voted through the UN peacekeeping role, have at last accepted that UN forces have a legitimate role as envisaged in the UN Charter. Indeed Mr Gorbachev has gone further. He is clearly intending to use the UN as part of his global diplomacy — a forum for his views and a place to extend Soviet influence.

Part of the motivation for today's refor- mists within the Soviet Union was the way they were repeatedly losing out in the struggle for Third World support in the late 1970s. It happened in Egypt, in Somalia and even in Southern Africa all before the invasion of Afghanistan in late 1979. That invasion was, however, the point at which Soviet Third World relationships reached their nadir.

It is therefore particularly good timing that Hugh Hanning's Peace: The Plain Man's Guide to War Prevention has just reached the bookshops. Concise, full of commonsense, it would have been better for stopping at page 137, for a trivial Appendix on Trident diminishes the sub- ject and the author. The book's virtue is that its author brings knowledge and en- thusiasm to peacekeeping. It reinforces and brings new information to Leonard Beaton's The Reform of Power, the classic text for those who want to restore people's faith in the UN as the vehicle for interna- tional order.

The Force must be impartial. The Amer- icans acted in support of one side.

It should have a clear mandate. All four contingents were undertaking different tasks in different ways.

It should observe minimum force. The Americans responded to snipers with 15-inch battleship guns.

It should have an integrated military com- mand. There was no force commander with overall authority, but four autonomous con- tingents.

It should have a single political authority. The UN has one, for all its faults — the Security Council. The MNF had none. Ambassadors of the four powers met fre- quently, but only for consultation.

Not many people, even Spectator read- ers I suspect, know that the US and the Soviet Union already participate jointly in UN-organised Middle East observer mis- sions between Israel and Egypt. Each have 36 troops in the UN Truce Supervisory Organisation, UNTSO. American Marines and Soviet infantry patrol in the same jeeps — one even with a CIA/KGB number- plate. On the wall of a building in Sinai can be found a plaque claiming that it repre- sents the first lavatory built jointly by the superpowers.

I have long believed that there will never be a solution that any Israeli government will accept, Labour as much as Likud, involving the West Bank that is not physi- cally guaranteed by American GIs. One of the saddest features of the debacle in Beirut over the MNF is that any US President will be wary before ever again deploying US troops in the Middle East.

Those who scoffed at Reagan's Beirut venture all too easily forget that he put the troops in first to enable Yassir Arafat and his guerrilla fighters to escape from the Israeli seige of Beirut. Reagan then took them out only for them to have to go in a few days later in the wake of the Israelis' complicity in the Sabra/Chatila massacre. If Reagan had come out quickly or, as many of us urged at the time, passed over the responsibility to a UN force, then the Beirut episode would have won many friends and not have led to the loss of so many GIs' lives.

That Beirut experience must not dis- suade President Bush from backing a new peace initiative with extensive demilita- rised zones in the West Bank, with US troops. The lesson is that peacekeeping must be under UN command and if the price of that is, as I suspect it will be, Soviet involvement, that could well make the force even more credible. Not just in Arab eyes but, even though they will probably never admit it, in Israeli eyes as well.