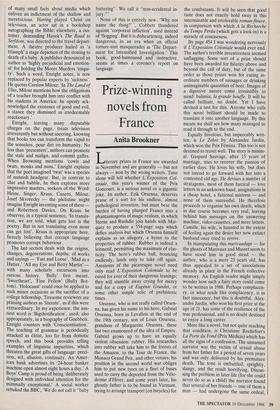 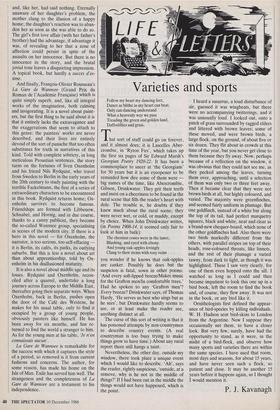 Literary prizes in France are awarded in November and are generally — but not always — won by the wrong writers. Time alone will tell whether L'Exposition Col- oniale, this year's winner of the Prix Goncourt, is a serious novel or a gigantic joke. Its author, Erik Orsenna, deserves praise of a sort for his endless, almost pathological invention, but must bear the burden of having plunged France into a phantasmagoria of magic realism, in which Sterne and Rushdie join hands with Mar- quez to produce a 554-page saga which defies analysis but which Orsenna himself explains as an allegory, a hymn to the properties of rubber. Rubber is indeed a leitmotif, permitting the maximum of elas- ticity. The hero's rubber ball, bouncing endlessly, lands only to take off again. Amateurs of the picaresque novel need only read L'Exposition Coloniale to be cured for ever of their dangerous leanings; they will stumble away crying for mercy and for a copy of Eugenie Grandet, or some other simple relic of prehistoric times.

Orsenna, who is not really called Orsen- na, has given his name to his hero, Gabriel Orsenna, born in Levallois at the end of the 19th century, son of Louis Orsenna, grandson of Marguerite Orsenna, these last two enamoured of the idea of Empire. Gabriel grows up to have an equally violent obsession: rubber. His researches into rubber will take him to the forests of the Amazon, to the Tour de France, the Monaco Grand Prix, and other venues; his position in the second world war obliges him to put new tyres on a fleet of buses used to carry the deported from the Velo- drome d'Hiver, and some years later, his ghostly father is to be found in Vietnam, trying to arrange transport (on bicycles) for the combatants. It will be seen that good taste does not exactly hold sway in this interminable and intolerable roman-fleuve, in comparison with which A la Recherche du Temps Perdu (which gets a look-in) is a miracle of conciseness.

By page 454 I was wondering nervously if L'Exposition Coloniale would ever end. The author's terrible inventiveness seemed unflagging. Some sort of a prize should have been awarded for hilarity above and beyond the call of duty, but of the same order as those prizes won for eating in- ordinate numbers of sausages or drinking unimaginable quantities of beer. Images of a digestive nature come irresistibly to mind: bulimia, la grande bouffe. It will be called brilliant, no doubt. Yet I have devised a test for this. Anyone who calls this novel brilliant should be made to translate it into another language. By this means we shall see how many managed to read it through to the end.

Equally frivolous, but impeccably writ- ten, is Le Zebre by Alexandre Jardin, which won the Prix Femina. This too is not destined to travel well. The story is minim- al. Gaspard Sauvage, after 15 years of marriage, tries to recover the passion of earlier days. He loves his wife, but does not intend to go forward with her into a contented old age. He devises a number of stratagems, most of them farcical — love letters in an unknown hand, assignations in a cheap hotel, a fictional mistress — and none of them successful. He therefore proceeds to organise his own death, which in due course becomes very real, leaving behind him messages on the answering machine, video cassettes, and more letters. Camille, his wife, is haunted to the extent of feeling again the desire her now extinct husband once tried to revive.

In manipulating this marivaudage — for the ghosts of Marivaux and Musset seem to have stood him in good stead — the author, who is a mere 23 years old, has thus appealed to a set of associations already in place in the French collective memory. An English reader might simply wonder how such a fairy story could come to be written in 1988. Perhaps complacen- cy, or what reads like complacency, is in fact innocence, but this is doubtful. Alex- andre Jardin, who won his first prize at the age of 21, has some of the resilience of the true professional, and is no doubt destined to enjoy a long career.

More like a novel, but not quite reaching that condition, is Christiane Rochefort's La Porte du Fond (Prix Medicis) which has all the signs of a confession. The unnamed narrator was the victim of sexual abuse from her father for a period of seven years and was only delivered by his premature death. The tone is embattled, sprightly, slangy, and the result horrifying. Discus- sing the problem in later life (for she could never do so as a child) the narrator found that several of her friends — one of them a man — had undergone the same ordeal, and, like her, had said nothing. Eternally unaware of her daughter's problem, the mother clung to the illusion of a happy home; the daughter's reaction was to aban- don her as soon as she was able to do so. The girl's first love affair (with her father's brother) had the advantage, if advantage it was, of revealing to her that a zone of affection could persist in spite of the assaults on her innocence. But there is no innocence in the story, and the brutal jovial tone leaves a disquieting impression. A topical book, but hardly a succes d'es- time.

And finally, Francois-Olivier Rousseau's La Gare de Wannsee (Grand Prix du Roman de l'Academie Frangaise) which is quite simply superb, and, like all integral works of the imagination, both calming and invigorating. It is a novel about paint- ers, but the first thing to be said about it is that it entirely lacks the extravagance and the exaggerations that seem to attach to this genre: the painters' works are never described, and their lives are entirely devoid of the sort of panache that too often substitutes for truth in narratives of this kind. Told with complete sobriety, in long meticulous Proustian sentences, the story turns on the fortunes of Sven Oxenholm and his friend Nils Rydquist, who travel from Sweden to Berlin in the early years of the 20th century to study painting with the terrible Fackelmann, the first of a series of extraordinary characters to be encountered in this book. Rydquist returns home; Ox- enholm survives to become famous. Friendships are formed with Libbenow, Schnabel, and Hornig, and in due course, thanks to a canny publicist, they become the so-called Wannsee group, specialising in scenes of the modern city. If there is a hero in this novel — for Oxenholm, the narrator, is too serious, too self-effacing — it is Berlin, its cafés, its parks, its outlying suburbs. But this is less a novel about art than about apprenticeship, told by Ox- enholm in his disillusioned maturity.

It is also a novel about middle age and its losses. Rydquist and Oxenholm, recon- ciled after a quarrel, undertake a long journey across Europe to the Middle East, thereafter going their separate ways. When Oxenholm, back in Berlin, pushes open the door of the Café des Westens, he makes for his usual table, only to find it occupied by a group of young people, obviously painters like himself. He has been away for six months, and has re- turned to find the world a stranger to him. As for the young men at his table, Ve n'en connaissaLs aucun'.

La Gare de Wannsee is remarkable for the success with which it captures the style of a period, so removed is it from current fashions and concerns. The author, for some reason, has made his home on the Isle of Man. Exile has served him well. The strangeness and the completeness of La Gare de Wannsee are a testament to his independence.