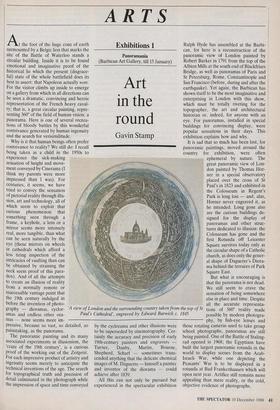 Art in the round

site of the Battle of Waterloo stands a circular building. Inside it is to be found emotional and imaginative proof of the historical lie which the present (disgrace- ful) state of the whole battlefield does its best to assert: that Napoleon actually won.

For the visitor climbs up inside to emerge on a gallery from which in all directions can be seen a dramatic, convincing and heroic representation of the French heavy caval-

ry; that is, a great circular painting, repre- senting 360° of the field of human vision: a

panorama. Here is one of several recrea- tions of bloody battles by this wonderful contrivance generated by human ingenuity and the search for verisimilitude.

Why is it that human beings often prefer contrivance to reality? We still do: I recall being taken as a child in the 1950s to experience the sick-making sensation of height and move- ment conveyed by Cinerama (I think my parents were more impressed than I was). For centuries, it seems, we have tried to convey the sensation of pictorial reality through illu- sion, art and technology, all of which seem to exploit that curious phenomenon that something seen through a frame, a keyhole, a lens or a mirror seems more intensely real, more tangible, than what can be seen naturally by the eye (those mirrors on wheels in cathedrals which afford a less tiring inspection of the intricacies of vaulting than can be obtained by straining the neck seem proof of this para- dox). And of all the attempts to create an illusion of reality from a normally remote or inaccessible vantage point that the 19th century indulged in before the invention of photo- graphy — dioramas, cyclor- amas and endless other ora- mas — none seems more im- pressive, because so vast, so detailed, so Painstaking, as the panorama.

The panoramic painting and its many associated experiments in illusionism, the 'craze of the 19th century', is a curious proof of the working out of the Zeitgeist. For each impressive product of artistry and ingenuity seems merely to anticipate the technical inventions of the age. The search for topographical truth and precision of detail culminated in the photograph while the impression of space and time conveyed 'A view of London and the surrounding country taken from Paul's Cathedral', engraved by Edward Barwick c. the top of St 1845 by the cyclorama and other illusions were to be superseded by cinematography. Cer- tainly the accuracy and precision of early 19th-century painters and engravers — Turner, Danby, Martin, Bourne, Shepherd, Scharf — sometimes trans- cended anything that the delicate chemical images of M. Daguerre — himself a painter and inventor of the diorama — could achieve after 1839.

All this can not only be pursued but experienced in the spectacular exhibition Ralph Hyde has assembled at the Barbi- can, for here is a reconstruction of the panoramic view of London painted by Robert Barker in 1791 from the top of the Albion Mills at the south end of Blackfriars Bridge, as well as panoramas of Paris and St Petersburg, Rome, Constantinople and San Francisco (before, during and after the earthquake). Yet again, the Barbican has shown itself to be the most imaginative and enterprising in London with this show, which must be totally riveting for the topographer, the art and architectural historian or, indeed, for anyone with an eye. For panoramas, installed in special buildings for convincing display, were popular sensations in their days. This exhibition explains how and why.

It is sad that so much has been lost, for panoramic paintings, moved around the country for exhibition, were often ephemeral by nature. The , great panoramic view of Lon- don painted by Thomas Hor- ner in a special observatory placed over the cross of St Paul's in 1823 and exhibited in the Colosseum in Regent's ' Park is long lost — and, alas, Horner never engraved it, as he intended. Long gone also are the curious buildings de- signed for the display of panoramas and other struc- tures dedicated to illusion: the Colosseum has gone and the first Rotunda off Leicester Square survives today only as the circular shape of a Catholic church, as does only the gener- al shape of Daguerre's Diora- ma behind the terraces of Park Square East.

But what is encouraging is that the panorama is not dead. We still seem to crave the sensation of being somewhere else in place and time. Despite all the accurate representa- tions of 360P reality made possible by modern photogra- phy, by fish-eye lenses and those rotating cameras used to take group school photographs, panoramas are still ' being painted. One of the Battle of Staling- , rad opened in 1968; the Egyptians have I built the largest panoramic rotunda in the world to display scenes from the Arab- Israeli War, while one depicting the Peasants' War is to be displayed in a rotunda at Bad Frankenhausen which will open next year. Artifice still remains more appealing than mere reality, or the cold, objective evidence of photographs.