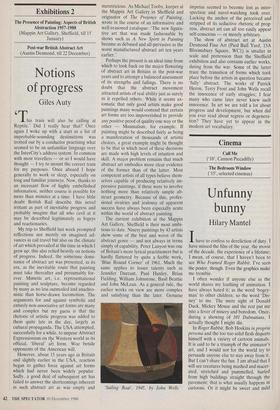 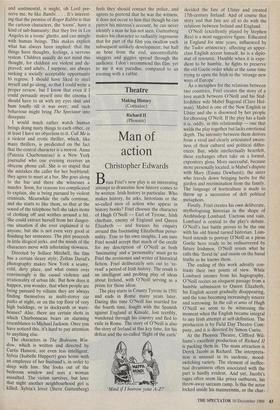 Ihave to confess to dereliction of duty. I have missed the film of the year, the movie of the decade, the experience of a lifetime; I mean, of course, that I haven't been to see Who Framed Roger Rabbit. I've seen the poster, though. Even the graphics make me tremble.

I often wonder if anyone else in the world shares my loathing of animation. I have always hated it; as the word 'bogey- man' to other children, so the word 'Dis- ney' to me. The mere sight of Donald Duck, Mickey Mouse and the rest put me into a fever of misery and boredom. Once, during a showing of 101 Dalmatians, I actually thought I might die.

In Roger Rabbit, Bob Hoskins in propria persona and the too too solid flesh disports himself with a variety of cartoon animals. It is said to be a triumph of the animator's art, and I would not for the world try to persuade anyone else to stay away from it. But I can't share the fun. I am afraid that I will see creatures being mashed and macer- ated, stretched and pummelled, hurled from high buildings straight through the pavement; that is what usually happens in cartoons. Or it might be sweet and mild and sentimental, it might, oh Lord pre- serve me, be like Bambi. . . . It's interest- ing that the premise of Roger Rabbit is that the cartoon characters, the `toons', have a kind of sub-humanity; that they live in Los Angeles in a toons' ghetto, and can mingle with human beings. This makes explicit what has always been implied: that the things have thoughts, feelings, a nervous system. Children usually do not mind this thought, for children are violent and de- praved; and adults, I suppose, are always seeking a socially acceptable opportunity to regress. I should have liked to steel myself and go along, so that I could write a proper review, but I know that even if I could persuade myself into the cinema I should have to sit with my eyes shut and hum loudly till it was over; and such behaviour might bring The Spectator into disrepute.

I would much rather watch human beings doing nasty things to each other, or at least I have no objection to it. Call Me is a violent and erotic thriller, which, like many thrillers, is predicated on the fact that the central character is a moron. Anna (Patricia Charbonneau) is a New York journalist who one evening receives an obscene phone call. She is so stupid that she mistakes the caller for her boyfriend; they agree to meet at a bar. She goes along to the bar and there she witnesses a murder. Soon, for reasons too complicated to explain, she is being pursued by violent criminals. Meanwhile the calls continue, and she starts to like them, so that at the sound of the telephone bell she takes items of clothing off and writhes around a bit. She could extract herself from her danger- ous situation if she ever explained it to anyone, but she is not even very good at finishing her sentences. The plot proceeds in little illogical jerks, and the minds of the characters move with infuriating slowness.

Directed by Sollace Mitchell, the film has a certain sleazy style; Zoltan David's photography makes New York a seamy, cold, dirty place, and what comes over convincingly is the casual violence and irrationality of urban life. But how does it happen, you wonder, that when people are being pursued by villains they are always finding themselves in multi-storey car parks at night, or on the top floor of very high buildings, or in dockyards or ware- houses? Also, there are certain shots in which Charbonneau bears an alarming resemblance to Michael Jackson. Once you have noticed this, it's hard to pay attention to anything else.

The characters in The Bedroom Win- dow, which is written and directed by Curtis Hanson, are even less intelligent. Sylvia (Isabelle Huppert) goes home with an employee of her husband's, in order to sleep with him. She looks out of the bedroom window and sees a woman assaulted. The victim survives, but later that night another neighbourhood girl is killed. Sylvia's lover (Steve Guttenberg)

feels they should contact the police, and agrees to pretend that he was the witness; it does not occur to him that though he can parrot his mistress's account, he can never identify a man he has not seen. Guttenberg makes his character so radiantly ingenuous that for part of the film you swallow each subsequent unlikely development; but half an hour from the end, uncontrollable sniggers and giggles spread through the audience. I don't recommend this film; yet to me it was paradise, compared to an evening with a rabbit.