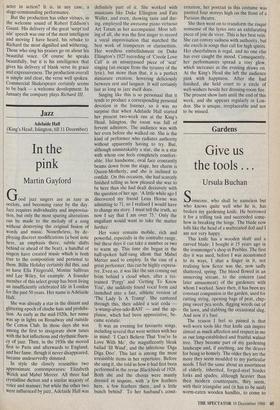 Good jazz singers are as rare as Ocelots, and becoming rarer by the day. Jazz requires individuality and improvisa- tion, but only the most sparing alterations can be made to the melody of a song without destroying the original fusion of words and music. Nonetheless, by de- ploying discreet modifications (a bent note here, an emphasis there, subtle shifts behind or ahead of the beat), a handful of singers have created music which is both true to the composition and personal to them. Billie Holiday certainly did this, and so have Ella Fitzgerald, Maxine Sullivan and Lee Wiley, for example. A founder member of this select group has been living an insufficiently celebrated life in London for the past 50 years. Her name is Adelaide Hall.

She was already a star in the distant and glittering epoch of cloche hats and prohibi- tion. As early as the mid-1920s, her name was up in lights on Broadway and outside the Cotton Club. In those days she was among the first to invigorate show tunes with the hot inflections and rhythmic fluen- cy of jazz. Then, in the 1930s she moved first to Paris and afterwards to England, and her fame, though it never disappeared, became undeservedly dimmed.

In style she closely resembles two approximate contemporaries: Elizabeth Welch and Mabel Mercer. All three had crystalline diction and a similar majesty of voice and manner; but while the other two were influenced by jazz, Adelaide Hall was definitely part of it. She worked with musicians like Duke Ellington and Fats Waller, and even, showing taste and dar- ing, employed the awesome piano virtuoso Art Tatum as her accompanist. Most tell- ing of all, she was the first singer to record a vocal improvisation that matched the best work of trumpeters or clarinettists. Her wordless embellishment on Duke Ellington's 1927 recording of 'Creole Love Call' is an unsurpassed piece of 'scat' singing (an escape from the tyranny of the lyric), but more than that, it is a perfect miniature creation, hovering deliciously between zest and languor. It will certainly last as long as jazz itself does.

Singing like this is so personaal that it tends to produce a corresponding personal devotion in the listener, so it was no surprise that when Adelaide Hall started her present two-week run at the King's Head, Islington, the room was full of fervent admirers. The audience was with her even before she walked on. She is the kind of performer who radiates authority without apparently having to try. But, although unmistakably a star, she is a star with whom one feels completely comfort- able. Her handsome, oval face constantly beams down from the stage, her charm is Queen-Motherly, and she is inclined to confide. On this occasion, she had scarcely finished telling us how pleased she was to be here than she had dealt decisively with the question of her age. 'A little while ago I discovered my friend Lena Home was admitting to 71, so I realised I would have to change my story. I must tell the truth, so now I say that I am over 75.' Only the ungallant would want to take the matter further.

Her voice remains mobile, rich and powerful, especially in the contralto range, but these days it can take a number or two to warm up. This time she began in the half-spoken half-sung idiom that Mabel Mercer used to employ. In the case of a great performer, this can be highly express- ive. Even so, it was like the sun coming out from behind a cloud when, after a res- trained 'Porgy' and 'Getting To Know You', she suddenly found vocal form and launched into a fast, athletic version of 'The Lady Is A Tramp'. She cantered through this, then added a scat coda — 'a-wump-abye-ado-BAH' — and the ap- plause, which had been appreciative, be- came ecstatic.

It was an evening for favourite songs, including several that were written with her in mind: 'I Can't Believe That You're In Love With Me', the magnificently bleak ballad 'Ill Wind', and the infectious 'Dip Diga Doo'. This last is among the most irresistible items in her repertoire. Before she sang it, she told us how it had first been performed in the revue Blackbirds of 1928. Both she and the chorus were mainly dressed in sequins, with 'a few feathers here, a few feathers there, and a little bunch behind'. To her husband's const-

ernation, her portrait in this costume was painted four storeys high on the front of a Parisian theatre.

She then went on to transform the risque nonsense of the lyrics into an exhilarating piece of joie de vivre. This is her best vein. She can convey sadness with authority, but she excels in songs that call for high spirits. Her cheerfulness is regal, and no one else has ever caught the mood. Consequently, her performances spread a rosy glow, which increases as the evening draws on. At the King's Head she left the audience pink with happiness. After she had finished, she held court to a circle of well-wishers beside her dressing-room fire. The present show lasts until the end of this week, and she appears regularly in Lon- don. She is unique, irreplaceable and not to be missed.