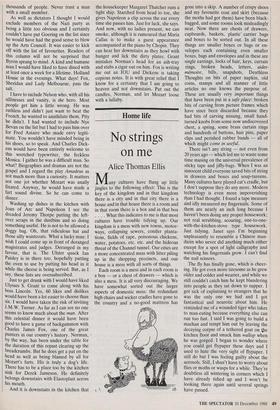 No strings on me

Each room is a mess and in each room is a box — or a chest of drawers — which is also a mess. It is all very discouraging. We have somewhat sorted out the larger aspects of domestic mess: the redundant high chairs and wicker cradles have gone to the country and a no-good mattress has gone into a skip. A number of crispy shoes and my favourite coat and skirt (because the moths had got them) have been black- bagged, and some rooms look misleadingly neat. Now there are chests of drawers, cupboards, baskets, plastic carrier bags and boxes to be sorted out. In all these things are smaller boxes or bags or en- velopes each containing even smaller boxes, bags and envelopes and in these are single earrings, locks of hair, keys, curtain rings, broken beads, letters, aides- memoire, bills, snapshots, Deathless Thoughts on bits of paper napkin, old coins, stamps and all manner of little articles no one knows the purpose of. These are usually very important things that have been put in a safe place: broken bits of carving from picture frames which have since been discarded because they had bits of carving missing, small hand- turned knobs from some now undiscovered chest, a spring, some brass curtain rings and hundreds of buttons, hair pins, paper clips and perished rubber bands — all of which might come in useful.

There isn't any string — not even from 20 years ago — which led me to waste some time musing on the universal prevalence of sticky tape and jiffy-bags. When I was an innocent child everyone saved bits of string in drawers and boxes and soup-tureens. Many cultures have played cat's cradle, but I don't suppose they do any more. Modern technology is even more impoverishing than I had thought. I found a tape measure and idly measured my fingernails. Some of them are nearly an inch long because I haven't been doing any proper housework; not real scrubbing, scouring, one-to-one- with-the-kitchen-stove type housework. Just tidying. Janet says I'm beginning unpleasantly to resemble a Chinese man- darin who never did anything much either except for a spot of light calligraphy and watching his fingernails grow. I can't find the nail scissors.

The fly has finally gone, which is cheer- ing. He got even more tiresome as he grew older and colder and wearier, and while we still couldn't catch him he kept blundering into people as they sat down to supper. I got sick of explaining to strangers that he was the only one we had and I got fantastical and neurotic about him. He reminded me of a wounded tiger who takes to man-eating because everything else can run too fast. I said I was going to build a machan and tempt him out by leaving the decaying corpse of a tethered goat on the kitchen floor and smack him wallop when he was gorged. I began to wonder where you could get flypaper these days and I used to hate the very sight of flypaper. I still do but I was feeling guilty about the aerosols. Still, I shan't have to worry about flies or moths or wasps for a while. They're doubtless all wintering in corners which I have already tidied up and I won't be looking there again until several springs have passed.