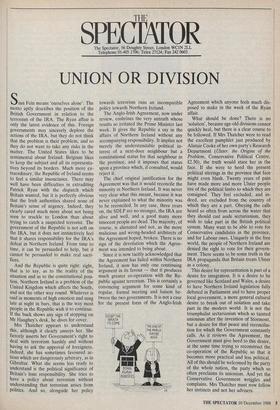 inn Fein means 'ourselves alone'. The motto aptly describes the position of the British Government in relation to the terrorism of the IRA. The Ryan affair is only the latest evidence of this. Foreign governments may sincerely deplore the actions of the IRA, but they do not think that the problem is their problem, and so they do not want to take any risks in the matter. The United States likes to be sentimental about Ireland. Belgium likes to keep the subject and all its representa- tives beyond its borders. Much more ex- traordinary, the Republic of Ireland seems to feel a similar insouciance. There may well have been difficulties in extraditing Patrick Ryan with the dispatch which Britain wanted, but it is perfectly obvious that the Irish authorities shared none of Britain's sense of urgency. Indeed, they clearly cared much more about not being seen to truckle to London than about trying to catch a suspected terrorist. The government of the Republic is not soft on the IRA, but it does not instinctively feel that it shares responsibility for the IRA's defeat in Northern Ireland. From time to time, it can be persuaded to help, but it cannot be persuaded to make real sacri- fices.

And the Republic is quite right: right, that is to say, as to the reality of the situation and as to the constitutional posi- tion. Northern Ireland is a problem of the United Kingdom which affects the South, and not the other way round. Whatever is said in moments of high emotion and sung late at night in bars, that is the way most people in the Republic wish it to continue. If the buck shows any sign of stopping on Mr Haughey's desk, he dives for cover.

Mrs Thatcher appears to understand this, although it clearly annoys her. She fiercely asserts her Government's right to deal with terrorism harshly and without having to ask the approval of foreigners. Indeed, she has sometimes favoured ac- tions which are dangerously arbitrary, as in Gibraltar. What she seems less ready to understand is the political significance of Britain's lone responsibility. She tries to have a policy about terrorism without understanding that terrorism arises from Politics. And so, alongside her policy towards terrorism runs an incompatible policy towards Northern Ireland.

The Anglo-Irish Agreement, now under review, enshrines the very untruth whose results so irritated the Prime Minister last week. It gives the Republic a say in the affairs of Northern Ireland without any accompanying responsibility. It implies not merely the understandable political in- terest of a next-door neighbour but a constitutional status for that neighbour in the province, and it imposes that status upon a province which, if consulted, would reject it.

The chief original justification for the Agreement was that it would reconcile the minority in Northern Ireland. It was never very clear what this meant, because it was never explained to what the minority was to be reconciled. In any case, three years on, the SDLP are no stronger, the IRA are alive and well, and a good many more innocent people are dead. The majority, of course, is alienated and not, as the more malicious and wrong-headed architects of the Agreement hoped, broken. There is no sign of the devolution which the Agree- ment was intended to bring about.

Since it is now tacitly acknowledged that the Agreement has failed within Northern Ireland, it now has only one continuing argument in its favour — that it produces much greater co-operation with the Re- public against terrorism. This is certainly a convincing argument for some kind of regular, formal meeting and liaison be- tween the two governments. It is not a case for the present form of the Anglo-Irish Agreement which anyone feels much dis- posed to make in the week of the Ryan affair.

What should be done? There is no 'solution', because age-old divisions cannot quickly heal, but there is a clear course to be followed. If Mrs Thatcher were to read the excellent pamphlet just produced by Alistair Cooke of her own party's Research Department (Ulster: the Origins of the Problem, Conservative Political Centre, £2.50), the truth would stare her in the face. If she were to heed the present political stirrings in the province that face might even blush. Twenty years of pain have made more and more Ulster people tire of the political limbo to which they are consigned. They feel excluded, and in- deed, are excluded from the country of which they are a part. Obeying the calls heard so often from across the water that they should cast aside sectarianism, they wish to take part in the British political system. Many want to be able to vote for Conservative candidates in the province, and for Labour ones. Uniquely in the free world, the people of Northern Ireland are denied the right to vote for their govern- ment. There seems to be some truth in the IRA propaganda that Britain treats Ulster as a colony.

This desire for representation is part of a desire for integration. It is a desire to be governed like Scotland and Wales, a desire to have Northern Ireland legislation fully debated in Parliament and to have proper local government, a more general cultural desire to break out of isolation and take part in the modern world. It is not the triumphalist sectarianism which so tainted unionism after the invention of Stormont, but a desire for that peace and reconcilia- tion for which the Government constantly calls. As it reviews the Agreement, the Government must give heed to this desire, at the same time trying to reconstruct the co-operation of the Republic so that it becomes more practical and less political. All of this should be welcomed by the party of the whole nation, the party which so often proclaims its unionism. And yet the Conservative Government wriggles and complains. Mrs Thatcher must now follow her instincts and not her advisers.