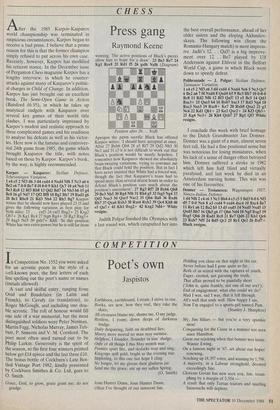 After the 1985 Karpov-Kasparov world championship was terminated in suspicious circumstances, Karpov began to receive a bad press. I believe that a prime reason for this is that the former champion simply refused to put across his own case. Recently, however, Karpov has modified his reticent stance. In the December issue of Pergamon Chess magazine Karpov has a lengthy interview, in which he counter- attacks against many of Kasparov's politic- al charges in Child of Change. In addition, Karpov has just brought out an excellent book, The Semi-Open Game in Action (Batsford £6.95), in which he takes up analytical cudgels with Kasparov over several key games of their world title clashes. I was particularly impressed by Karpov's modest and realistic approach to these complicated games and his readiness to analyse his defeats as well as his victor- ies. Here now is the famous and controver- sial 24th game from 1985, the game which brought Kasparov the title, with notes based on those by Karpov. Karpov's book, by the way, is highly recommended.

Judith Polgar finished the Olympics with a last round win, which catapulted her into the best overall performance, ahead of her older sisters and the eloping Akhmilov- skaya. The following win (from the Romania-Hungary match) is most impress- ive. Judit's 12. . . Qa5! is a big improve- ment over 12. . . Be7 played by Ulf Andersson against Ehlvest in the Belfort World Cup, a game in which Black went down to speedy defeat.

I conclude this week with brief homage to the Dutch Grandmaster Jan Donner.

Donner was a giant of a man, almost seven feet tall. He had a fine positional sense but was notorious for losing miniatures, when his lack of a sense of danger often betrayed him. Donner suffered a stroke in 1982 which left him half blind and virtually paralysed, and last week he died in an Amsterdam nursing home. This win was one of his favourites: