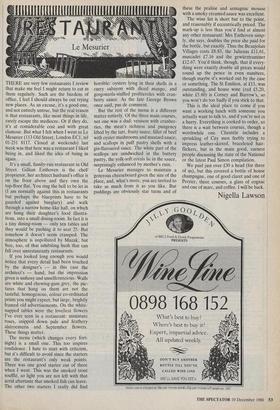 THERE arc very few restaurants I review that make me

feel I might return to eat in them regularly. Such are the burdens of office, I feel I should always be out trying new places. As an excuse, it's a good one, and not entirely untrue, but the real reason is that restaurants, like most things in life, rarely escape the mediocre. Or if they do, it's at considerable cost and with great clamour. But what I felt when I went to Le Mesurier (113 Old Street, London Ed, tel 01-251 8117. Closed at weekends) last week was that here was a restaurant I liked being in, and liked the idea of being in again.

It's a small, family-run restaurant in Old Street. Gillian Enthoven is the chef/ proprietor, her architect husband's office is on the floor above and they own the top-floor flat. You ring the bell to be let in (I am normally against this in restaurants but perhaps the blueprints have to be guarded against burglary) and walk through a narrow home-like hall, on which are hung their daughter's food illustra- tions, into a small dining-room. In fact it is a tiny dining-room — only ten tables and they would be pushing it to seat 25. But somehow it doesn't seem cramped. The atmosphere is unpolluted by Muzak, but free, too, of that inhibiting hush that can fall over unrestauranty restaurants.

If you looked long enough you would notice that every detail had been touched by the designer's — in this case the architect's — hand, but the impression given is unfussy and unselfconscious. Walls are white and chewing-gum grey, the pic- tures that hang on them are not the tasteful, homogenous, colour co-ordinated prints you might expect, but large, brightly framed old advertisements. On the white- napped tables were the loveliest flowers I've ever seen in a restaurant: miniature roses, snipped down pale and feathery alstroemeria and September flowers. These things matter.

The menu (which changes every fort- night) is a small one. This too inspires confidence. I hate to start with criticism, but it's difficult to avoid since the starters are the restaurant's only weak points. There was one good starter out of three when I went. This was the smoked trout souffle, so light you are not left with that acrid aftertaste that smoked fish can leave. The other two starters I really did find horrible: oysters lying in their shells in a curry sabayon with diced mango, and gorgonzola-stuffed profiteroles with cran- berry sauce. As the late George Brown once said, pas de comment.

But the rest of the menu is a different matter entirely. Of the three main courses, not one was a dud: venison with cranber- ries, the meat's richness and pungency lifted by the tart, fruity sauce; fillet of beef with oyster mushrooms and mustard sauce; and scallops in puff pastry shells with a gin-flavoured sauce. The white part of the scallops are sandwiched in the buttery pastry, the yolk-soft corals lie in the sauce, surprisingly enhanced by mother's ruin. Le Mesurier manages to maintain a generous cheeseboard given the size of the place, and, what's more, you are invited to take as much from it as you like. But puddings are obviously star turns and of these the praline and armagnac mousse with a smoky creamed sauce was excellent.

The wine list is short but to the point, and reasonably if eccentrically priced. The mark-up is less than you'd find at almost any other restaurant: Mrs Enthoven simp- ly, she says, doubles the price she paid for the bottle, but exactly. Thus the Beaujolais Villages costs £8.83, the Julienas £11.61, muscadet £7.16 and the gewilrztratniner £12.67. You'd think, though, that if every- thing were exactly double all prices would round up the pence in even numbers, though maybe it's worked out by the case or something. The St Emilion, at £13, was outstanding, and house wine (red £5.20, white £5.60) is Corney and Barrow's, so you won't do too badly if you stick to that.

This is the ideal place to come if you want a working lunch with someone you actually want to talk to, and if you're not in a hurry. Everything is cooked to order, so there is a wait between courses, though a worthwhile one. Clientele includes a sprinkling of City men feebly trying to impress leather-skirted, braceleted hair- flickers, but in the main good, earnest people discussing the state of the National or the latest Paul Simon compilation.

We paid just over £30 a head (for three of us), but this covered a bottle of house champagne, one of good claret and one of Perrier, three courses, a glass of cognac and one of marc, and coffee. I will be back.