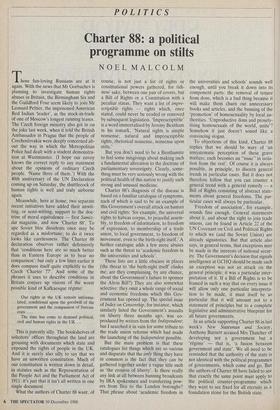 Charter 88: a political programme on stilts

Those fun-loving Russians are at it again. With the news that Mr Gorbachev is planning to investigate human rights abuses in Britain, the Birmingham Six and the Guildford Four seem likely to join Mr Leonard Peltier, the imprisoned American Red Indian leader', as the stock-in-trade of one of Moscow's longest running teases. The Czech foreign ministry also got in on the joke last week, when it told the British Ambassador in Prague that the people of Czechoslovakia were deeply concerned ab- out the way in which the Metropolitan Police had dealt with a student demonstra- tion at Westminster. (I hope our envoy knows the correct reply to any statement about the opinions of ordinary Czech people. `Name three of them.') With the 40th anniversary of the UN Declaration coming up on Saturday, the shuttlecock of human rights is well and truly airborne again.

Meanwhile, here at home, two separate recent initiatives have added their unwit- ting, or semi-witting, support to the doc- trine of moral equivalence — first Samiz- dat magazine, and now `Charter 88'. To ape Soviet bloc dissidents once may be regarded as a misfortune; to do it twice looks like carelessness. The Charter 88 declaration observes rather defensively that `conditions here are so much better than in Eastern Europe as to bear no comparison': but only a few lines earlier it does compare itself quite explicitly to the Czech 'Charter 77'. And some of the phrases it uses to describe conditions in Britain conjure up visions of the worst possible kind of Kafkaesque regime:

Our rights in the UK remain unformu- lated, conditional upon the goodwill of the government and the compassion of bureau- crats ....

The time has come to demand political, civil and human rights in the UK ...

This is patently silly. The bookshelves of solicitors' offices throughout the land are groaning with documents which state and expound the rights of people in the UK. And it is surely also silly to say that we have an unwritten constitution. Much of our constitution is written down in detail, in statutes such as the Representation of the People Act and the Parliament Act of 1911: it's just that it isn't all written in one single document.

What the authors of Charter 88 want, of course, is not just a list of rights or constitutional powers gathered, for tidi- ness' sake, between one pair of covers, but a Bill of Rights or a Constitution with a peculiar status. They want a list of impre- scriptible rights — rights which, once stated, could never be eroded or removed by subsequent legislation. Imprescriptible' is a word immortalised by Jeremy Bentham in his remark, `Natural rights is simple nonsense; natural and imprescriptible rights, rhetorical nonsense, nonsense upon stilts.'

But you don't need to be a Benthamite to feel some misgivings about making such a fundamental alteration to the doctrine of parliamentary sovereignty. Clearly, some- thing must be very seriously wrong with the political health of this nation to justify such strong and unusual medicine.

Charter 88's diagnosis of the disease is based on a familiar catalogue of symptoms, each of which is said to be an example of this Government's overall attack on human and civil rights: 'for example, the universal rights to habeas corpus, to peaceful assem- bly, to freedom of information, to freedom of expression, to membership of a trade union, to local government, to freedom of movement, even to the birth-right itself.' A further catalogue adds a few more abuses such as the threat to `academic freedom in the universities and schools'.

These lists are a little obscure in places (the threat to 'the birth-right itself' eludes me; are they complaining, by any chance, about the Government's failure to sponsor the Alton Bill?) They are also somewhat selective: they omit a whole range of social and economic freedoms which this Gov- ernment has opened up. The special issue of Index on Censorship, for instance, which similarly listed the Government's assaults on liberty three months ago, was co- produced by writers from the Independent; but I searched it in vain for some tribute to the trade union reforms which had made the launching of the Independent possible.

But the main problem is that these catalogues list things which are so various and disparate that the only thing they have in common is the fact that they can be gathered together under a vague title such as 'the erosion of liberty'. Is there really any link at all between banning broadcasts by IRA spokesmen and transferring pow- ers from Ilea to the London boroughs? That phrase about 'academic freedom in the universities and schools' sounds well enough, until you break it down into its component parts: the removal of tenure from dons, which is a bad thing because it will make them churn out unnecessary books and articles, and the banning of the `promotion' of homosexuality by local au- thorities. `Unproductive dons and prosely- tising homosexuals of the world, unite'? Somehow it just doesn't sound like a convincing slogan.

To objections of this kind, Charter 88 replies that we should be wary of `an unsystematic perception of these grave matters; each becomes an "issue" in isola- tion from the rest'. Of course it is always possible, in principle, to discern general trends in particular cases. But it does not therefore follow that you can counter a general trend with a general remedy — a Bill of Rights consisting of abstract state- ments about general freedoms. The par- ticular cases will always be particular.

'Freedom of association', for example, sounds fine enough. General statements about it, and about the right to join trade unions, can be found in Article 22 of the UN Covenant on Civil and Political Rights to which we (and the Soviet Union) are already signatories. But that article also says, in general terms, that exceptions may be made in the interests of national secur- ity. The Government's decision that signals intelligence at GCHQ should be made such an exception was not an attack on the general principle; it was a particular inter- pretation of it. If a Bill of Rights is to be framed in such a way that on every issue it will allow only one particular interpreta- tion to be made, it must itself be so particular that it will amount not to a statement of principles but to a complete legislative and administrative blueprint for all future governments.

In an article supporting Charter 88 in last week's New Statesman and Society, Anthony Barnett accused Mrs Thatcher of developing not a government but a 'regime' — that is, 'a fusion between government and state'. We all need to be reminded that the authority of the state is not identical with the political programmes of governments, which come and go. But the authors of Charter 88 have failed to see that exactly the same point must apply to the political counter-programme which they want to see fixed for all eternity as a foundation stone for the British state.