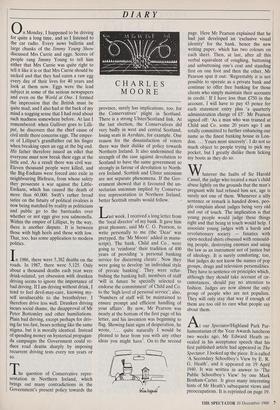 CHARLES MOORE n Monday, I happened to be driving for quite a long time, and so I listened to the car radio. Every news bulletin and large chunks of the Jimmy Young Show discussed Mrs Currie and eggs. Scores of people rang Jimmy Young to tell him either that Mrs Currie was quite right to tell it like it is or that Mrs Currie should be sacked and that they had eaten a raw egg every day of their lives for 40 years and look at them now. Eggs were the lead subject in some of the serious newspapers and even on the World at One. I formed the impression that the British must be quite mad; and I also had at the back of my mind a nagging sense that I had read about such madness somewhere before. At last I remembered: when Gulliver goes to Lilli- put, he discovers that the chief cause of civil strife there concerns eggs. The emper- or of Lilliput's grandfather cut his finger when breaking open an egg at the big end. His father therefore issued an edict that everyone must now break their eggs at the little end. As a result there was civil war. Eleven thousand people were killed, and the Big-Endians were forced into exile in neighbouring Blefescu, from whose safety they prosecute a war against the Little- Endians, which has caused the death of more than 60,000. Swift's rather broad satire on the fatuity of political rivalries is now being matched by reality as politicians and public go to the barricades over whether or not eggs give you salmonella. Within the empire of Lilliput, by the way, there is another dispute. It is between those with high heels and those with low. That, too, has some application to modern politics.

In 1986, there were 5,382 deaths on the roads. In 1987, there were 5,125. Only about a thousand deaths each year were drink-related, yet obsession with drunken driving seems to ignore the importance of bad driving. If I am driving without drink, I tend to feel devil-may-care, knowing my- self invulnerable to the breathalyser. I therefore drive less well. Drunken driving incurs social shame, the disapproval of Mr Peter Bottomley and other humiliations. Plain bad driving, except perhaps for driv- ing far too fast, bears nothing like the same stigma, but it is morally identical. Instead of spending money on hysterical propagan- da campaigns the Government could re- duce road deaths sharply by imposing recurrent driving tests every ten years or so.

The question of Conservative repre- sentation in Northern Ireland, which brings out many contradictions in the Government's present policy towards the province, surely has implications, too, for the Conservatives' plight in Scotland. There is a strong Ulster/Scotland link. At the last election, the Conservatives did very badly in west and central Scotland, losing seats in Ayrshire, for example. One reason for the dissatisfaction of voters there was their dislike of policy towards Northern Ireland. It also undermined the strength of the case against devolution to Scotland to have the same government so strongly in favour of devolution to North- ern Ireland. Scottish and Ulster unionism are not separate phenomena. If the Gov- ernment showed that it favoured the un- sectarian unionism implied by Conserva- tive representation in Northern Ireland, better Scottish results would follow.

Last week, I received a long letter from the 'local director' of my bank. It gave him great pleasure, said Mr C. G. Pearson, to write personally to me (the 'Dear' was pretyped, the 'Mr Moore' added in manu- script). The bank, Child and Co., were going to 'reinforce' their tradition of 400 years of providing 'a personal banking service for discerning clients'. Now they were going to develop 'an individual style of private banking'. They were refur- bishing the banking hall; members of staff 'will in future be specially selected to endorse the commitment' of Child and Co. to the 'high level of personal service'; also, 'Numbers of staff will be maintained to ensure prompt and efficient handling of your affairs'. By now, Mr Pearson was nearly at the bottom of the first page of his letter, and his invention was beginning to flag. Showing faint signs of desperation, he wrote, `... quite naturally I would be pleased to hear from you with any other ideas you might have'. On to the second page. Here Mr Pearson explained that he had just developed an 'exclusive visual identity' for the bank, hence the new writing paper, which has two colours on each sheet. Then, at last, after all this verbal equivalent of coughing, buttoning and unbuttoning one's coat and standing first on one foot and then the other, Mr Pearson spat it out: 'Regrettably it is not possible to operate as a private bank and continue to offer free banking for those clients who simply maintain their accounts in credit.' If I have less than £750 in the account, I will have to pay 45 pence for each statement entry plus 'a quarterly administration charge of £5'. Mr Pearson signed off: 'As a man who was trained at Child and Co. some 20 years ago I am totally committed to further enhancing our name as the finest banking house in Lon- don. ... Yours most sincerely'. I do not so much object to people trying to pick my pocket, but I greatly dislike them licking my boots as they do so.

Whatever the faults of Sir Harold Cassel, the judge who treated a man's child abuse lightly on the grounds that the man's pregnant wife had refused him sex, age is surely not one of them. Whenever a silly sentence or remark is handed down, peo- ple complain about judges being very old and out of touch. The implication is that young people would judge these things right and that being in touch would help. I associate young judges with a harsh and revolutionary society — fanatics with open-necked shirts obsessed with remould- ing people, destroying enemies and using the law as an instrument not of justice but of ideology. It is surely comforting, too, that judges do not know the names of pop groups, drugs and television personalities. They have to sentence on principles which, although they should take account of cir- cumstances, should pay no attention to fashion. Judges are now almost the only group of people who are not populists. They will only stay that way if enough of them are too old to care what people say about them.

At our Spectator/Highland Park Par- liamentarian of the Year Awards luncheon two weeks ago, Mr Edward Heath re- vealed in his acceptance speech that his first published article had appeared in The Spectator. I looked up the piece. It is called 'A Secondary Schoolboy's View by E. R. G. Heath', and it appeared on 19 April 1940. It was written in answer to 'The Public Schoolboy's View' by one Mark Bonham-Carter. It gives many interesting hints of Mr Heath's subsequent views and preoccupations. It is reprinted on page 19.