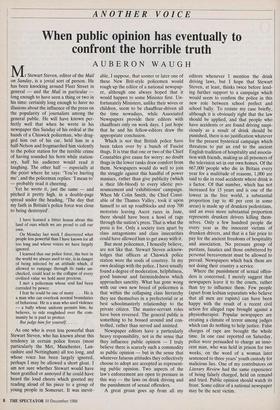 When public opinion has eventually to confront the horrible truth

Mr Stewart Steven, editor of the Mail on Sunday, is a jovial sort of person. He has been knocking around Fleet Street in general — and the Mail in particular — long enough to have seen a thing or two in his time: certainly long enough to have no illusions about the influence of the press on the popularity of journalists among the general public. He will have known per- fectly well that when he wrote in his newspaper this Sunday of his ordeal at the hands of a Chiswick policeman, who drag- ged him out of his car, held him in a half-Nelson and frogmarched him violently to the police station for the terrible crime of having sounded his horn while station- ary, half his audience would read it laughing. The other half — especially at the point where he says: 'You're hurting me'; and the policeman replies: `I mean to' — probably read it cheering.

Yet he wrote it, just the same — and pitched it pretty high, in a double-page spread under the heading, 'The day that my faith in Britain's police force was close to being destroyed'.

I have learned a bitter lesson about this land of ours which we are proud to call our own.

On Monday last week I discovered what people less powerful than I have known for all too long and whose voices we have largely ignored.

I learned that our police force, the best in the world we always used to say, is in danger of being infected by an attitude which, if allowed to rampage through its ranks un- checked, could lead to the collapse of every civilised value we hold most precious.

I met a policeman whose soul had been corroded by power.

I fear he could be one of many. . . . He is a man who can overlook normal boundaries of behaviour. He is a man who used violence — a bully whose uniform permits him, he believes, to ride roughshod over the com- munity he is paid to protect.

But judge him for yourself As one who is even less powerful than Stewart Steven, who has known about this tendency in certain police forces (most particularly the Met, Manchester, Lan- cashire and Nottingham) all too long, and whose voice has been largely ignored, perhaps I may be allowed a short gloat. I am not sure whether Stewart would have been gratified or annoyed if he could have heard the loud cheers which greeted my reading aloud of his piece to a group of young people in Somerset. It was inevit- able, I suppose, that sooner or later one of these New Brit-style policemen would rough up the editor of a national newspap- er, although one always hoped that it would happen to some Minister first. Un- fortunately Ministers, unlike their wives or children, seem to be chauffeur-driven all the time nowadays, while Associated Newspapers provide their editors with chauffeurs only on work days. I just hope that he and his fellow-editors draw the appropriate conclusion.

Which is not that British police have been taken over by a bunch of Fascist thugs. It is true that one or two of the Chief Constables give cause for worry: no doubt thugs in the lower ranks draw comfort from them. Newspapers would do well to join the struggle against this handful of power maniacs, rather than give publicity (which is their life-blood) to every idiotic pro- nouncement and 'exhibitionist' campaign. When Mr Colin Smith, the Chief Const- able of the Thames Valley, took it upon himself to set up roadblocks and stop 700 motorists leaving Ascot races in June, there should have been a howl of rage through the nation's press. That is what the press is for. Only a society torn apart by class antagonisms and class insecurities could have allowed him to get away with it.

But most policemen, I honestly believe, are not like that. Stewart Steven acknow- ledges that officers at Chiswick police station were the souls of courtesy. In my own dealings with the police, I have usually found a degree of moderation, helpfulness, good humour and fairmindedness which approaches sanctity. What has gone wong with our own new breed of policemen is that within the collapsing class hierarchy they see themselves in a prefectorial or at best schoolmasterly relationship to the private citizen. The master-servant roles have been reversed. The general public is something to be bossed around and con- trolled, rather than served and assisted.

A great groan goes up from all my editors whenever I mention the drink driving laws, but I hope that Stewart Steven, at least, thinks twice before lend- ing further support to a campaign which would seem to confirm the police in this new role between school prefect and school bully. To restate my case briefly, although it is obviously right that the law should be applied, and that people who have accidents or are found driving suspi- ciously as a result of drink should be punished, there is no justification whatever for the present hysterical campaign which threatens to put an end to the ancient English tradition of hospitality and associa- tion with friends, making us all prisoners of the television set in our own homes. Of the 667,000 'people who die in Britain every year for a multitude of reasons, 1,000 are said to die in road accidents where drink is a factor. Of that number, which has not increased for 15 years and is one of the lowest in the free world, a substantial proportion (up to 40 per cent in some areas) is made up of drunken pedestrians, and an even more substantial proportion represents drunken drivers killing them- selves. Only a few hundred people die every year as the innocent victims of drunken drivers, and that is a fair price to pay for the ancient freedoms of hospitality and association. No pressure group of puritans, fanatics and those embittered by personal bereavement must be allowed to prevail. Newspapers which back them are not doing their country a service.

Where the punishment of sexual offen- ders is concerned, I merely suggest that newspapers leave it to the courts, rather than try to influence them. Few people (apart from lesbian separatists who believe that all men are rapists) can have been happy with the result of a recent civil action for alleged rape brought against a physiotherapist. Popular newspapers are creating a climate of terror among judges which can do nothing to help justice. False charges of rape are brought the whole time. In one case reported on Saturday, police were persuaded to charge an inno- cent man, who was held in prison for two weeks, on the word of a woman later sentenced to three years' youth custody for malicious lies. One of my contributors on Literary Review had the same experience of being falsely charged, held on remand and tried. Public opinion should watch its front. Some editor of a national newspaper may be the next victim.