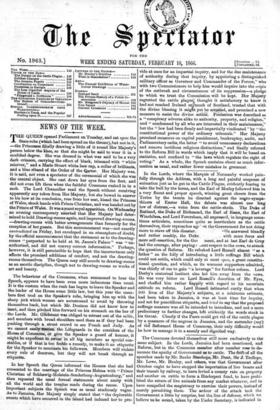 Page 1, 10 February 1866 — In her Speech the Queen informed the Houses that she
Close

In her Speech the Queen informed the Houses that she

had consented to the marriage of the Princess Helena with " Prince Christian of Schleswig-Holstein-Sonderburg-Augustenburg," and then repeated the usual formal statements about amity with all the world and the treaties made during the recess. Upon important subjects the Speech was as usual studiously vague. As to Jamaica, Her Majesty simply stated that " the deplorable events which have occurred in the island had induced her to pro-

vide at once for an impartial inquiry, and for the due maintenance of authority during that inquiry, by appointing a distinguished military officer as Governor and Commander of the Forces," who with two Commissioners to help him would inquire into the origin of the outbreak and circumstances of its suppression—a pledge to which we trust the Commission will be kept. Her Majesty regretted the cattle plague; thought it satisfactory to know it had not reached Ireland or'much of Scotland, trusted that with the divine blessing it might yet be =gated, and promised a new measure to assist the divine action. Fenianism was described as a " conspiracy adverse alike to authority, property, and religion," and " condemned by all who are interested in their maintenance," but the " law had been firmly and impartially vindicated " by " the constitutional power of the ordinary tribunals." Her Majesty promised measures on capital punishment, bankruptcy, audit, and Parliamentary oaths, the latter " to avoid unnecessary declarations and remove invidious religious distinctions," and finally referred to the Reform Bill in words which imply that it will be based on statistics, and confined to " the laws which regulate the right of voting." As a whole, the Speech contains about as much infor- mation as usual, and rather fewer mistakes in grammar.