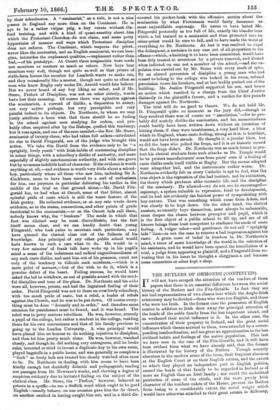 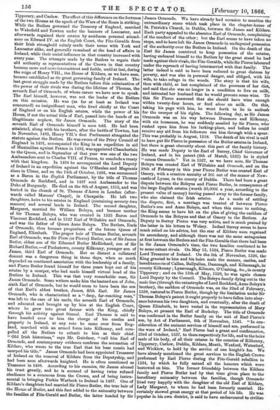 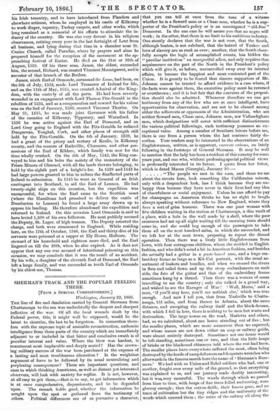 his Irish tenantry, and to have introduced from Flanders and elsewhere artizans, whom he employed in his castle of Kilkenny to work diaper, tapestry, Turkey carpets, and other works, which long remained as a memorial of his efforts to stimulate the in- dustry of the country. He was also very devout in his religious observances, retiring every year in the last fortnight of Lent from all business, and lying during that time in a chamber near St. Canice Church, called Paradise, where by prayers and alms he prepared himself for the reception of the sacrament at the ap- proaching festival of Easter. He died on the 21st or 26th of August, 1539. Of his three sons, James, the eldest, succeeded him, the second, Richard, was created Viscount Mountgarret, and is ancestor of that branch of the Butlers.

James, ninth Earl of Ormonde, surnamed the Lame, had been, on the 5th of July, 1532, made Lord Treasurer of Ireland for life, and on the 11th of May, 1535, was created Admiral of the King- dom, with the cuatoiy of all the ports. He had been severely wounded in an engagement with Lord Thomas Fitz-Gerald in the rebellion of 1534, and as a compensation and reward for his valour was on the 2nd of January, 1536, created Viscount Thurles. On May 31, 1535, he was made joint Governor with his father of the counties of Kilkenny, Tipperary, and Waterford. In 1536 he was active against the Earl of Desmond, and on Lord Grey going to England with the Fitz-Geralds he reduced Dungarvan, Youghal, Cork, and other places of strength still held by the Fitz-Geralds. On the 4th of January, 1539, he had a grant of the priory and rectory of Kenlis, in Kilkenny county, and the manors of Rathvillie, Clonmore, and other pos- sessions of the Earl of Kildare, which family was now for the time wholly crushed. On the 5th of May, 1542, the King con- veyed to him and his heirs the moiety of the monastery of the Friars Minors of Clonmel, with all the lands thereto belonging, to hold by the eighth part of a knight's fee. In 1539 and 1543 he had large powers granted to him to reduce the disaffected parts of Ireland to submission. In 1545 he went as General of an Irish contingent into Scotland, to aid the Earl of Lennox. He had twenty-eight ships on this occasion, but the expedition was unsuccessful, for when the Earl came to the Scottish coast (where the Ihmiltons had promised to deliver the castle of Dumbarton to Lennox) he found a large army drawn up to oppose his landing. He therefore abandoned the expedition and returned to Ireland. On this occasion Lord Ormonde is said to have levied 1,500 of his own followers. He next publicly accused the Deputy, St. Leger, of high treason. The Deputy retorted the charge, and both were summoned to England. While residing here, on the 17th of October, 1546, the Earl and thirty-five of his servants were poisoned at a supper at Ely House, Holborn. The steward of his household and eighteen more died, and the Earl lingered on till the 28th, when he also expired. As it does not appear that any one was accused of intentional poisoning on this occasion, we may conclude that it was the result of an accident. By his wife, a daughter of the eleventh Earl of Desmond, the Earl left a large family, and was succeeded as tenth Earl of Ormonde by his eldest son, Thomas.