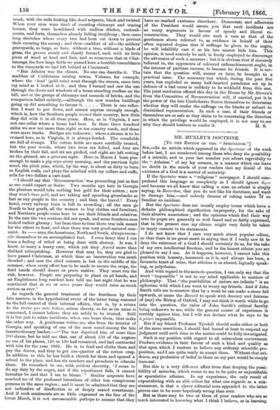 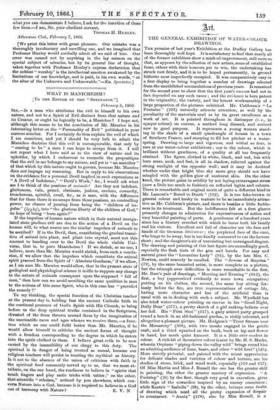 [To THE EDITOR OF THE SPECTATOR.1

Sin,—In an article which appeared in the Spectator of the week before last, I am numbered among those who deny the possibility of a miracle, and in your last number you advert regretfully to the " Atheism " of my lay sermon, in a manner which can leave no doubt in the minds of your readers that my denial of the existence of a God is a matter of.notoriety.

If the Spectator were a " religious " newspaper, I should com- prehend this language as completely as I should ignore it,— and because we all know that calling a man an atheist is simply saying, in Recordese, that you do not like his doctrines, and want to damage him,—and nobody dreams of taking notice Of so familiar an incident.

But the Spectator does not usually employ terms which have a definite philosophical signification improperly, for the sake bf their abusive annotation ; and the opinions which find their way into its pages are generally so well based and so fairly expressed, that in the present case my silence might very fairly be taken to imply consent to its statements.

I do not know that I care very much about popular odium, so that there is no great merit in saying that if I really saw fit to deny the existence of a God I should certainly do so, for the sake of my own intellectual freedom, and be the honest atheist you are pleased to say I am. As it happens, however, I cannot take this position with honesty, inasmuch as it is, and always has been, a favourite tenet of mine, that atheism is as absurd, logically speak- ing, as polytheism.

And with regard to the miracle question, I can only say that the word " impossible " is not to my mind applicable to matters of philosophy. That "the possibilities of nature are infinite" is an aphorism with which I am wont to weary my friends. And if John Smith tells me to-morrow that by a word he can make a stone fall upwards, or cause the Record to speak with decency and fairness of (say) the Bishop of Oxford, I may not think it worth while to go into the question, the value of John Smith's critical faculty being unknown to me, while the general course of experience is terribly against him, but I will not declare what he says to be a priori impossible.

But if my friend Professor Tyndall should make either or both of the same assertions, I should feel bound at least to suspend my judgment until such time as the matter could be fully investigated.

Such is my position with regard to all miraculous occurrences. Produce evidence in their favour of such a kind and quality as that upon which I venture to believe any ordinary scientific pro- position, and I am quite ready to accept them. Without that evi- dence, any profession of belief in them on my part would be simply immoral.

But this is a very different affair from that denying the possi- bilility of miracles, which seems to me to be quite as unjustifiable as speculative atheism. In my experience, the only result of expostulating with an able editor for what one regards as a mis- statement, is that a clever editorial note appended to the letter proves one to be more hopelessly wrong than ever.

But as there may be two or three of your readers who are as much interested in knowing what I think I believe, as in learning

what you can demonstrate I believe, I ask for the insertion of these few lines.—I am, Sir, your obedient servant,

[We print this letter with great pleasure. Our mistake was a thoroughly involtmtary and unwilling one, and we imagined that Professor Huxley would cordially admit all we said of him. Our error was caused not by anything in the lay sermon on the special subject of miracles, but by its general line of thought, taken together with Professor Huxley's express declaration that the noblest " worship" is the intellectual emotion awakened by the limitations of our knowledge, and is paid, in his own words, " at the altar of the Unknown and Unknowable."—ED. Spectator.]