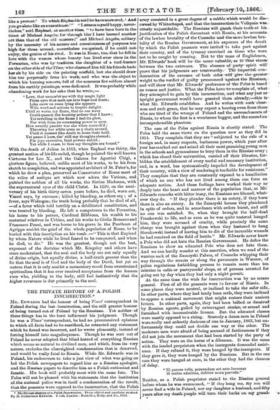 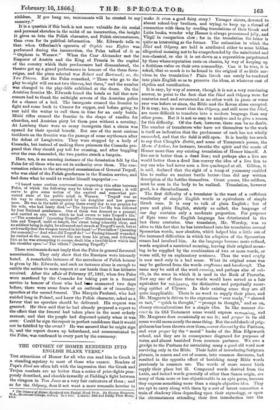 lin.. EDWARDS had the honour of being Times' correspondent in Poland during the last insurrection, and the still greater honour. of -being turned out of Poland by the Russians. Yet neither of these things has in the least influenced his judgment. Though he was a Times'-correspondent, he had no- preconceived opinions to which all facts had to be sacrificecl,be retracted any statement which he found was incorrect, and he wrote pleasantly, instead of forcing himself into magniloquence. Though he was sent out of Poland he never adopted that blind. hatred of everything Russian which seems so natural to civilized men, and which, from its very nature, excludes.the clearsighted • condemnation that is deserved, and would be really fatal-to Russia While Mr. Edwards was in Po/and, his endeavours to take a just view of what was going on led the Polish newspapers to regard him as a Russian apologist, and the Russian papers to. describe him as a Polish enthusiast and fanatic. His book will probably meet with the same fate. The Poles will not be pleased with his statements that the institution of.the national police was in itself a condemnation of the revolt, that the peasants were opposed to the insurrection, that the Polish • The Private frisks?, of a Polish isturration. From official and unofficial sources.

army consisted in a great degree of a rabble which vrould be dia.-

owned by Whitechapel, and that the Volhynia was.- utterly. unjustifiable. The Russians will geash their teethiat his justification of the Polish discontent with Russia, at his accounts. of the lawless brutality of the Cossacks and the-more lawless bru- tality of the Russian Government, at his exposure of the deceit by which the Polish peasants were incited'to take part against their country, and of the tyranny exercised on those who were not to be caught by cunning. But to- the- mass of Englishmen, Mr. Edivards' book will be the more. valuable; as 4t"thus steers' between the two extremes. The absence of party- spirit will' prove that -his- judgments are trustworthy. The impartial con- • demnation of the excesses of both sides-will give- the greater weight to the verdict of guilty pronounced against the • Russians, and will 'show that Mr. Edwards' preference- of -the Poles is based on reason and justice. What the Poles haveto complain of, what they attempted to gain by this insurrection, and what any just or upright government would have granted them -already,—this is what Mr. Ediards establishes. And he writes with streh• clear- ness and such grace, that he may expect a hearing even from those who are tired of the wrongs:of Poland and the encroachments of Russia, to whom the first is a wearisome beggar, and the second an incomprehensible phantom.

The case of the Poles against Russia is shortly stated. The Polea hold the same views on the question now as they did in

1814.. They and, in many respects, - barbarous etce d pt rora promising h young wt teheyreu re a after comopulai out nanadthasetiz.thed eYallartlei m in the schools and gymnasiums to bury them in the Masi= army ; which has closed their universities, carried off their libraries, for- bidden the establishment of every -useful and necessary institution, and, in a word, has systematically impeded the development of their country, with a view of rendering it too feeble for resistance." They complain that they are constantly exposed to a humiliation of which no one who has not lived among them. can form an adequate notion. And these feelings. have worked their way so deeply into the heart and marrow of the population that, as Mr. Edwards remarks with bitter irony, the.Russians are blamed, what-- ever they do. " If they plunder -there is an outcry, if they burn there is also an outcry. In the Zamoyski houses they phindered in spite of orders, and in accordance with orders burnt, and still no one was satisfied. So, when they brought the half-dead Frankowski to life, and as soon as he was quite restored hanged him, they were accused of cruelty, while precisely the same charge was brought against them when they hastened to hang Sierakowski instead of leaving him to die of the- incurable wounds he had received on the field of battle." Mi. Edwards never knew a Pole who did not hate the Russian Government. He defies the Russians to show an educated Pole who does not hate them. And we can hardly wonder at this assertion, when we read of the wanton sack of the Zamoyski Palace, of Cossacks whipping their' way through the streets or along the pavements in Warsaw, of police regulations forbidding persons to remain more than ten minutes in cafés or pastrycooks' shops, or of persons arrested for going out by day when they had only a night permit.

At- the same time the wish for insurrection was by no means general. First of all the peasants were in favour of Russia. In some places they were neutral, or-inclined to take the safer side.. In other parts, where they had lately been serfs, they were inclined to oppose a national movement that might restore their ancient fetters. In other parts, again, they had been bribed. or deceived by Russian agents, gulled by extravagant stories; or.armed and furnished with inconceivable licence. But. the educated classes were mostly opposed-to a rising. Scarcely a dozen .men in. Poland were really and ardently desirous of one in January, 1863,1mt un- fortunately they could not decide one way or the. other. The moderate men were afraid of being accused of faCtious.ness if they did not join the movement that .had been started by the party of action. They were on the horns of a dilemma. It was the same with the landed proprietors when the insurgents demanded assist- ance. If they refused it, they were hanged by the-insurgents. If they gave it, they were hanged by the Russians. But in the one case they were hanged-at once, in the other they had-the chances of delay..

Besides, as a Polish proprietor stated to the Russian general

before whom he was summoned, " If they hang me, My son will never find a wife in Poland, nor my daughter a husband, and fifty

years after my death people will turn their backs on my grand- children. If you hang me, monuments will be erected to my memory."

Itis a question if this book is not more valuable• for sooial and personal sketches in the midst of an insurrection, the- insight it gives us into the Polial character, and Polish circumstances, than even for its political. information. Mr. Edwards tells us that when Offenbach's operetta of Orphie aux Rulers was

performed during the insurrection, the Poles talked of .it as " Orpheus in Warsaw." When the Czar Alexander met the Emperor of Austria and the King, of. Prussia in the capital of the country , which their predecessors had dismembered, the theatre got up a grand performance in honour of the three Sove- reigns, and the piece selected was Robert and Bertrand; or, the lwo Thieves. But the Poles remarked, " Those who go. to the play to-night will see not two thieves, but three," and the number was changed in the play-bills exhibited. at the doors. On the Austrian frontier Mr. Edwards found, the hotels so full that new•

comers had to thank the midnight arrests of the Austrian police for a chance of a bed. The insurgents crossed the. frontier to fight and came back to Cracow for supper, and before going, to rest told the waiter to call them• in time for an early battle. Minis rifles crossed the frontier in the shape of candles for

churches, and Austrian piety let them pass without a scrutiny..

At Lemberg there were so many insurgents- that a circus was opened for their special benefit. But one• of the most curious incidents on the frontier was the passage of some scythemen after the defeat of Langiewicz. They were stopped by a body of Cossacks, but instead of making them prisoners the Cossacks pro- posed that they should- pay toll for crossing, and after haggling over the sum demanded, the two parties struck a bargain.

Here, too, is an amusing- instance of the detestation felt by the Poles for all those who are set in authority over them. The con,

versation relates to the attempted assassination of General Trepoff, -who was chief of the Polish gendarmes in the Russian service, and had done what he could to render himself unpopular :—

" I heard some curious conversations respecting this affair between Poles, of which the following may be taken as a specimen ; it will serve to give some notion of the excited and somewhat per- verted state of the public mind in Warsaw. "Frepoff was on his way to church, accompanied by his daughter and her gover- ness. He was in the habit of going there every day to say prayers for

his wife, who had lately died.'—' The hypocrite He was followed by four National gendarmes. One of them was dressed as a peasant, and carried an axe, with which he had sworn to take Trepoff's life.' —'-The scoundrel !' (meaning Trepoff)—' His companions kept between him and Trepoff, until at length, the street being tolerably clear, and no soldiers being in sight, he advanced and struck at Trepoff's neck, but so awkwardlythat the weapon turned in his hand.'—'Poorfellow!' (meaning the assassin)'—' And what did Trepoff do? Feeling himself wounded,' he rushed at the man, wrested the axe from his grasp, and following him as he was attempting to escape, dealt him a terrible blow which laid his shoulder open.'—' The villain " (meaning Trepoff)."

These sentimentsdo not imply that the Poles in general favoured assassination. They only show that the Russians were intensely hated. A remarkable instance of the sacredness of Polish honour is given by Mr. Edwards, and such an instance alone is enough to entitle the nation to more respect at our hands than it has hitherto

received. After .the affair of February 27, 1861, when five Poles were murdered by the Cossacks for taking part in a funeral service in honour of those who had bean massacred two days

before, there were some fears of an outbreak or of incendiary speeches at the second funeral. The Marquis Paulneci, who had resided long in Poland, and knew the Polish character, asked as a favour that no speeches should be delivered. His request was granted. He then said that he had already prepared a report to

the effect that the funeral had taken place in the most orderly manner, and that the people had dispersed quietly when- it was over:. Could he sign the report in perfect confidence that it would not be falsified by the event ? He was assured that he might sign

it;• and the report drawn up beforehand, and communicated to the Poles, was confirmed in every part by the ceremony.