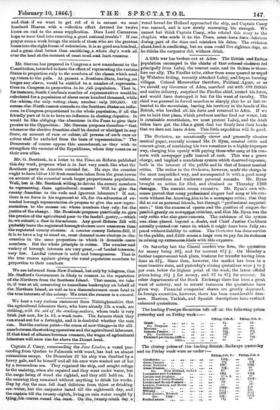 Page 2, 10 February 1866 — The Earl of Carnarvon. is very savage with the Government
Close

The Earl of Carnarvon. is very savage with the Government

for not appointing a day-of general fast and htuniliation for the cattle plague, It shows, he says, that the Government care nothing for the interest that is suffering so deeply. " rcould-un- derstand," he said on Thursday night, " Her Majesty's Govern- ment. decliningto appoint a day der fasting .and humiliation on the gym/ad.:that the cattle plague waselikely to bring us fasting enough," and that the Government atleasehad had enough humi- liation in their abortive- efforts to deal with it. Lord Russell pointed out that we have 'already prayed every Sunday for • some months against the cattle plague, and that. the , Home Secretary thought that enough. We- imagine Lord 'Carnarvon must have some faint notion that I a single prayer • on Sunday against the cattle plague is like a stray weekly shot at an enemy, and that if we want to get . rid of it in earnest we must bombard Heaven with a . collective effort devoted for twelve hours on end to the_ same supplication. Does 'Lord Carnarvon hope to teaze God into removing a great national trouble ? If one prayer once a meek brings the mindaof those.who are the greatest. losers into the.rightirame.of submission, it.i,3 As good as.a hundred,i and a great deal better . than .sactificiisg,a _whole day's work all. over the land. at:the. moment of ,moatneed.:.and least. resource.