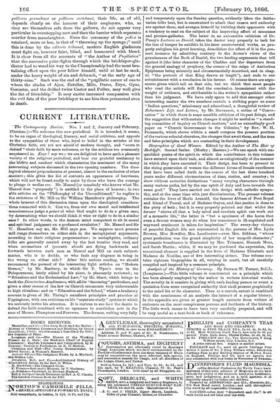 -The Contemporary Review. Nos. 1 and 2, January and February. (Strahan.)-We welcome this new periodical. It is intended, it -seem; to be an organ of theological, literary, and social criticism, and appeals to the sympathies of those who, loyal to belief in -the -articles of the lOitristian faith, are yet not afraidef modern thought, and "scorn to defend "'their faith by mere reticence, =or by the artifices too commonly acquiesced in. -P,age say-we 7 we are delighted to have _arch a pleasant variety of the religious periodical, and bear our grateful testimony to theability and candour which .charaoterize the treatment of -the many Interesting -subjects discussed in the two opening numbers. The theo- logical element.preponderates at.present, almost to the exclusion of other -matters ;.thin gives the list of contents an appearance of heaviness, which will not be found really to exist by those who have the courage to plunge in medias res. Mr. Hansel (or somebody who knows 'what Mr. 'Hansel does "purposely ") is entitled to the place of honour ; in two able articles on the "'Philosophy of the "Unconditioned," he replies-to the strictures of Mr.'Mill on Sir 'William 'Hatnilton's philosophy. The -whole interest of this discussion turns upon the theological considera- 'lions -connected with it. Canwe, from our own moral andintellectual -eoaseionsnese judge a priori of -what God -ought to do in a -'given ease, -by determining what we should think it wise or right to do in a similar 4100 ? In other words, -is the human . mind competent to sit in moral iandspiritual _judgment on a/professed revelation? Mr. Monad and Sir W. _Hamilton say 40, Mr. Mill says .yes. We auppose most persons rein :range-themselves-,on either aide in the metaphysical arguments, according to their _religions prepossessions; in metaphysics, ordinary folks are generally carried away by the last treatise they read,, and when accusations of ignoratio elenchi are flying backwards and forwards between such men as Manse' and Mill on such subject- matter, who is to decide, or who' feels any disgrace in being in the wrong on either side ? After 'this serious reading, we should 'recommend 'the perusal-of -the interesting light articles on "Modern Greece," by Mx.. Banbury, -in which- Sir T. Wyse's tour in the "-Peloponnesus, lately edited 'by -his niece,-is pleasantly reviewed ; on '"Ritualism-and the Ecclesiastical Law," by Mr. Shaw, which brings, to book -the Directoriunz Anglican:on, with all•itn "'incensing" .particulars and -gives, a clear résumé of thelaw on Church,ornamenta very unfavourable to high ritualism; and on " Fklucationand the-School," where a laudatory account is given of Mr. Thring's excellent principles and, practice. at Uppin,gham, with one.criticism en his "separate-study".system to which we seriously invite his attention. It is curious to see how the desire to defend the faith combined with an openness to conviction acts in the case of Messrs. Plumptree and Perowne. The former, writing very fully and temperately upon the Sunday question, evidently. likes. the Sabha- taxi= folks best, but is constrained:to admit that reason and authority are against them, and avenges himself by twitting their opponents with a tendency to cant on the subject of the improving effect of museums and picture-galleries. The latter in an exhaustive criticism of Dr. Pusey's Lectures on Daniel, takes the doctor very properly to task for loss of temper he exhibits in hislater controversial works, as pro- perly eulogizes his great learning, demolishes.the effect-of it in the pre, sent. instance by admitting contrary to the doctor's views of the, .genuineness of the Book of Daniel, the two leading-arguments-that tell _against it (the later character of the "Chaldee and 'the departure from the general analogy of prophecy, the events-of the -reign of Antiochua Epiplranes being minutely and circumstantially described, and ,in chap. -xi. "the portrait -of that King drawn at length"), and- ends to our astonishment with a conclusion in bin favour. Of coarse there are argu- ments- given which tell on that side, but we .think that most people who read the. article will find the conclusion inconsistent with the- weight of evidence, and attributable to- the writer's sympathies rather than his judgment. We have only space to- add that amongst other interesting matter the two numbers contain a striking paper on some "Indian questions," missionary and educational, a thoughtful review of Robertson's Life and Letters, by Mr. Stevenson, a notice of "Convo- cation " in which there is some, sensible criticism of its past doing; and the suggestion that withcertain changes it might be useful as " a stand- ing committee of inquiry on Church matters,". and an-exceedingly good paper on " Church' Government -in the Colonies," by Rev. W." 'H. Fremantle, -which shows within a -small compass the present position 'of the various colonial churches, the changes that await them, and the true- and false,principles which are contending in-their development.