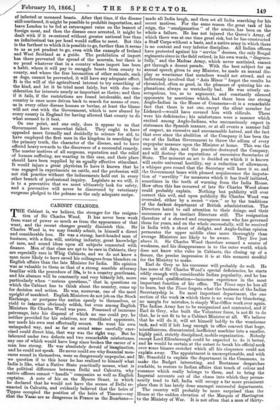 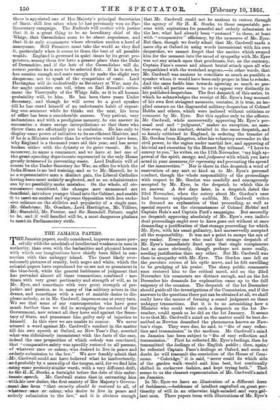 THE Cabinet is, we believe, the stronger for the resigna- tion of Sir Charles Wood. It has never been weak from want of power so much as from the appearance of that want, and the recent changes greatly diminish this. Sir 'Charles Wood is, we may frankly admit, in himself a direct -and considerable loss. He was a strong, hard-headed man of business, with a firm will, untiring industry, great knowledge -of- men, and sound ideas upon all subjects connected with finance. Men of that class are apt to be rare in Cabinets, they are especially rare in Whig Cabinets, and we do not know a man more likely to have saved his colleagues from blunders on English affairs than the late Minister for India. His opinion was as valuable to them as that of a strong sensible attorney familiar with the procedure of Ill% is to a country gentleman, and his absence will be constantly and very bitterly felt, more particularly when " serious questions," that is, questions on which the Cabinet has to think about the country, come up' for decision and action. He was, moreover, one of the most upright of mankind. English Ministers do not job on the Stock Exchange, or postpone the nation openly to themselves, or -yield to interests obviously selfish, but even among English Ministers Sir Charles Wood was pure. Possessed of immense -patronage, into his disposal of which no one could pry, he neither provided for his relatives, nor Conciliated opponents, -nor made his own seat effectually secure. He went his own unimpeded way, and as far as sound sense carefully exer- cised could direct him, that way was the right way. But he laboured under two defects and two remarkable misfortunes, any one of which would have long since broken the career of a -man less strong. He 'was absolutely devoid of imagination, and he could not speak. He never could see why financial mea- limns sound in themselves, were so dangerously unpopular, and we question if to this hour he has realized to himself what India is like, what a Native State practically means, what is the political difference between Delhi and Calcutta, why -native officers cannot " handle " companies as well as English -captains. A note of his on the Mysore Grant, in which he declared that he would not have the scenes of Delhi re- enacted in Calcutta, and evidently believed that the heirs of Tippoo occupied the position of the heirs of Timour—say that the UM are as dangerous in France as the Bourbons— made all India laugh, and then set all India searching for his secret motives. For the same reason the great task of his reign, the "amalgamation " of the armies, has been on the whole a failure. He has not injured the Queen's Army, of which there was at one time great risk, but he has constructed a Staff Corps without a basis, and a native army in which there is no content and very inferior discipline. All Indian officers have protested against his " service " decrees, the only Bengal regiments since in the field retired, in his own words, " disgrace- fully," and the Madras Army, which never mutinied, cannot get through a decent parade. With the best subject for an annual speech given to any Minister, he made an annual dis- play so wearisome that members would not attend, and so ludicrously involved that "Asia Minor " forgot the results he chronicled, often so good, in the pleasure of quizzing his ex- planations, always so wretchedly bad. He was utterly un- scrupulous, too, as to argument, and constantly silenced opponents by assertions which, had there been one strong Anglo-Indian in the House of Commons—it is a remarkable fact that there is not one, except the silent member for Liskeard—would have covered him with ridicule. These were his deficiencies ; his misfortunes were a manner which excited among Anglo-Indians, who unconsciously expect in statesmen the Spanish manner, or at all events a manner full of respect, an excessive and unreasonable hatred, and the fact that ever since the abolition of the Company it has been the cue of the Indian Government to throw the odium of every unpopular measure upon the Minister at home. This was the case in old days, and the practice destroyed the Company, and will destroy the reputations of successive Secretaries of State. The moment an act is decided on which it is known will excite universal hostility, say a reduction of allowances, a whisper goes round that the Secretary will have it so, and the Government bears with pleased acquiescence the imputa- tion of "servility " for measures which it has itself initiated, sometimes in the teeth of warning from the India House. How often this has occurred of late Sir Charles Wood alone could probably explain. Nothing but publicity will ever correct this evil, and upon publicity Sir Charles Wood was overruled, either by a secret " view," or by the traditions of the darkest department of British administration. The Directors hated to call attention to their doings, and their successors are in instinct Directors still. The resignation therefore of a shrewd and courageous man who has governed them for years, and on the whole successfully, will be received in India with a shout of delight, and Anglo-Indian opinion permeates the upper middle class more thoroughly than average Ministers are likely to be aware. They live just above it. Sir Charles Wood therefore seemed a source of weakness, and his disappearance is to the outer world, which does not know who rules in Cabinets, the closing up of a fissure, the precise impression it is at this moment needful for the Ministry to make.

Earl de Grey as his successor will probably do well. He has none of Sir Charles Wood's special deficiencies, he starts oddly enough with considerable Indian popularity, and he has one special qualification—immense experience in the most important function of his office. The Times says he has all to learn, but the Times forgets what the business of the Indian Secretaryship is. Its most important department, the one section of the work in which there is no room for blundering, no margin for mistakes, is simply War-Office work over again. The Indian Army has to be reorganized and contented, and if Earl de Grey, who built the Volunteer force, is not fit to do that, he is not fit to be a Cabinet Minister at all. We believe that he will do it, will set himself boldly to the wearisome task, and will if left long enough in office convert that huge, miscellaneous, discontented, inefficient machine into a smaller, highly paid, strictly disciplined, mobile organization. • Nobody except Lord Ellenborough could be expected to do it better, and he would be certain at the outset to break his official neck over some bizarre crotchet which all his eloquence could not explain away. The appointment is unexceptionable, and with Mr. Stansfeld to explain the department in the Commons, to make the Budget interesting, and Bootanese despatches readable, to restore to Indian affairs that touch of colour and romance which really belongs to them, and to bring the Imperial accounts out of the chaos into which they perma- nently tend to fall, India will occupy a far more prominent place'than it has lately done amongst successful departments.

The country will probably be more surprised than the House at the sudden elevation of the Marquis of Hartington to the Ministry of War. • It is not often that a man of thirty- three is appointed_ one of Her Majesty's principal Secretaries , of State, still. less often when he has previously won no Par- liamentary campaign. The Radicals will mutter with justice that it .is .a :great thing to be an hereditary chief of the Whigs,..that Garendishes seem to be , above . experience, , and that. itis only commoners whose elevation excites a howl of :annoyance. Still Premiers must take the world as they find -it, -particularly- when it seems to them the best of all possible

tworbis. England is governed in quiet .times by its great, pro- -prietors,, among them fevr_have a greater place than the Duke of. Devonshire, and :if the , heir of the Cavendishes will do, eceteris paribus he issure to be selected first. If he isnot, he _has eonsins enough and seats-enough to make -the slight very dangerous, not to speak of -the sympathies.-of caste. . Lord Hartington will do undoubtedly as. Secretary at 'War, may do, for anght outsiders can tell, when on Earl Russell's retire- ment the Viceroyalty of the Whigs falls, - as it in. all human 'probability :will, to ..him. He has been three years Under :Secretary,, and though he . will never be a good speaker till he has cured himself of an. unfortunate habit of repeat- ing :ono,sentenee while he ...thinks out the next, his term of ,offiee has been a considerable success. 'Very patient, very industrious, and with a prodigious memory, he can answer in succession:a dozen savage interpellations so that those who 'throw them are effectually put to confusion. Ile .has only-to display-some power of initiative to. be =efficient-Minister, and if he is. n.Minister earlier than he otherwise would have been, why _England is a _thousand years old this year,. and has never broken -either with the dynasty or its great vassals. He is, anoreoverrinIname a. commoner, and we have . at .last one of the great spending departments representedin the only:House greatly interestedin preventing-waste. Lord Dufferin will of course: bathe Under Secretary for War, an office for which the India:oklouse, ismo bad training,:and . as to Mro:Monsell, he is as a Tepresentative man a distinct gain, the Liberal Catholics

.-havingheewniast unfairlyneglected,:and as an administrator can brne.-poisibilitymake mistakes. .On the whole, all cir- cumstances considered, the changes know :announced are hennfizial, introduce younger blood into the Cabinet, and enable it -to nseetan excited and- vigorous Opposition withless exclu- , sive relianceon the abilities and popularity of a single man -ifIlatistone, Mr. Gosebon,I.Lord Hartington, Mr. Villiers, Mr.:"Stansfeld, Mr. Forster, and. Sir Roundell. Palmer, ought to be, and if well handled will-be, a most _dangerous phalanx to ..meet.in. Parliamentary strife.