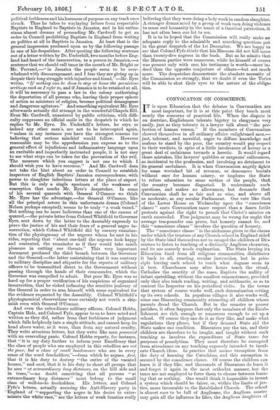 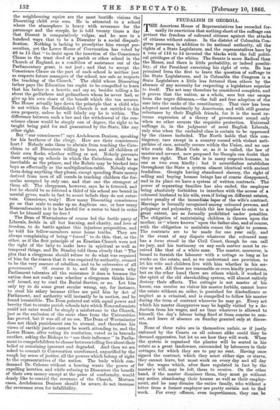 TT is upon Education that the debates in Convocation are I most important, for it is at this point they touch most nearly the concerns of practical life. When the dispute is on doctrine, Englishmen tolerate bigotry in clergymen very easily, just as they tolerate in a lawyer talk about " the per- fection.of human reason." If the members of Convocation showed themselves in all ordinary affairs enlightened-men,— just, tolerant, and merciful, eager to diffuse _knowledge and zealous to stand by the poor, the country would pay respect to their verdicts, in spite of a little intolerance of heresy or a great deal of unfairness towards • a heretic. It would regard those mistakes, like lawyers' quibbles or surgeons' callousness, as incidental to the profession, and involving no detriment to its: general usefulness. It is when Convocation angrily fights for some wretched bit of revenue, or denounces burials without care for human misery, or implores the State to refuse education to some . section of the people, that the country becomes disgusted. It understands such questions, and makes no allowances, but demands that Convocation shall be as fair and as wise, and above all as moderate, as •any secular Parliament. One vote like that of the Lower House on Wednesday upon the " conscience clause " costs Convocation more respect than a dozen futile protests against the right to preach that Christ's mission on earth succeeded. Free judgment may be wrong for aught the average ten-pounder can prove, but honesty cannot be, and this " conscience clause " involves the question of honesty.

The "conscience clause " is the nickname given to the clause under which the trustees of any Church school in England aided by the State bind themselves not to compel the children of Dice centers to listen to teaching of a distinctly Anglican character, and its use scarcely needs explanation. The State levying its Education fund from all religious communities, distributes it back to all, exacting secular instruction, but in prin- ciple leaving each school to teach what dogmas seem to it best. Churchmen may after hours teach the ritual, Catholics the sanctity of the ma-SS, Baptists the nullity of infant sprinkling, without the smallest remonstrance, provided only they also teach reading, writing, and arithmetic, so as to content the Inspector on his periodical visits. In the towns that system of course works well, each denomination setting up its own schools. In populous villages it also works well, some one Dissenting community attracting all children whose parents dread the Church. But in the remoter or poorer parishes, it often happens that only the members of the Estab- lishment are rich enough or numerous enough to set up a school. Of course they can do it as they like, and make what regulations they please, but if they demand State aid the State makes one condition. Dissenters pay the tax, and their children are therefore to be taught, and taught without such teaching as involves the expenditure of State taxes for purposes of proselytism. They must therefore be exempted from attendance on any teaching expressly intended to incul- cate Church ideas. In practice that means exemption from the duty of learning the Catechism, and this exemption is secured by the conscience clause. Of course the children can learn it if they like, and thousands of Dissenters do learn it and forget it again in the most orthodox manner, but the taxes are not employed to force them to choose between learn- ing that or nothing. One would think it impossible to invent a system which should be fairer, or, within the limits of jus- tice, more favourable to the Established Church. The school is almost sure to be full of Anglicans, the Anglican master may gain all the influence he likes, the Anglican daughters of the neighbouring squire are the most beatific visions the Dissenting child ever sees. He is attracted to a school where the atmosphere is heavy with reverence for the parsonage and the steeple, he is told twenty times a day that Dissent is comparatively vulgar, and he sees in a hundred ways that to be a Dissenter is a social disquali- fication. Nothing is lacking to proselytize him except per- secution, yet the Lower House of Convocation has voted by 46 to 15 that " to insist upon the insertion of the Conscience Clause in the trust deed of a parish or other school in the Church of England, as a condition of assistance out of the Parliamentary grant, is not just ; and that to accept the Conscience Clause on the part of such school is neither just as respects future managers of the school, nor safe as respects the teaching of the Church." The child whose Dissenting father pays the Education tax ought to be compelled to learn that his father is a heretic, and say so, besides telling a lie about the godfathers and godmothers whom he never had, or give up his own share of the benefit which the tax secures. The House actually lays down the principle that a child who is not within the Established Church is not entitled to his own property, unless he will falsely say he is within. The difference between such a law and the withdrawal of the con- science clause would be simply one of degree, the right to be taught being paid for and guaranteed by the State, like any other right.

But " our consciences !" says Archdeacon Denison, speaking for his brethren of the clergy. How are their consciences hurt Nobody asks them to abstain from teaching the Cate- chism to all Dissenters willing to hear, and all children of their own flocks, whether willing or not. Nobody prevents their setting up schools in which the Catechism shall be as inevitable as the primer, and the Rubric may be birched into boys as effectually as the multiplication-table. Nobody stops them doing anything they please, except spending State money derived from men of all creeds in teaching children the for- mulas accepted by only one, and that one the strongest of them all. The clergyman, however, says he is fettered, and lest he should be so fettered a third of his school are bound in mental gyves, made in fact 'to assert beliefs they do not enter- tain. Conscience, truly! How many Dissenting consciences go on that scale to make up an Anglican one, or how many Nonconformists is it to be lawful for a rector to bind in order that he himself may be free ?

The Dean of Westminster of course led the feeble party of Liberals, feeble in all but learning, and charity, and love of freedom, to do battle against this injurious proposition, and he told his fellow-members some home truths. They are always complaining of being "forced" to do this, that, or the other, as if the first principle of an Erastian Church were not the right of the laity to make laws in spiritual as well as temporal things, and Dr. Stanley told them clearly that " The plea that a clergyman should refuse to do what was required of him for the reason that it was required by authority, seemed to be the very essence of rebellion, and to be subversive of all government." Of course it is, and the only reason why Parliament tolerates all the resistance it does is because the nation does not really care whether a clergyman thinks him- self bound, say to read the Burial Service, or no. Let him only try to do some great secular wrong, say, for instance, to steal his salary because tithes are paid him by Act of Parliament, and authority will instantly be in motion, and be found irresistible. The Dean pointed out with equal power and brevity that to create parish schools into which Nonconformists could not enter would be simply a misfortune to the Church, just as the exclusion of the same class from the Universities has proved, but it was all of no use. The Dean of Westminster does not think punishment can be eternal, and therefore his views of earthly justice cannot be worth attending to, and the Loiver House, after voting its resolution, voted as in bravado another, asking the Bishops to " use their influence " in Parlia- ment to compel children to choose between telling lies about their belief or remaining ignorant and degraded. And then we are asked to commit to Convocation unreformed, unpurified by the rough lay sense of justice, all the powers which belong of right to the representatives of the nation. The body which con- demned Dr. Colenso without a hearing wants the power of expelling heretics, and while refusing to Dissenters the benefit of their own money except at the price of conformity, would dearly like to control the revenues of the Church. Mortara cases, Archdeacon Denison should be aware, do not increase the reverence even for infallibility.