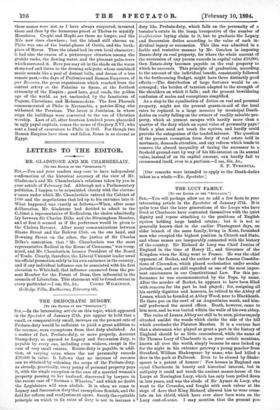 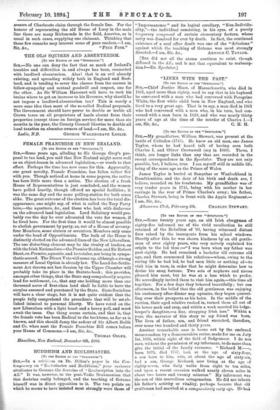 Si,—You will perhaps allow me to add a few facts to your interesting article in the Spectator of January 27th. It is quite true that the later generations of the Lucys who have lived at Charlecote have contented themselves with the quiet dignity and repose attaching to the positions of English squires holding large landed estates ; but it is not so generally known that in the earlier Plantagenet days, an elder branch of the same family, living in Kent, furnished men who occupied the highest position in Church and State, and whose names are inseparably connected with the history of the country. Sir Richard de Lucy was Chief Justice of England in the time of Henry II., and Governor of the Kingdom when the King went to France. He was the chief opponent of Becket, and the author of the famous Constitu- tions of Clarendon, which placed ecclesiastics under secular jurisdiction, and are still regarded as one of the most impor. taut enactments in our Constitutional Law. For this per- formance he was excommunicated by the Pope, by name. After the murder of Becket, he appears to have been filled with remorse for the part he had played ; for, resigning all his earthly dignities and honours, he retired to the Abbey of Lesnes, which he founded at Abbey Wood, near to Blackheath. He there put on the cowl of an Augustinian monk, and him- self performed the sacred offices. Death, however, came to him soon, and he was buried within the walls of his own abbey.

The ruins of Lesnes Abbey are still to be seen, picturesquely situated amidst the woods which clothe the side of the hill which overlooks the Plaistow Marshes. It is a curious fact that a statesman who played so great a part in the history of England should be so little remembered, while the name of Sir Thomas Lucy of Charlecote is, as your article mentions, known all over the world, simply because he once locked up for the night in his entrance gateway a young poacher from Stratford, William Shakespeare by name, who had killed a deer in the park at Falbrook. Even to be abused by Shake- speare is a patent of honour ! Few houses in England can equal Charlecote in beauty and historical interest, but in antiquity it could not touch the ancient manor-house of the Lucys at Newington Lucy, which has only been pulled down in late years, and was the abode of Sir Aymer de Lucy, who went to the Crusades, and fought with such valour at the siege of Acre that King Richard allowed him to wear cross- lets on his shield, which have ever since been worn on the Lucy coat-of-arms. I may mention that the present pos- senors of Charlecote claim through the female line. For the honour of representing the old House of Lucy in the male line there are many Richmonds in the field, America, as is usual in such cases, supplying one claimant. Thinking that these few remarks may interest some of your readers,—I am,