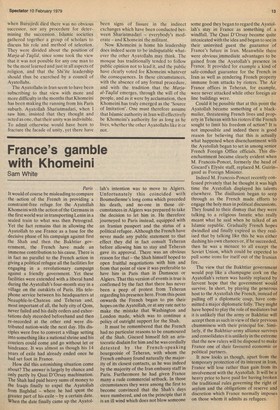 Paris It would of course be misleading to compare the ,action of the French in providing a constraint-free refuge for the Ayatollah Khomeini with the action of the Germans in the first world war in transporting Lenin in a sealed train to what was then Petrograd. Yet the fact remains that in allowing the Ayatollah to use France as a base for the decisive phase of his campaign against first the Shah and then the Bakhtiar government, the French have made an immense contribution to his cause. There is in fact no parallel to the French action in giving a political refugee all the facilities for engaging in a revolutionary campaign against a friendly government. Yet these facilities were extended with a liberal hand during the Ayatollah's four-month stay in a village on the outskirts of Paris. His telephone service between his headquarters at Neauphle-le-Chateau and Teheran and, most important of all, the holy city of Qom, never failed and his daily orders and exhortations duly recorded beforehand and then re-recorded at the other end were distributed nation-wide the next day. His disciples were free to convert a village setting into something like a national shrine and his couriers could come and go without let or hindrance. It was almost as though his 14 years of exile had already ended once he had set foot in France.

How did this astonishing situation come about? The answer is largely by chance and only partly by Quai D'Orsay machination. The Shah had paid heavy sums of money to the Iraqis finally to expel the Ayatollah from Baghdad — where he had spent the greater part of his exile — by a certain date. When the date finally came up the Ayatol lah's intention was to move to Algiers. Unfortunately this coincided with Boumedienne's long coma which preceded his death, and no-one in those circumstances in Algiers was prepared to take the decision to let him in. He therefore journeyed to Paris instead, equipped with an Iranian passport and the status of a political refugee. Although the French have never made any public statement to that effect they did in fact consult Teheran before allowing him to stay and Teheran gave its approval. There was an obvious reason for that — the Shah himself hoped to open fruitful negotiations with him and from that point of view it was preferable to have him in Paris than in Damascus or Algiers. That this version of events is true is confirmed by the fact that there has never been a peep of protest from Teheran regarding his presence here. From this point onwards the French began to pin their hopes on the Ayatollah, or at any rate not to make the mistake that Washington and London made, which was to continue a policy of outright support for the Shah. It must be remembered that the French had no particular reasons to be enamoured of the Shah. Giscard himself felt an aristocratic disdain for him and he was cordially detested by the French-speaking bourgeoisie of Teheran, with whom the French embassy found naturally the majority of its closest contacts, as he was indeed by the majority of the Iran embassy staff in Paris. Furthermore he had given France many a rude commercial setback. In those circumstances they were among the first to become convinced that the Shah's days were numbered, and on the principle that it is an ill wind which does not blow someone some good they began to regard the Ayatollah's stay in France as something of a windfall. The Quai D'Orsay became quite intoxicated with the idea and began to see in their uninvited guest the guarantor of France's future in Iran. Meanwhile there were obvious _immediate advantages to be gained from the Ayatollah's presence in France. It provided for example a kind of safe-conduct guarantee for the French in Iran as well as rendering French property immune from attacks by rioters. The Air France offices in Teheran, for example, were never attacked while other foreign air line buildings were.

Could it be possible that at this point the Ayatollah became something of a blackmailer, threatening French lives and property in Teheran with his rioters if the French sought to limit his freedom of action? It is not impossible and indeed there is good reason for believing that this is actually what happened when disenchantment with the Ayatollah began to set in among senior French Foreign Office officials. This disenchantment became clearly evident when M. Francois-Poncet, formerly the head of Giscard's Elysee staff, replaced M. Guiringaud as Foreign Minister.

Indeed M. Francois-Poncet recently confessed privately that he thought it was high time the Ayatollah displayed his talents elsewhere. The disillusion began to seep through as the French made efforts to engage the holy man in political discussions. They found to their dismay that they were talking to a religious fanatic who really meant what he said when he talked of an Islamic republic. Gradually French hopes dwindled and finally expired as they realised that by talking like this he was either dashing his own chances or, if he succeeded, then he was a menace to all except the Soviet Union, which could be expected to pull some irons for itself out of the Iranian fire.

The view that the Bakhtiar government would pop like a champagne cork on the Ayatollah's return was hastily replaced by fervent hope that the government would survive. In short, by playing the generous host to the Ayatollah the French, instead of pulling off a diplomatic coup, have committed a major diplomatic folly. They might have hoped to play the role of mediators but it is unlikely that the army or Bakhtiar will accept them as such in view of their previous chumminess with their principal foe. Similarly, if the Bakhtiar-army alliance survives and consolidates it is unlikely in the extreme that the new rulers will be disposed to make France one of their favoured economic or political partners.

It now looks as though, apart from the temporary protection of its interest in Iran, France will lose rather than gain from its involvement with the Ayatollah. It will be a heavy price to have paid for having broken the traditional rules governing the right of asylum and the obligations of reserve and discretion which France normally imposes on those whom it admits as refugees.