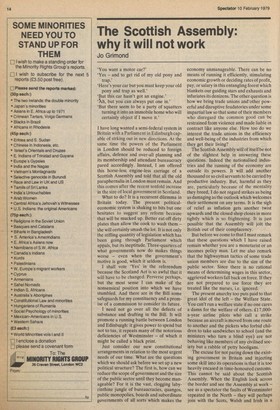 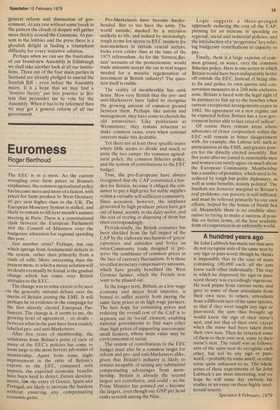 The Scottish Assembly: why it will not work

'Here's your car but you must keep your old pony and trap as well.'

'But this car hasn't got an engine.' Ah, but you can always put one in.' 'But there seem to be a party of squatters turning it into an immobile home who will certainly object if I move it.'

I have long wanted a semi-federal system in Britain with a Parliament in Edinburgh capable of strking out in new directions. At the same time the powers of the Parliament in London should be reduced to foreign affairs, defence and over-all planning and its membership and attendant bureaucracy pared accordingly. Instead, I am offered this horse-less, engine-less carriage of a Scottish Assembly and told that all the old paraphernalia in London must remain. And this comes after the recent tenfold increase in the size of local government in Scotland.

What to do? It is a recurrent dilemma in Britain today. The present politicaleconomic system is shaking to bits but one hesitates to suggest any reform because that will be mucked up. Better eat off dirty plates than allow the cook to wash them — she will certainly smash the lot. It is not only the stifling quantity of legislation which has been going through Parliament which appals, but its ineptitude. Three-quarters of what governments now do makes things worse — even when the government's motive is good, which it seldom is.

I shall vote 'Yes' in the referendum because the Scotland Act is so awful that it will have to be changed. Perverse perhaps, but the most sense I can make of the nonsensical position into which we have stumbled. And there are in the Bill some safeguards for my constituency and a promise of a commission to consider its future.

I need not go over all the defects of substance and drafting in the Bill. It will promote a running battle between London and Edinburgh: it gives power to spend but not to tax, it repeats many of the notorious deficiencies of Westminster — of which it might be called a black print.

Just consider our new constitutional arrangements in relation to the most urgent needs of our time. What are the questions which we should ask before we set up a new political structure? The first is, how can we reduce the scope of government and the size of the public sector until they become manageable? For it is the vast, clogging labyrinthine jungle of bureaucracies, quangos, public monopolies, boards and subordinate governments of all sorts which makes the economy unmanageable. There can be no means of running it efficiently, stimulating economic growth or deciding rates of profit, pay, or salary in this entangling forest which blankets our guiding stars and exhausts and infuriates its denizens. The other question is how we bring trade unions and'other powerful and disruptive feudatories under some impartial law so that some of their members who disregard the common good can be restrained from violence and made liable in contract like anyone else. How too do we interest the trade unions in the efficiency and well-being of the industries from which they get their living?

The Scottish Assembly will of itself be not of the slightest help in answering these questions. Indeed the nationalised industries and the running of the economy are outside its powers. It will add another thousand or so civil servants to be carried by productive industry. But, harmful as they are, particularly because of the mentality they breed, I do not regard strikes as being as damaging as the outlook which welcomes their settlement on any terms. It is the sigh of relief as inflation gets another twist upwards and the closed shop closes in more tightly which is so frightening. It is just possible that the Assembly will jolt the British out of their complacency.

But before we come to that! must remark that these questions which I have raised remain whether you are a monetarist or an incomes policy man. Let me also remark that the highwayman tactics of some trade union members are due to the size of the public sector. Since there is no rational means of determining wages in this sector, aggrieved workers fall back on force. If they are not prepared to use force they are treated like the nurses, i.e. ignored.

The present anarchy too puts paid to that great idol of the left — the Welfare State. You can't run a welfare state if no one cares a damn for the welfare of others. £17,000a-year airline pilots who call a strike because an aircraft is moved from one route to another and the pickets who forbid children to take sandwiches to school (and the ministers who turn a blind eye) are not behaving like members of any civilised society but a rabble of petty hooligans.

The excuse for not paring down the existing government in Britain and injecting some skill into its operations is that it is too heavily encased in time-honoured customs. This cannot be said about the Scottish Assembly. When the English look across the border and see the Assembly at work — see as a spectator the faults of Westminster repeated in the North — they will perhaps join with the Scots, Welsh and Irish in a general reform and diminution of government. At any rate without some break in the pattern the clouds of despair will gather more thickly around the Commons. At present in the lobbies and the press there is a ghoulish delight in finding a triumphant difficulty for every tentative solution.

Perhaps when we can see the frustration of our brand-new Assembly in Edinburgh we shall take another look at all our institutions. Three out of the four main parties in Scotland are already pledged to amend the Scottish Bill — even before the Assembly meets. It is a hope that we may find a 'domino theory' put into practice in Britain that persuades me to vote for the Assembly. When it has to be reformed then we may get a general reform of all our government.