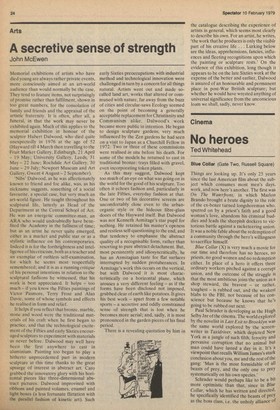 A secretive sense of strength

Memorial exhibitions of artists who have died young are always rather private events, more consciously aimed at an art-world audience than would normally be the case. They tend to feature items, not surprisingly of promise rather than fulfilment, shown in too great numbers, for the consolation of family and friends and the appraisal of the artistic fraternity. It is often, after all, a funeral, in that the work may never be exhibited again. Much of this applies to the memorial exhibition in honour of the sculptor Hubert Dalwood, who died quite unexpectedly in 1976 at the age of 52 (Hayward till 4 March then travelling to the Fruit Market Gallery, Edinburgh, 21 April — 19 May; University Gallery, Leeds, 31 May — 22 June; Rochdale Art Gallery, 30 June — 29 July; Newport Museum and Art Gallery, Gwent 4 August —2 September).

'Nibs' Dalwood, as he was affectionately known to friend and foe alike, was, as his nickname suggests, something of a social favourite, a special case, but very much an art-world figure. He taught throughout his sculptural life, latterly as Head of the Department at the Central School of Art. He was an energetic committee-man, an ARA who would undoubtedly have benefited the Academy in the fullness of time; but as an artist he never quite emerged, either as a market and public star or as a stylistic influence on his contemporaries. Indeed it is for the forthrightness and intelligence of his criticism, both as a teacher and an exemplar of ruthless self-examination, for which he seems most respectfully remembered; and it is as a running critique of his personal intentions in relation to the sculptural fashions he witnessed. that his work is best appreciated. It helps — too much — if you know the Fifties paintings of Victor Pasmore, Terry Frost and Alan Davie, some of whose symbols and effects he realised in form and relief.

It helps if you reflect that bronze, marble, stone and wood were the traditional materials of his craft when he first began to practice, and that the technological excitement of the Fifties and early Sixties encouraged sculptors to experiment with materials as never before. Dalwood may well have been the first anywhere to cast in aluminium. Painting too began to play a hitherto unprecedented part in modern sculpture at this time thanks to the great upsurge of interest in abstract art. Caro grabbed the innovatory glory with his horizontal pieces like three-dimensional abstract pictures. Dalwood improvised with ribbons and painted volumes, enamel and light boxes (a less fortunate flirtation with the parallel fashion of kinetic art). Such early Sixties preoccupations with industrial method and technological innovation were challenged in turn by a concern for all things natural. Artists went out and made socalled land art, works that altered or communed with nature, far away from the buzz of cities and circular-saws Ecology seemed on the point of becoming a generally acceptable replacement for Christianity and Communism alike. Dalwood's work became more public in intention. He began to design sculpture gardens, very much influenced by the Zen gardens he had seen on a visit to Japan as a Churchill Fellow in 1972. Two or three of these commissions were realised in situ before his death. For some of the models he returned to cast in traditional bronze: trays filled with gravel, even incorporating token plants.

As this may suggest, Dalwood kept too much of an eye on what was going on in the world for the good of his sculpture. Too often it echoes fashion and, particularly in the late Fifties, everyday fashion at that. One or two of his decorative screens are uncomfortably close even to the urbanorganic style or the hideous fibre-glass doors of the Hayward itself. But Dalwood was not Kenneth Armitage's star pupil for nothing. He retained his master's openess and restless self-questioning to the end, and that tendency to emphasise the abstract quality of a recognisable form, rather than resorting to pure abstract detachment. But, most persistently and idiosyncratically, he has an Armitagian taste for flat surfaces interrupted by sudden protuberances. In Armitage's work this occurs on the vertical, but with Dalwood it is most characteristically on a horizontal plane, which arouses a very different feeling — as if the forms have been disclosed not imposed, grubbed clear of earth like potatoes. It gives his best work — apart from a few notable sports — a secretive and oddly constrained sense of strength that is lost when he becomes more aerial; and, sadly, it is most pronounced in the garden pieces of his final period.

There is a revealing quotation by him in the catalogue describing the experience of artists in general, which seems most clearly to describe his own. For an artist, he writes, 'the work that he produces is only the visible part of his creative life . . . Lurking below are the ideas, apprehensions, fancies, influences and fleeting recognitions upon which the painting or sculpture rests.' On the evidence of this exhibition, long though it appears to be on the late Sixties work at the expense of the better and earlier, Dalwood is assured of an honourable and permanent place in post-War British sculpture; but whether he would have wrested anything of universal significance from the unconscious loam we shall, sadly, never know.