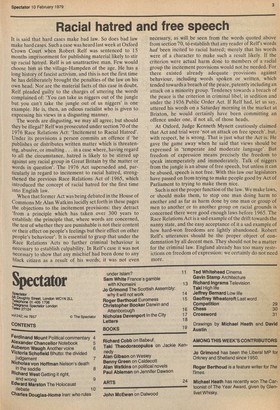 It is said that hard cases make bad law. So does bad law make hard cases. Such a case was heard last week at Oxford Crown Court when Robert Reif was sentenced to 15 months imprisonment for publishing material likely to stir up racial hatred. Reif is an unattractive man. Few would choose him as the village-Hampden of the age. He has a long history of fascist activism, and this is not the first time he has deliberately brought the penalties of the law on his own head. Nor are the material facts of this case in doubt. Reif pleaded guilty to the charges of uttering the words complained of: 'You can take us niggers out of the jungle but you can't take the jungle out of us niggers' is one example. He is, then, an odious racialist who is given to expressing his views in a disgusting manner.

The words are disgusting, we may all agree; but should they be illegal? Relf was prosecuted under section 70 of the 1976 Race Relations Act: 'Incitement to Racial Hatred'. Under its provisions a person commits an offence if 'he publishes or distributes written matter which is threatening, abusive, or insulting. . . in a case where, having regard to all the circumstance, hatred is likely to be stirred up against any racial group in Great Britain by the matter or words in question'. The 1976 Act superseded and, particularly in regard to incitement to racial hatred, strengthened the previous Race Relations Act of 1965, which introduced the concept of racial hatred for the first time into English law.

When that former Act was being debated in the House of Commons Mr Alan Watkins lucidly set forth in these pages the objections to the incitement provisions: they detract 'from a principle which has taken over 300 years to establish: the principle that, where words are concerned, the test of whether they are punishable is not their content or their effect on people's feelings but their effect on other people's behaviour'. It is essential to grasp that under the Race Relations Acts no further criminal behaviour is necessary to establish culpability. In Reif's case it was not necessary to show that any mischief had been done to any black citizen as a result of his words; it was not even necessary, as will be seen from the words quoted above from section 70, to establish that any reader of Relfs words had been incited to racial hatred; merely that his words were of a character to make such a result likely. If the criterion were actual harm done to members of a racial group the incitement provisions would not be needed. For there existed already adequate provisions against behaviour, including words spoken or written, which tended towards a breach of the peace, patently including an attack on a minority group. Tendency towards a breach of the peace is the criterion in criminal libel, in sedition and under the 1936 Public Order Act. If Relf had, let us say, uttered his words on a Saturday morning in the market at Brixton, he would certainly have been committing an offence under one, if not all, of those heads.

At Oxford, Judge Kenneth Mynett cautiously claimed that Act and trial were 'not an attack on free speech', but, with respect, he is wrong. That is just what the Act is. He gave the game away when he said that views should be expressed in 'temperate and moderate language'. But freedom of expression means precisely the freedom to speak intemperately and immoderately. Talk of niggers from the jungle is an abuse of free speech, but unless it can be abused, speech is not free. With this law our legislators have passed on from trying to make people good by Act of Parliament to trying to make them nice.

Such is not the proper function of the law. We make laws, or should make them, to stop one man doing harm to another and as far as harm done by one man or group of men to another or to another group on racial grounds is concerned there were good enough laws before 1965. The Race Relations Act is a sad example of the drift towards the nanny state, and the easy acceptance of it a sad example of how hard-won freedoms are lightly abandoned. Robert Reif' s utterances should be the proper object of condemnation by all decent men. They should not be a matter for the criminal law. England already has too many restrictions on freedom of expression: we certainly do not need more.