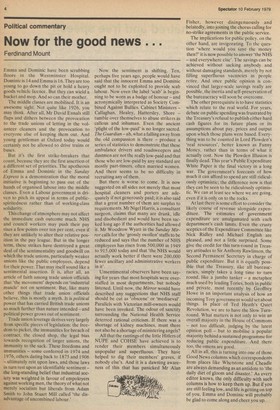 Emma and Dominic have been scrubbing floors in the Westminster Hospital. Dominic is 14 and Emma is 16. They are too young to go down the pit or hold a heavy goods vehicle licence. But they can wield a bucket and mop. And so can their mother.

The middle classes are mobilised. It is an awesome sight. Not quite like 1926, you may think. After all, Mr David Ennals still flaps and dithers between the provocation to the trade unions of letting in the volunteer cleaners and the provocation to everyone else of keeping them out. And young gentleman at Oxford today would certainly not be allowed to drive trains or buses.

But it's the first strike-breakers that count, because they are the first assertion of a different set of priorities. The apotheosis of Emma and Dominic in the Sunday Express is a demonstration that the moral initiative is beginning to pass out of the hands of organised labour into the middle classes. Even a Labour government is driven to pitch its appeal in terms of publicspiritedness rather than of working-class solidarity.

This change of atmosphere may not affect the immediate cash outcome much. NHS and council workers may push their pay rises a few points over ten per cent, even if they are unlikely to alter their relative position in the pay league. But in the longer term, these strikes have destroyed a great deal of the sentimentality and goodwill on which the trade unions, particularly weaker unions like the public employees, depend for their power. That may itself sound like a sentimental assertion. It is, after all, an article of faith among trade union officials that 'the movement' depends on 'industrial muscle' not on sentiment. But, like many other things that trade union officials believe, this is mostly a myth. It is political power that has carried British trade unions so much further than nature intended — and political power grows out of sentiment.

Trade union leverage derives very largely from specific pieces of legislation: the freedom to picket, the immunities for breach of contract, the closed shop, the legal bias towards recognition of larger unions, the immunity to the sack. These freedoms and immunities — some conferred in 1974 and 1976, others dating back to 1875 and 1906 — ultimately rest upon laws, and those laws in turn rest upon an identifiable sentiment — the long-standing belief that industrial society was weighted in favour of empoloyers against working men, the theory of what not merely socialists but liberals from Adam Smith to John Stuart Mill called 'the disadvantage of uncombined labour.' Now the sentiment is shifting. Ten, perhaps five years ago, people would have said that the innocent Emma and Dominic ought not to be exploited to provide scab labour. Now even the label 'scab' is begin ning to be worn as a badge of honour — and acronymically interpreted as Society Com bined Against Bullies, Cabinet Ministers — Callaghan, Healey, Hattersley, Shore — tumble over themselves to abuse strikers as callous and inhuman. Even the ancient 'plight of the low-paid' is no longer sacred. The Guardian —ah, what a falling away from the old compassion is there — produce a series of statistics to demonstrate that these ambulance drivers and roadsweepers and dustmen are not the really low-paid and that those who are low-paid by any standard are mostly part-timers, often married women. And there seems to be no difficulty in recruiting any of them.

But there is worse to come. It is now suggested on all sides not merely that most hospital cleaners and porters are ade quately if not generously paid; it is also said that a great number of them are surplus to requirements. Mr Nigel Harris, a consultant surgeon, claims that many are drunk, idle and disobedient and would have been sac ked long ago if the authorities had allowed it. Mr Woodrow Wyatt in the Sunday Mirror calls for the 'grossly swollen' staffs to be reduced and says that the number of NHS employees has risen from 500,000 in 1949 to 915,000 today and that 'the NHS would actually work better if there were 200,000 fewer ancillary and administrative workers in it'.

Unsentimental observers have been saying for years that most hospitals were over staffed in most departments, but nobody listened. Until now, the Mirror would have described any suggestions that NHS staff should be cut as 'obscene' or 'mediaeval'. Parallels with Victorian mill-owners would have been invoked. The odour of sanctity surrounding the National Health Service deterred rational criticism. If there was a shortage of kidney machines, must there not also be a shortage of ministering angels?

All that the rantings of the little Hitlers of NUPE and COHSE have achieved is to render their members simultaneously unpopular and superfluous. They have helped to dig their members' graves, if nobody else's. And it is a dawning awareness of this that has panicked Mr Alan Fisher, however disingenuously and belatedly, into joining the chorus calling for no-strike agreements in the public service.

The implications for public policy, on the other hand, are invigorating. To the question 'where would you save the money then?' it is now possible to answer 'the NHS — and everywhere else'. The savings can be achieved without sacking anybody and without damaging standards, merely by not filling superfluous vacancies as people retire. And once public opinion is convinced that larger-scale savings really are possible, the inertia and self-preservation of the bureaucracy will soon be overcome.

The other prerequisite is to have statistics which relate to the real world. For years, debate on public spending was frustrated by the Treasury's refusal to publish either hard cash figures for its future plans or its assumptions about pay, prices and output upon which those plans were based. Everything was to be counted in Lord Plowden's 'real resources', better known as Funny Money, rather than in terms of what it actually cost. Now the Plowden Illusion is finally dead. This year's Public Expenditure White Paper is the final victory in a long war. The government's forecasts of how much it can afford to spend are still ridiculously optimistic; the difference now is that they can be seen to be ridiculously optimistic. We can at least see where we are going, even if it is only on to the rocks.

At last there is some effort to consider the likely course of revenue alongside expenditure. The estimates of government expenditure are amalgamated with each department's cash limits. Even the crusty sceptics of the Expenditure Committee like Nick Ridley and Michael English are pleased, and not a little surprised. Some give the credit for this turn-round in Treasury attitudes to Sir Anthony Rawlinson, the Second Permanent. Secretary in charge of public expenditure. But it is equally possible that the Treasury, like all bureaucracies, simply takes a long time to turn round, like a jumbo tanker — a metaphor much used by leading Tories, both in public and private, most recently by Geoffrey Howe in an important analysis of how an incoming Tory government would set about things. In place of Ted Heath's Quiet Revolution, we are to have the Slow Turnround. What matters is not only to win an overall majority in the House of Commons — not too difficult, judging by the latest opinion poll — but to mobilise a popular majority behind a sustained programme for reducing public expenditure. And there too, the omens are good.

All in all, this is turning into one of those Good News columns which correspondents from places like Whetstone and Cheadle are always demanding as an antidote to 'the daily diet of gloom and disaster.' As every editor knows, the only difficulty with such columns is how to keep them up. But if you are still feeling low, and life is getting on top of you. Emma and Dominic will probably be glad to come along and cheer you up.