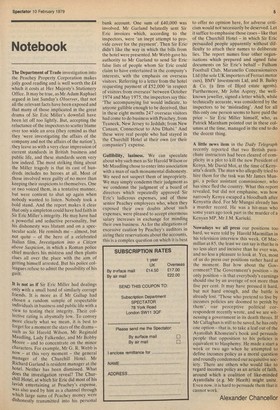 The Department of Trade investigation into the Peachey Property Corporation makes jolly good reading and is well worth the £4 which it costs at Her Majesty's Stationery Office. It may be true, as Mr Adam Raphael argued in last Sunday's Observer, that not all the relevant facts have been exposed and that many of those implicated in the great drama of Sir Eric Miller's downfall have been let off too lightly. But, accepting the reluctance of the inspectors to scatter blame over too wide an area (they remind us that they 'were investigating the affairs of the company and not the affairs of the nation), they leave us with a very clear impression of current standards in British business and public life, and these standards seem very low indeed. The most striking thing about the Miller tragedy is that its cast of hundreds includes no heroes at all. Most of those involved were guilty of no more than keeping their suspicions to themselves. One or two voiced them, in a tentative manner, but were content to shut up again when nobody wanted to listen. Nobody took a bold stand. And the report makes it clear that only a simpleton could have had faith in Sir Eric Miller's integrity. He may have had a powerful and seductive personality, but his dishonesty was blatant and on a spectacular scale. He reminds me — almost, but not quite — of the hero of a celebrated Italian film, Investigation into a Citizen above Suspicion, in which a Roman police chief murders his mistress and then plants clues all over the place with the aim of getting himself arrested. But his police colleagues refuse to admit the possibility of his guilt.

It is not as if Sir Eric Miller had dealings only with a small band of similarly corrupt friends. It is more as if Mr Gallup had chosen a random sample of respectable individuals in business and public life with a view to testing their integrity. Their collective rating is abysmally low. To convey more clearly what we mean, it is best to forget for a moment the stars of the drama — such as Sir Harold Wilson, Mr Reginald Maudling, Lady Falkender, and Mr Bobby Moore — and to concentrate on the minor characters. For example, Mr G. R. Webb is now — at this very moment — the general manager of the Churchill Hotel. Mr Richard Garland is resident manager at the hotel. Neither has been dismissed. What does the investigation reveal? The Churchill Hotel, at which Sir Eric did most of his lavish entertaining at Peachey's expense, was also used by him as a channel through Which large sums of Peachey money were dishonestly transmitted into his personal bank account. One sum of £40,000 was involved. Mr Garland belatedly sent Sir Eric invoices which, according to the inspectors, were 'an inept attempt to provide cover for the payment'. Then Sir Eric didn't like the way in which the bills from the hotel were presented. Mr Webb gave his authority to Mr Garland to send Sir Eric false lists of people whom Sir Eric could claim to have entertained in the company's interests, with the emphasis on overseas visitors. Referring to a letter from the hotel requesting payment of £52,000 'in respect of visitors from overseas' between October 1974 and May 1975, the inspectors say this: 'The accompanying list would indicate, to anyone gullible enough to be deceived, that in these eight months 247 overseas visitors had come to do business with Peachey, from Teaneck, New Jersey to Jeddah; from New Canaan, Connecticut to Abu Dhabi.' And these were real people who had stayed in the Churchill Hotel at their own (or their companies') expense.

Gullibility, laziness. We can speculate about why such men as Sir Harold Wilson or Mr Maudling chose to enter into association with a man of such monumental dishonesty. We need not suspect them of impropriety. We may simply condemn their judgment as we condemn the judgment of a board of directors which repeatedly approved Sir Eric's ludicrous expenses, and of those senior Peachey employees who, when they exposed their own doubts about such expenses, were pleased to accept enormous salary increases in exchange for minding their own business. As for the allegations of excessive caution by Peachey's auditors in airing their reservations about the accounts, this is a complex question on which it is best to offer no opinion here, for adverse criticism would not necessarily be deserved. Let it suffice to emphasise those cases— like that of the Churchill Hotel — in which Sir Eric persuaded people apparently without difficulty to attach their names to deliberate lies. The report names four other organisations which prepared and signed false documents on Sir Eric's behalf — Fulham Football Club, Maranello Concessionaires Ltd (the sole UK importers of Ferrari motor cars), BMV Investments Ltd, and B. Bailey & Co. (a firm of Ilford estate agents). Furthermore, Mr John Asprey, the wellknown jeweller, signed a letter which, while technically accurate, was considered by the inspectors to be 'misleading'. And for all this only one person seems to have paid the price — Sir Eric Miller himself, who, as Patrick Marnham pointed out in these columns at the time, managed in the end to do the decent thing.

A little news item in the Daily Telegraph recently reported that two British parachute instructors had been cleared of complicity in a plot to kill the new President of Kenya, Mr David Moi, at the time Of Kenyatta's death. The man who allegedly tried to hire them for the task was Mr James Mungai, a police assistant commissioner, who has since fled the country. What this report revealed, but did not emphasise, was how narrowly Kenya escaped a bloodbath after Kenyatta died. For Mr Mungai already has a murder record. He was a hit-man who some years ago took part in the murder of a Kenyan MP, Mr J.M. Kariuki.

Nowadays we all press our positions too hard, we were told by Harold Macmillan in his television interview this week. Of Macmillan at 85, the least we can say is that he is no less alert and incisive than he ever was, and no less a pleasure to look at. Yes, most of us do press our positions rather hard at the moment. But how about the Government? The Government's position — its only position — is that everybody's earnings should rise by an average of not more than five per cent. It may have pressed it hard, but not hard enough, and the battle is already lost. 'Those who pretend to live by incomes policies are doomed to perish by them', our perceptive political correspondent recently wrote, and we are witnessing a government in its death throes. If Mr Callaghan is still to be saved, he has only one option — that is, to take a leaf out of the Ayatollah Khomeini's book and persuade people that opposition to his policies is equivalent to blasphemy. He made a start a week or two ago when he attempted to define incomes policy as a moral question and roundly condemned our acquisitive society. There are others who would like to regard incomes policy as an article of faith, around which a coalition of like-minded Ayatollahs (e.g. Mr Heath) might unite. Even now, it is hard to persuade them that it cannot work.