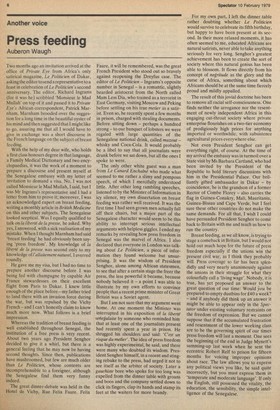 Two months ago an invitation arrived at the office of Private Eye from Africa's only satirical magazine, Le Politicien of Dakar, asking the editor to send a representative to a feast in celebration of Le Politicien's second anniversary. The editor, Richard lngrams (for it was he) scribbled 'Monsieur le Mad Mullah' on top of it and passed it to Private Eye's African correspondent, Patrick Marnham, Marnham brooded over the suggestion for a long time in the beautiful oyster of his mind and then suggested that! might like to go, assuring me that all I would have to give in exchange was a short discourse in the French language on the subject of breast feeding.

With the help of my dear wife, who holds a first class honours degree in that language, a Family Medical Dictionary and two encyclopaedias, it was the work of a moment to prepare a discourse and present myself at the Senegalese embassy with my letter of invitation to demand a visa. No, I was not called Monsieur le Mad Mullah, I said, but I was Mr Ingrams's representative and I had a letter from him to prove it; moreover, I was an acknowledged expert on breast feeding, writing a monthly article in British Medicine on this and other subjects. The Senegalese looked sceptical. Was I equally qualified to talk on la liberte de la presse, he asked. Why yes, I answered, with a sick realisation of my mistake. When I thought Marnham had said 'breast feeding' he had obviously been saying 'press freedom'. My knowledge of la liberte de la presse was second only to my knowledge of l'allaitement nature!, I averred roundly.

He gave me my visa, but I had no time to prepare another discourse before I was being fed with champagne by capable Air France stewardesses on their excellent flight from Paris to Dakar. I knew little enough of the place before — my father tried to land there with an invasion force during the war, but was repulsed by the Vichy French — and I can't honestly claim to know much more now. What follows is a brief impression.

Whereas the tradition of breast feeding is well established throughout Senegal, the institution of a free press is very recent. About two years ago President Senghor decided to give it a whirl, but there is a general feeling that he may now be having second thoughts. Since then, publications have mushroomed, but few are much older than Le Politicien, whose contents are incomprehensible to a foreigner, although the Senegalese find them very funny indeed.

The great dinner-debate was held in the Hotel de Vichy, Rue Felix Faure. Felix Faure, it will be remembered, was the great French President who stood out so bravely against reopening the Dreyfus case. The editor of Le Politicien — Ingrams's opposite number in Senegal — is a romantic, slightly bearded aristocrat from the North called Mam Less Dia, who trained as a terrorist in East Germany, visiting Moscow and Peking before settling on his true metier as a satirist. Even so, he recently spent a few months in prison, charged with stealing documents. Before sitting down — perhaps a hundred strong — to our banquet of lobsters we were regaled with large quantities of the Senegalese national drink, called mazout — whisky and Coca-Cola. It would probably be a libel to say that all journalists were drunk before we sat down, but all the ones I spoke to were.

The only other white guest was a man from Le Canard Enchaine who made what seemed to me rather a slimy and pompous speech, of which I mercifully understood little. After other long rambling speeches, listened to by the Minister of Information in icy silence, my own dissertation on breast feeding was rather well received. It was the first time I had seen grown men actually fall off their chairs, but a major part of the Senegalese character would seem to be this ability to interrupt serious intellectual arguments with helpless giggles. I ended my remarks by revealing how press freedom in Senegal was the marvel of Africa. I also declared that everyone in London was talking about Le Politicien, a piece of information they found welcome but unsurprising. It was the wisdom of President Senghor, alone among African statesmen, to see that after a certain stage the freer the press, the less powerful it became, because nobody believed it — a point I was able to illustrate by my own efforts to convince people that a recent prime minister of Great Britain was a Soviet agent.

But I am not sure that my argument went home. At one moment the Minister was interrupted in his exposition of la liberte seriegalaise by someone who reminded him that at least one of the journalists present had recently spent a year in prison. He shrugged his shoulders and said: 'C'est un risque du metier'. The idea of press freedom was highly experimental, he said, and there were many who doubted its wisdom. President Senghor himself, in a recent and stinging rebuke to the press, had urged it not to see itself as the arbiter of society. Later a gauchiste bore who spoke for too long was expelled from the dinner table with groans and boos and the company settled down to click its fingers, clap its hands and stamp its feet at the waiters for more brandy. For my own part, I left the dinner table rather doubting whether Le Politicien would survive to celebrate its fifth birthday, but happy to have been present at its sec ond. In their more relaxed moments, it has often seemed to me, educated Africans are natural satirists, never able to take anything seriously for very long. Senghor's greatest achievement has been to create the sort of society where this natural genius has been able to blossom. It flows directly from his concept of negritude as the glory and the curse of Africa, something about which Africans should be at the same time fiercely proud and mildly appalled.

The result of this jovial doctrine has been to remove all racial self-consciousness. One finds neither the arrogance nor the resentment of newly independent Africa in this engaging cut-throat society where private enterprise flourishes on a two-tier economy of prodigiously high prices for anything imported or worthwhile, with subsistence agricultural prices everywhere else.

Not even President Senghor can get everything right, of course. At the time of my arrival the embassy was in turmoil over a State visit by Ms Barbara Cartland, who had been invited by the President of the Republic to hold literary discussions with him in the Presidential Palace. Our brilliantly gifted ambassador in Dakar — by coincidence, he is the grandson of a former Rector of Combe Florey — also carries the flag in Guinea-Conakry, Mali, Mauritania, Guinea-Bissau and Cape Verde, but I feel sure these other countries do not make the same demands. For all that, I wish I could have persuaded President Senghor to come back to Britain with me and teach us how to run the country.

Breast feeding, as we all know, is trying to stage a comeback in Britain, but I would not hold out much hope for the future of press freedom especially if the unions win the present civil war, as I think they probably will. Press coverage so far has been splen didly and very nearly unanimously against the unions in their struggle for what they colourfully call a 'living wage'. Nobody, it is true, has yet proposed an answer to the great question of our time: Would you be prepared to empty dustbins for £40 a week?

— and if anybody did think up an answer it might be able to appear only in the Spec tator under existing voluntary restraints on the freedom of expression. But we cannot suppose that if the accumulated frustration and resentment of the lower working class are to be the governing spirit of our times press freedom will last a moment. One sees the beginning of the end in Judge Mynett's summing-up last week when he sent the eccentric Robert Relf to prison for fifteen months for voicing improper opinions about race. The law allows you to express any political views you like, he said quite incorrectly, but you must express them in 'temperate and moderate language'. If only the English, still possessed the vitality, the education, the sensibility, the simple intelligence of the Senegalese.