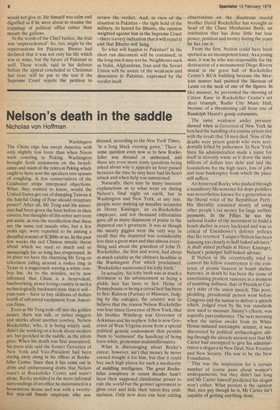 Nelson's death in the saddle

Washington The China rage has swept America with only slightly less force than when Nixon went courting in Peking. Washington brought forth statements on the beneficence and vision of the rulers in Peking which ought to have sent the speakers into spasms of coughing. A few conservatives of the Goldwater stripe interposed objections. What, they wanted to know, would the United States get out of dumping Taiwan it the hateful Gang of Four should recapture power? After all, Mr Teng and his associates had been given the boot before in their careers, but thoughts of this sober sort were put aside, as was the recollection that these are the same red rascals who, but a few years ago, were reported to be aiming a dreadful arsenal of ICBMs at us. In the past few weeks the red Chinese missile threat about which we read so much and so menacingly for so long has evaporated. In its place we have the charming Mr Teng on television riding around a rodeo ring in Texas in a stagecoach waving a white cowboy hat. As to the missiles, we're now informed that China is a benevolent, hardworking, peace loving country in such a technologically backward state that it will — yum-yum — have to buy skillions of dollars worth of advanced equipment from American firms.

Even as Mr Teng rode off into the golden sunset, there was talk, or rather sniggers and smirks about another cowboy, Nelson Rockefeller, who, it is being widely said, didn't die working on a book about modern art, but perished in the saddle, as the idiom goes. When his death was first announced, his press aide said the former Governor of New York and Vice-President had been slaving away along in his offices at Rockefeller Centre. Since then it has come out in dribs and embarrassing drabs that Nelson wasn't at Rockefeller Centre and wasn't alone. Rocky perished in the more informal surroundings of an office he maintained in a brownstone house and was with a twentyfive year-old female employee who was dressed, according to the New York Times, `in a long black evening gown.' There is some question even now as to how Rockefeller was dressed or undressed, and there are even more nasty questions being asked about why it appears an hour passed between the time he may have had his heart attack and when help was summoned.

Naturally, there may be many innocent explanations as to what went on during Nelson's final night on earth, but in Washington and New York, at any rate, people were making up macabre scenarios as Henry Kissinger, an ex-Rockefeller employee, and ten thousand editorialists gave off as many diapasons of praise to the departed one's greatness. It was as though the smutty giggles were the only way to recall that the departed was considerably less than a great man and that almost everything said about the grandson of John D. Rockefeller, the first and worst, had about as much validity as the obituary headline in the Washington Post which proclaimed, `Rockefeller surmounted his lofty birth.'

In actuality, his lofty birth was as much a detriment to his advancement as being a pickle heir has been to Sen. Heinz of Pennsylvania or being a cereal heir has been to Sen. Ralston (Purina) or Missouri. Judging by the eulogies, the country was to believe that the reason Nelson Rockefeller was four times Governor of New York, that his brother Winthrop was Governor of Arkansas and his nephew John is now Governor of West Virginia arose from a special political genetic endowment that permits them to `surmount' the handicap of being born white, protestant multimillionaires.

What is discouraging about Rocky's career, however, isn't that money he never earned bought it for him, but that it could buy such high places for such a mediocrity of middling intelligence. The great Rockefeller conspiracy in recent decades hasn't been their supposed clandestine power to rule the world but the genteel agreement to gloss over and hide their talent-free ordinariness. Only now does one hear cutting observations on the disastrous record brother David Rockefeller has wrought as head of the Chase Manhattan Bank, an institution that has done little but lose power, position and money during the years he has run it.

From the first, Nelson could have been spotted as an incompetent loser. As a young man, it was he who was responsible for the destruction of a monumental Diego Rivera mural in the great hall of Rockefeller Centre's RCA building because the Mexican master had painted the likeness of Lenin on the neck of one of the figures. In like manner, he prevented the showing of Citizen Kane in Rockefeller Centre's art deco triumph, Radio City Music Hall, because of a threatening call from one of Randolph Hearst's gossip columnists.

The same weakness under pressure showed when as Governor of New York he botched the handling of a routine prison riot with the result that 38 men died. Nine of the deaths were prison guards who were accidentally killed by policemen. In New York State his administration made a name for itself in slovenly waste as it drove the state billions of dollars into debt and laid the foundations for the high taxes, loss of jobs and near bankruptcy from which the place still suffers.

An hysterical Rocky who pushed through a mandatory life sentence for dope peddlers was nevertheless known for a generation as the liberal voice of the Republican Party. His liberality consisted mostly of using other people's tax money for large welfare payments. In the Fifties he was the national leader of the movement to build a bomb shelter in every backyard and was so critical of Eisenhower's defence policies that Ike retorted: `I suspect Nelson has been listening too closely to half-baked advisers.' A shaft aimed perhaps at Henry Kissinger, Nelson's principal half-baked adviser.

If Nelson in life eccentrically tried to convert his fellow countrymen to the exis tence of atomic beavers in bomb shelter burrows, in death he has been the cause of entertaining prurient rumours at a moment of numbing dullness, that of President Car ter's state of the union speech. This poor, plodding, presidential person went before Congress and the nation to deliver a speech which, judged even by the low standards now used to measure Jimmy's efforts, was soporific past endurance. The next morning when the nation awoke from its White House-induced narcaleptic seizure, it was discovered by political archaeologists sifting through the already ancient text that Mr Carter had attempted to give his administration a slogan a la New Deal, New Frontier and New Society. His was to be the New Foundation.

This was the inspiration for a certain number of coarse puns about women's undergarments, but they didn't last long and Mr Carter himself predicted his slogan won't either. What persists is the opinion that, nice guy though he is, Mr Carter isn't capable of getting anything done.