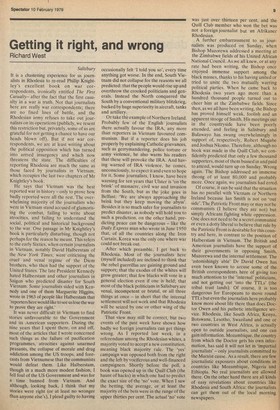 Getting it right, and wrong

Salisbury It is a chastening experience for us journalists in Rhodesia to re-read Phillip Knightley's excellent book on war correspondents, ironically entitled The First Casualty— after the fact that the first casualty in a war is truth. Not that journalists here are really war correspondents; there are no fixed lines of battle, and the Rhodesian army refuses to take out journalists on its operations (publicly, we resent this restriction but, privately, some of us are grateful for not getting a chance to have our heads blown off). But if not war correspondents, we are at least writing about the political opposition which has turned into armed insurgency and which now threatens the state. The difficulties of reporting Rhodesia are much the same as those faced by journalists in Vietnam, which occupies the last two chapters of Mr Knightley's book.

He says that Vietnam was the best reported war in history — only to prove hovy badly reported were all the rest. The overwhelming majority of the journalists who were in Vietnam stand accused of glamorising the combat, failing to write about atrocities, and failing to understand the social, political and historical background to the war. One passage in Mr Knightley's book is particularly disturbing, though not perhaps for the reason he meant. This refers to the early Sixties, when certain journalists in Vietnam, notably David Halberstam of the New York Times, were criticising the cruel and venal regime of the Diem brothers, who then had the support of the United States. The late President Kennedy hated Halberstam and other journalists in Saigon who predicted disaster for South Vietnam. Some journalists sided with Kennedy and one of them Marguerite Higgins, wrote in 1963 of people like Halberstam that 'reporters here would like to see us lose the war to prove they are right.'

It was never difficult in Vietnam to find stories unfavourable to the Government and its American supporters. During the nine years that I spent there, on and off, most of the articles that I wrote concerned such things as the failure of pacification Programmes, atrocities against unarmed Peasants, the collapse of morale and drug addiction among the US troops, and fore casts from Vietnamese that the communists would defeat them. Like Halberstam, though in a much more modest fashion, I fell foul of the US Government and was for a time banned from Vietnam. And although, looking back, I think that my stories were right (or at least no wronger than anyone else's), I plead guilty to having occasionally felt 'I told you so', every time anything got worse. In the end, South Vietnam did not collapse for the reasons we all predicted: that the people would rise up and overthrow the crooked politicians and generals. Instead the North conquered the South by a conventional military blitzkrieg, backed by huge superiority in aircraft, tanks and artillery.

Or take the example of Northern Ireland. Probably few of the English journalists there actually favour the IRA, any more than reporters in Vietnam favoured communism. But if a reporter does his job properly by explaining Catholic grievances, such as gerrymandering, police torture or army violence, he also warns his readers that these will provoke the IRA. And having warned of IRA violence, he comes, unconsciously, to expect it and even to hope for it. Some journalists, I know, have been warning for ten years that Ulster is 'on the brink' of massacre, civil war and invasion from the South, but as the joke goes in Belfast: 'We are always approaching the brink but they keep moving the abyss'. Besides it is so much safer for journalists to predict disaster, as nobody will hold you to such a prediction, on the other hand, predicting peace can be dangerous — like the Daily Express man who wrote in June 1950 that, of all the countries along the Iron Curtain, Korea was the only one where war could not break out.

After which preamble, I get back to Rhodesia. Most of the journalists here (myself included) are inclined to think that the rebel guerrillas are gaining ground and support; that the exodus of the whites will grow greater; that few blacks will vote in a general election even if one is held; that most of the black politicians in Salisbury are venal, incompetent or brutal, or all three things at once — in short that the internal settlement will not work and that Rhodesia will be seized by one or other wing of the Patriotic Front.

That view may still be correct, but two events of the past week have shown how badly we foreign journalists can get things wrong. As I reported last week, in a referendum among the Rhodesian whites, a majority voted to accept a new constitution, meaning black majority rule. The 'yes' campaign was opposed both from the right and the left by vociferous and well-financed campaigners. Shortly before the poll, a book was opened up in the Quill Club (the haunt of hacks) in which one had to predict the exact size of the 'no' vote. When I saw the betting, the average, or at least the majority of the bets were in the range of the upper thirties per cent. The actual `no' vote was just over thirteen per cent, and the Quill Club member who won the bet was not a foreign journalist but an Afrikaner Rhodesian.

A further embarrassment to us journalists was produced on Sunday, when Bishop Muzorewa addressed a meeting at the Zimbabwe fields of his United African National Council. As we all knew, or at any rate had been writing, the Bishop once enjoyed immense support among the black masses, thanks to his having united or tried to unite the two mutually warring political parties. When he came back to Rhodesia two years ago more than a hundred thousand people turned out to cheer him at the Zimbabwe fields. Since then, as we all have been writing, the Bishop has proved himself weak, foolish and an apparent stooge of Smith. His meetings out in the countryside have been poorly attended, and feeling in Salisbury and Bulawayo has swung overwhelmingly in support of, respectively, Robert Mugabe and Joshua Nkomo. Therefore, although no book was made in the Quill Club, we confidently predicted that only a few thousand . supporters, most of them bussed in and paid to attend, would turn up on Sunday. Wrong again. The Bishop addressed an immense throng of at least 80,000 and probably more. Once again, we journalists had erred.

Of course, it can be said that the situation has no parallel with Vietnam or Northern Ireland because Ian Smith is not on 'our side'. Theyatriotic Front may or may not be communists (I believe they are not) but simply Africans fighting white oppression. One does not need to be a secret communist or even a dotty liberal to believe that rule by the Patriotic Front is desirable for this country and here, in contrast to the position of Halberstam in Vietnam. The British and American journalists have the support of their governments in opposing Smith, Muzorewa and the internal settlement. The 'astonishingly able' Dr David Owen has even been known to accuse some of the British correspondents here of giving too much attention to the `internal' politicians, and not getting out 'into the TTLs' (the tribal trust lands). Of course, it is too dangerous for Europeans to move round TTLs but even the journalists here probably know more about life there than does Doctor Owen and his pathetic intelligence service. Rhodesia, like South Africa, Kenya, Botswana, Lesotho, Swaziland and one or two countries in West Africa, is actually open to outside journalists, and one can gain information. Mozambique, the country from which the Doctor gets his own information, has said it will not let in 'impartial journalists' — only journalists committed to the Marxist cause. As a result, there are few journalistic exposures about conditions in countries like Mozambique, Nigeria and Ethiopia. No real journalists are allowed there. On the other hand there are all kinds of easy revelations about countries like Rhodesia and South Africa: the journalists can get them out of the local morning newspapers.