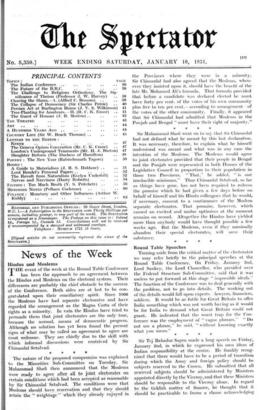 Hindus and Moslems THE event of the week at the Round Table Conference has been the approach to an agreement between the Hindus and Moslems on the electoral system. Their differences are probably the chief obstacle to the success of the Conference. Both sides are at last to be con- gratulated upon their conciliatory spirit. Since 1906 the Moslems have had separate electorates and have regarded the arrangement as the Magna Carta of their rights as a minority. In vain the Hindus have tried to persuade them that joint electorates are the only true, because the normal, means of democratic progress. Although no solution has yet been found the present signs of what may be called an agreement to agree are most welcome. They are chiefly due to the skill with which informal _discussions were contrived by Sir ehimanlal Setalvad.