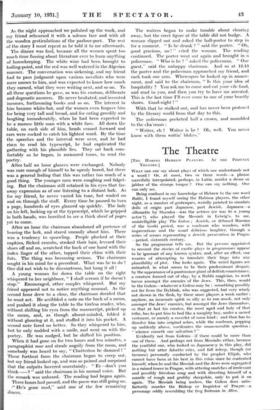 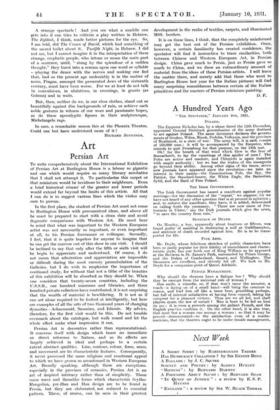 [Tim II. BIMA HEBREW PLAYERS. Ar TIIE PHOENIX THEATRE.] WHAT can one say about plays of which one understands not a word ? Or, at most, two or three words—a phrase mercifully interpolated, perhaps, in Latin, amidst a drone or jabber of the strange tongue ? One can say nothing. One can only see.

Being confined in my knowledge of Hebrew to the one word Rabbi, I found myself seeing the Habima players, the other night, as a number of grotesques, weirdly painted to simulate dolls of origin part Japanese, part Jewish. Japanese--a silhouette by Sharaku— was the actress (or was he a young actor ?) who played the Messiah in Leiwig's, to me, unintelligible play The Galen? ; Jewish, or debased Russian of the Gorki period, was a madman who wanders, with imprecations and the usual delirious laughter, through a series of scenes representing a Jewish persecution in Prague —period, sixteenth century.

So the programme tells me. But the persons appointed to recount the stories of exotic plays in programmes appear to be ignorant of any known syntax, and, after an effort, one wearies of attempting to translate their lingo into any plausibility of plot. One looks again. The weird figures are animated, in what seems to be their predominant despair, by the appearance of a pantomime giant of doltish countenance, a creature formed out of clay, by a Rabbi magician, to work havoc amongst the enemies of the Jews. This, then, would be the Golem—whatever a Golem may be : something possibly not far from the Dybbuk, who was suggested, but very wisely not shown in the flesh, by these same players a week earlier : anyhow, an incarnate spirit so silly as to run amok, not only amongst the Jews' enemies, but amongst the Jews themselves, so that at last his creator, the most aged and holy of that tribe, has to put him to bed like a naughty boy, under a sacred vestment, or merely a coverlet of some kind ; and then has to dissolve him into original ashes, while the madman, popping up suddenly above, vociferates the unanswerable question : whence cometh our salvation ? "

Evidently not from Golems—if there could be more than one of these. And perhaps not from Messiahs either, because the youthful one, who looked so Japanese-y in this play, did nothing but utter falsetto cries, and fall asleep, though (or because) personally conducted by the prophet Elijah, who cannot have been at his best in this crisis since he contented himself, when he and the Messiah and the Jews were segregated in a ruined tower in Prague, with uttering snatches of irrelevant and possibly frivolous song and with divesting himself of a mantle of rough and grubby sheepskin, only to put it on again. ' The Messiah being useless, the Golem does satis- factorily murder the Bishop or Inquistor of Prague—a personage Oddly resembling the frog footman in -Mice. A strange spectacle ! And you see what a muddle one gets into if one tries to criticize a play written in Hebrew. The Dybbuk, I think, made better pictures for the eye. So, I am told, did The Crown of David, which had something of the sacred ballet about it. Twelfth Night, in Hebrew, I did not see, but I cannot imagine it in the interpretation of these strange, emphatic people, who intone or moan the main part of a sentence, until, " stung by the splendour of a sudden thought," they burst into a scream upon one word or syllable —playing the deuce with the nerves and making one feel that, bad as the present age undeniably is in the matter of noise, Prague, amongst- the persecuted Jews of the sixteenth century, must have been worse. For we at least do not talk in convulsions, in ululations, in croonings, in grunts (as Golems) and in wails.

But, then, neither do we, in our close clothes, stand out so beautifully against dim backgrounds of ruin, or achieve such noble gestures in witness of our woes and passionate hopes, as do these apocalyptic figures in their sculpturesque, Michelangelo rags.

In sum, a remarkable season this at the Phoenix Theatre. Could one but have understood more of it