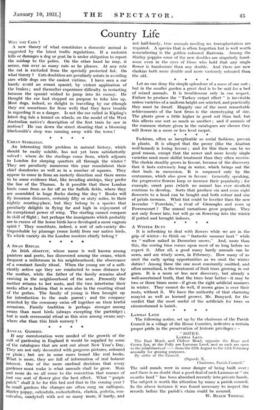 An interesting little problem in natural history, which should be easily soluble, has not yet been satisfactorily solved : where do the starlings come from, which adjourn to London for sleeping quarters all through the winter ? They are peculiarly numerous this year roundabout their chief domitories as well as in a number of squares. They appear to come in from an easterly direction and there seems to be some evidence that, like invading airships, they prefer the line of the Thames. Is it possible that these London birds come from as far off as the Suffolk fields, where they are assembled in huge flocks during the day ? Rooks will fly immense distances, certainly fifty or sixty miles, to their nightly roosting-place, but they belong to a species that peculiarly delights in flying far and high in enjoyment of its exceptional power of wing. The starling cannot compare in skill of flight ; but perhaps the immigrants which probably are in excess of the home birds have developed a more vagrom spirit ? They constitute, indeed, a sort of sub-variety dis- tinguishable by plumage (some hold) from our native birds. To which variety do the London roosters chiefly belong ?