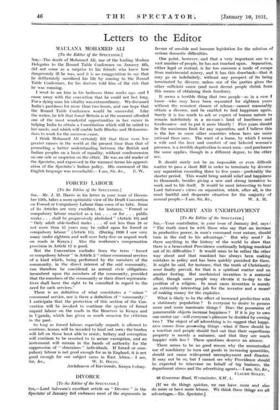 [To the Editor of the SPECTATOR.] Sia,—Lord Salvesen's excellent article on " Divorce in the Spectator of January 8rd embraces most of the arguments in

favour of sensible and humane legislation for the solution. of serious domestic difficulties.

One point, however, and that a very important one to a vast number of people, he has not touched upon. Separation, either legal or mutual, is far too common a mode of escape from matrimonial misery, and it has this drawback—that it may go on indefinitely, without any prospect of its being terminated by divorce, unless one of the parties gives -the other sufficient cause (and most decent people shrink from this means of obtaining their freedom).

It seems a terrible thing that two people—as in a case I know—who may have been separated for eighteen years without the remotest chance of release—cannot reasonably obtain a divorce, and be enabled to find happiness again. Surely it is too much to ask or expect of human nature to remain indefinitely in a no-man's land of loneliness and lovelessness—not to put it more bluntly ! Five years should be the maximum limit for any separation, and I believe this is the law in some other countries whose laws are more rational than ours. The want of a home, by which I mean a wife and the love and comfort of one beloved woman's presence, is a terrible deprivation to most men—and perchance the same applies, though in a different degree, to the other

• It should surely not be an impossible or even difficult matter to pass a short Bill in order to terminate by divorce any separation exceeding three to five years—preferably the shorter period. This would bring untold relief and happiness to thousands, besides giving a new and strong -incentive to work and to life itself. It would be most interesting to hear Lord Salvesen's views on separation, which, after all, is the most hurtful and desperate situation for the majority of