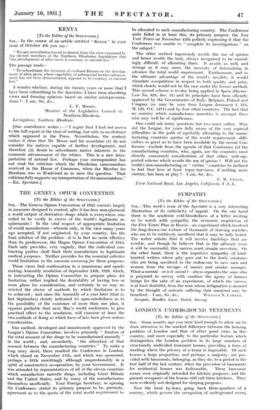 [To the Editor of the SPECTATOR.] S1R,—This week's issue of the Spectator is a very interesting illustration of its catholicity of appeal. On the one hand there is the academic cold-bloodedness of a letter inviting us to watch with sympathy the economic empiricism of the Five Years' Plan in Russia—an experiment which involved the long-drawn-out torture of thousands of starving wretches who are to be ruthlessly sacrificed that it may be fully tested. The writer admits that it will involve hardships that are terrible, and though he believes that in the ultimate issue it will be successful, this success must remain uncertain. On the other hand, there is the impulsive sympathy of kind- hearted writers whose pity goes out to the lowly creatures who are being sacrificed in the endeavour to save men and women from the ravages of cancer and similar scourges. What a mental—or is it moral ?—abyss separates the man who is prepared to survey with candour the agony of hunum beings for the sake of an experiment, of which the success is at least doubtful, from the man whose indignation is aroused by the thought of animals suffering that mankind may be