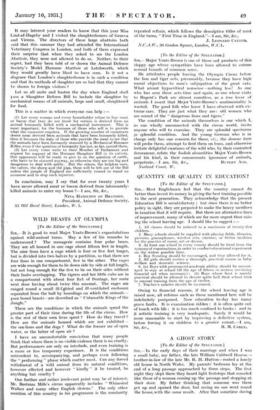 [To the Editor of the SPECTATOR.] 8111,--It is good to read Major Yeats-Brown's expostulations against wild-animal turns. May a few of his remarks be underscored ? The menagerie contains four polar bears. They 'are all housed in one cage about fifteen feet in length. The nine lions have a cage which is four or five feet longer, but is divided into two halves by a partition, so that there are four lions in one compartment, five in the other. The cages are wide enough for them to lie down side by side at full length, but not long enough for the five to lie on their sides without their limbs overlapping. The tigress and her little cubs are in a compartment with about four feet of frontage, her mate next door having about twice this. amount.. The cages are ranged round a small ill-lighted and ill-ventilated enclosure separated from the hall by hoardings on which the animals— poor bored beastg—are described as " Untamable Kings of the Jungle." . -

These are the conditions in which the animals spend the greater part of their time during the life of the circus. How is the rest of their own lives spent ? How do they travel ? How are the. animals housed which are not exhibited--

a the sea-lions and the dogs ? What do the former see of open water, or the latter of open air ?

I have an uncomfortable conviction that many people think that where there is no visible violence there is no cruelty. But performances are only an interlude, and even training is a more or less temporary experience. It is the conditions antecedent to, accompanying, and perhaps even following the " performing " phase which matter most. Can any forced withdrawal of a wild animal from its natural conditions, however effected and however " kindly " it be treated, be anything but cruelty ? .

One further and rather irrelevant point may be of interest. Mr. Bertram Mills's circus apparently includes " Whimsical Walker and many other English clowns." . The only other mention of this country in his- programme is the constantly repeated refrain, which follows the descriptive titles of most of the turns, " First Time in England."—I am, Sir, &c.,