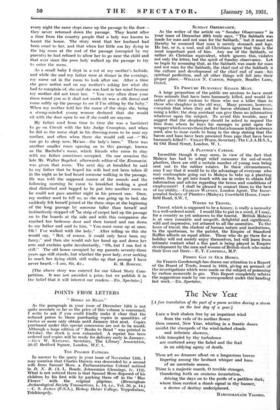 As the paragraph in your issue of December 13th is

not quite accurate so far as the price of this volume is concerned, I write to ask if you could kindly make it clear that the reduced prices to those purchasing copies in quantities of twelve or more only obtain until January 31st next. Copies purchased under this special concession are not to be resold. Although a large edition of " Books to Read " was printed in October, the stock is now exhausted. A reprint has been ordered and copies will be ready for delivery early in January. —Guy W. KEELING, Secretary, The Library Association, 26-27 Bedford Square, London, W.C. 1.

In answer to the query in your issue of November 15th, I may mention that Charles Darwin was descended by a second wife from Samuel More, a Parliamentarian Colonel noticed in D. N. B. (A. L. Reade, Johnsonian Gleanings, iv. 112). What is not noticed there is that Samuel More disposed of his children by his first wife by packing them off in the May Flower' with the original pilgrims. (Birmingham Archaeological Society Transactions, L. 14, i.e., Vol. 50, p. 14.) —C. S. JAMES (F.S.A.), Bishop Heber College, Teppakulam, Trichinopoly. SUNDAY OBSERVANCE.

A large proportion of the public are anxious to have meat from animals that have been humanely killed, and would far rather give their custom to those who use a killer than to those who slaughter in the old way. Many persons, however, complain that when they ask for bacon obtained from firms using a killer, the shop assistant can give them no information whatever upon the subject. To avoid this trouble, may I suggest that the shopkeeper should be asked to request the firm from whom he buys his sausages to print upon the wrapper which covers them the fact that a humane killer is always used, also to issue cards to hang in the shop stating that the bacon and ham have been procured from pigs that have been humanely killed ?—VIOLET WOOD, Secretary, The C.J.A.H.S.A., 42 Old Bond Street, London, W. 1.

Incredible though it may seem, in view of the fact that Malaya has had to adopt relief measures for out-of-work planters, there are still a certain number of young men being sent out to the rubber estates. In these circumstances, may I say that it would be to the advantage of everyone who may contemplate going out to Malaya to take up a planting career, first, to get into touch with me in order to obtain full information and advice regarding the terms and conditions of employment? I shall be pleased to counsel them to the best of my ability.—CHARLES WATNEY, London Agent, The Incor- porated Society of Planters (Malaya), Courtfield House, Court- field Road, S.W. 7.

Travel, which is supposed to be a luxury, is really a necessity to a well-ordered mind. I would like to put in a word, if I may, for a country as yet unknown to the tourist. British Malaya is at once romantic and unspoilt, delightful and significant, wild and impressive, yet attuned to all the amenities. To the lover of travel, the student of human nature and institutions, to the sportsman, to the patriot, the Empire of Stamford Raffles affords an equal allure. Those who do go there for a holiday will not merely enjoy themselves, but will learn front intimate contact what a fine part is being played in Empire development by the men and women of British-stock who make their lives out there.—E. T. CAMPBELL, M.P.

POISON GAS IN OUR HOMES.

Sir Francis Goodenough has drawn our attention to a Report of the Board of Trade, issued in 1924, giving an account of the investigations which were made on the subject of poisoning by carbon monoxide in gas. This Report completely refutes the suggestions made by our correspondent under this heading last week.—En. Spectator.