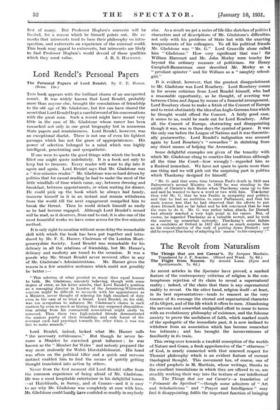 Tnis book appears with the brilliant charm of an unexpected comet. It was widely known that Lord Rendel, probably more than anyone else, brought the consolations of friendship to the old age of Mr. Gladstone, but few can have shared the secret that Lord Bendel kept a careful record of his conversations with the great man. Such a record might have meant very little in the case of Mr. Gladstone whose career has been ransacked not only in one great biography but in numerous State papers and reminiscences. Lord Rendel, however, was an exceptional diarist. There is not one of even his lightest passages which has not the grace of appropriateness. His power of selection belonged to a mind which was highly intelligent, penetrating and sympathetic.

If one were to quote the good things with which the book is filled one might quote indefinitely. It is a book not only to keep but to treasure. Every reader will want to dip into it again and again. Lord Rendel says that Mr. Gladstone was a "five-minutes reader." Mr. Gladstone was so hard driven by politics that for casual reading he had to make the most of the little windfalls of time which came, say, between dressing and breakfast, between appointments, or when waiting for dinner.

He could pick up the book which he always had handy, immerse himself in it in an instant and remain withdrawn from the world till the next engagement compelled him to break the thread. Then he could detach himself as easily as he had become engaged. Although Lord Rendel's record will be read, as it deserves, from end to end, it is also one of the most bountiful works we have come across for the five-minutes method.

It is only right to mention without more delay the remarkable skill with which the book has been put together and intro- duced by Mr. F. E. Hamer, Chairman of the London Mont- gomeryshire Society. Lord Bendel was remarkable for his delicacy in all the relations of friendship, but Mr. Hamer's delicacy and modesty are tuned to the occasion. It was a puzzle why Mr. Stuart Rendel never received office in any of Mr. Gladstone's Administrations. Mr. Hamer gives the reason in a few sensitive sentences which could not possibly be better :—

" This solution of what puzzled so many does equal honour to both. Mr. Gladstone, sincerely believing, though with some degree of error, as his letter admits, that Lord Rendel's position as a managing director in London of the Armstrong-Whitworth concern might be difficult to reconcile with his appointment as a Minister, never thought of relaxing his high standard of duty oven in the case of so tried a friend. Lord Rendel, on his side, was too scrupulous to influence Mr. Gladstone's choice in such matters by even so much as hinting that any supposed disqualifica- tion arising from his commercial associations might easily be removed. Thus these two high-minded friends demonstrated the austere purity of their friendship, and only learnt of the restraint each had practised towards the other when it was too late to make amends."

Lord Rendel, indeed, lacked what Mr. Hamer calls " the necessary ruthlessness." But though he never be- came a Minister he exercised great influence ; he was known as the Member for Wales " and nobody prepared the way more zealously for Welsh Disestablishment. His hand was often on the political tiller and a quick and nervous instinct enabled him to fmd the means of quietly getting thought translated into action by others.

Never from the first moment did Lord Rendel suffer from the common experience of being afraid of Mr. Gladstone. Iie was a most hospitable entertainer in his delightful homes --at Hatchlands, in Surrey, and at Cannes—and it is easy to see why Mr. Gladstone was completely at ease with him. Mr. Gladstone could hardly have confided so readily in anybody else. As a result we get a series of life-like sketches of political characters and of descriptions of Mr. Gladstone's difficulties not only with his problems of State but with the exacting temperaments of his colleagues. To all his political friends Mr. Gladstone was " Mr. G." Lord Granville alone called him " Gladstone." How very significant that was ! Sir William Harcourt and Mr. John Morley were touchy far

beyond the, ordinary measure of politicians. Sir Henry Campbell-Bannerman once described Mr. Morley as a " petulant spinster " and Sir William as a " naughty school-

It is evident, however, that the greatest disappointment to Mr. Gladstone was Lord Rosebery. Lord Rosebery comes in for severe criticism from Lord Bendel himself, who had a reasonable opportunity, as he thought, of averting war between China and Japan by means of a financial arrangement. Lord Rosebery chose to make a fetish of the Concert of Europe and to resist obstinately the idea of an Anglo-German loan which he thought would offend the Concert. A fairly good case, it seems to us, could be made out for Lord Rosebery. After all, the Concert of Europe, obstructing and disappointing though it was, was in those days the symbol of peace. It was the only one before the League of Nations and it was theoretic- ally praiseworthy. Lord Rendel's indignation was aroused again by Lord Rosebery's " cowardice " in shrinking from any direct means of helping- the Armenians.

Some delightful examples are given of the tenacity with which Mr. Gladstone clung to courtier-like traditions although all the time the Court—how wrongly !—regarded him as a Radical iconoclast. We have not space to quote more than one thing and we will pick out the surprising part in politics which Thackeray designed for himself.

" Mr. G. said that some time between Peel's death in 1850 and Palmerston's second Ministry in 1859 he was standing in the middle of Christie's Sale Room when Thackeray came up to him and said he wanted to have a word or two with him. Thackeray then told Mr. G. that he was Peelite in sympathy and politics, and that he' had an ambition to enter Parliament, and that his main reason was that he had observed that the efforts to put down Disraeli had so far failed and he felt- convinced that he was the man to do it. Mr. G. was rather taken aback, for Disraeli had already reached a very high point in his career. But, of course, he regarded Thaekeray as a valuable recruit, and he took the matter up somewhat seriously. Thackeray's utter failure as a candidate at Oxford in 1857 did not so much surprise him as his miscalculation of the task of putting down Disraeli : nor did he suspect Thackeray of adapting his ' reason ' to his company ! "