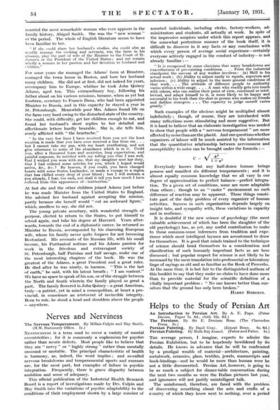 The Nervous Temperament. By Millais Culpin and May Smith. (H.M. Stationery Office. Is.) NERVOUSNESS is a term used to cover a variety of mental eccentricities ; for it is commonly a euphemism for psychic rather than neuric defects. Most people like to believe that they are " nervy " or " highly strung " rather than mentally unsound or unstable. The principal characteristic of health is harmony, as, indeed, the word implies ; and so-called nervous breakdowns and temperamental upsets and excesses are, for the most part, but examples of failure in psychic integration. Frequently, there is grave disparity between ambition and sense of adequacy.

This official publication of the Industrial Health Research Board is a report of investigations made by Drs. Culpin and May Smith into the variations of psychic adaptability to the conditions of their employment shown by a large number of

assorted individuals, including clerks, factory-workers, ad- ministrators and students, all actually at work. In spite of the impressive auspices under which this report appears, and the somewhat portentous manner of the book itself, it is difficult to discover in it any facts or any conclusions with which every person of average social experience—certainly everyone actively engaged in the conduct of industry—is not already familiar :—

" It is recognized by some clinicians that many breakdowns are exacerbations of pre-existing conditions. . . . From the industrial standpoint the success of any worker involves : (a) Skill in his actual work ; (b) Ability to adjust easily to equals, superiors and inferiors ; (c) Ability to adjust to the more general conditions of that work. . . . The attitude of different people to authority varies within a wide range. . . . A man who readily gets into touch with others, who can realize their point of view, emotional or intel- lectual, and adapt himself to it, is more likely to be happy and successful in his work than the shut-in person who makes no friends and dislikes strangers. . . . The capacity to judge oneself varies greatly."

Such examples of the obvious might be multiplied almost indefinitely ; though, of course, they are interlarded with many reflections more stimulating and more suggestive. But it is hard to believe that an elaborate investigation was needed to show that people with a " nervous temperament " are more affected by noise than are the placid. And one questions whether organizers of labour will be much assisted by the information that the quantitative relationship between nervousness and susceptibility to noise can be brought under the formula :—

C= 1 + qi 2 Everybody knows that any half-dozen human beings possess and manifest six different temperaments ; and it is almost equally common knowledge that we all vary in our degree of approximation to perfect balance—perfect integra- tion. To a given set of conditions, some are more adaptable than, others ; though to an " easier " environment no such difference of reaction may be apparent. These things consti- tute part of the daily problem of every organizer of human activities. Success in such organization depends largely on insight into, and sympathy with, these variations in capacity and in resilience.

It is doubtful if the new science of psychology (the most valuable achievement of which has been the slaughter of the old psychology) has, as yet, any useful contribution to make to those common-sense inferences from tradition and expe- rience which most intelligent laymen are accustomed to draw for themselves. It is good that minds trained to the technique of science should bend themselves to a consideration and classification of such humanly important facts as are here discussed ; but popular respect for science is not likely to be increased by the mere translation into professorial or laboratory lingo of sayings as old and as familiar as the Book of Proverbs. At the same time, it is but fair to the distinguished authors of this booklet to say that they make no claim to have done more than to provide material for the scientific definition of a vitally important problem : " No one knows better than our- selves that the ground has only been broken."