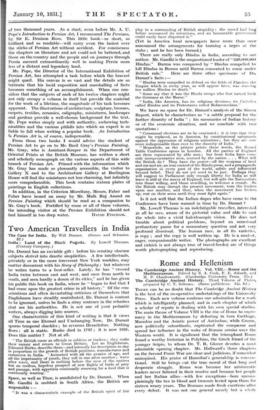 India : Land of the Black Pagoda. By Lowell Thomas. (Century Company.) Dn. Durant has an enviable gift : before his scrutiny obscure subjects shrivel into drastic simplicities. A few intellectuals, privately or in the more irreverent New York weeklies, may mutter discontent with his Story of Philosophy ; but whatever he writes turns to a best-seller. Lately, he has " crossed India twice between east and west, and once from north to south, and seen hardly a dozen of its cities," and he has given his public this book on India, where he " began to feel that I had come upon the greatest crime in all history." Of the con- scientious and often devastating criticism of themselves that Englishmen have steadily contributed, Dr. Durant is content to be ignorant, unless he fords a stray sentence in the rehashes that are his authorities. He is not one of your pedantic

One characteristic of this kind of writing is that it views all Time as one Eternal and Unchanging Now. Dr. Durant spurns temporal shackles ; he reverses Heracleitus. Nothing flows : all is static. Burke died in 1797 ; it is now 1931. Does this matter ? Not at all.

" The British come as officials or soldiers or traders ; they make their money and return to Great Britain. Let an Englishman, Edmund Burke, describe them—and intensify his description to-day in proportion to the growth of British positions, manufactures and commerce in India. ' Animated with all the avarice of age, and all the impetuosity of youth, they roll in one after another ; wave after wave, and there is nothing before the eyes of the natives but an endless, hopeless prospect of new flights of birds of prey and passage, with appetites continually renewing for a food that is continually wasting.' "

Space, as well as Time, is annihilated by Dr. Durant. When Mr. Gandhi is mobbed in South Africa, the British are responsible :—

" It was a characteristic example of the British spirit of fair

play in a surrounding of British stupidity : the crowd had long before announced its intentions, and an honourable government could easily have dispersed it."

(Yet in America local newspapers have more than once announced the arrangements for burning a negro at the stake ; and he has been burned.)

There are really only Hindus in India, according to our author. Mr. Gandhi is the unquestioned leader of 320,000,000 Hindus." Burma was conquered by " Hindus compelled to kill Hindus in Burma until Burma consented to come under British rule." Here are three other specimens of Dr. Durant's facts :—

" Hindus were compelled to defend on the fields of Flanders the Empire which in every year, as will appear later, was starving ten million Hindus to death."

" Some say that it was the Hindu troops who first turned back the Germans at the Marne."

" India, like America, has its religious divisions, its Catholics called Hindus and its Protestants called Mohammedans."

We have no space for Dr. Durant's analysis of the Simon Report, which he characterises as " a subtle proposal for the

further disunity of India " ; his summaries of Indian history or of the economic situation, and we conclude with two quotations :

" Communal elections are to be continued ; it is true that they might be replaced, as in America, by constitutional safeguards against the oppression of religious minorities ; but they are now more indispensable than ever to the disunity of India."

" Meanwhile, as the printer prints these words, the Round Table Conference opens in London. All the parties of England are there represented by able men ; but from India have come only unrepresentative men, scorned by the nation . . . What will the British do ? They have the power—all the weapons of land and sea and air, an iron control of the Hindti press, and a propaganda organisation in every part of the world, subtle and influential beyond belief. They do not yet need to be just. Perhaps they will suggest to Parliament only enough liberty for India as will leave it still at the mercy of England, but will split the Nationalists into those willing, and those unwilling, to welcome a crumb. So the British may disrupt the present movement, turn the leaders upon one another, and then, when the movement has broken up, rest on their arms until they must fight again."

Conference have been warned in time by Dr. DUrant ?

Mr. Lowell Thomas is an indefatigable traveller, interested in all he sees, aware of its pictorial value and able to cast the whole into a vivid kaleidoscopic vision. He does not trouble about political problems, beyond an occasional perfunctory pause for a momentary question and not very profound dismissal. The human race, in all its varieties, is copy ; and the copy is well written up. He is a modest, eager, companionable writer. The photographs are excellent and (which is not always true of travel-books) are of timings worth photographing and reproducing.