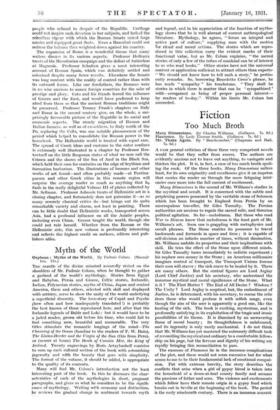 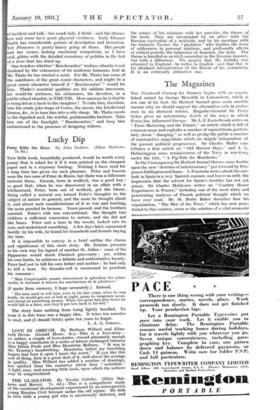 Too Much Broth A FAIR general criticism of these three very competent novels would be that they suffer from excess. The authors are evidently anxious not to leave out anything, to variegate and- thicken the plot. It is, in fact, a case of too much broth spoil- ing the cook. Of the three books, Many Dimensions suffers least, for its own originality and excellences give it an impetus that carries the reader on through the more fatiguing intri- cacies once more into the full current of excitement.

Many Dimensions is the second of Mr. Williams's studies in the mystical and occult. It is concerned with the subtle and perpleXing powers possessed by the veritable stone of Solomon which has been brought to England from Persia by an unscrupulous traveller, Sir Giles Tumulty: The Persian authorities are anxious to regain the sacred relic, and threaten political agitation. So far—melodrama. But those who -read War in Heaven know that melodrama is the least part of Mr. Williams's art. Soon one is grappling with metaphysics and occult phrases. The Stone enables its possessor to travel backwards and forwards in space and time ; it is capable of self-division an infinite number of times, without diminution. Mr. Williams unfolds its properties and their implications with skill. He tries the effect of the Stone upon different minds.

imagines control of transport, the Transport- Unions foresee their men will starve ; the sick crave to be healed by it. There are many others. But the central figures are Lord Arglay (Lord Chief Justice) and his secretary, who understand the immense mystical and moral significance of the Stone. What is it ? The First Matter ? The End of All Desire ? Wisdom ? The Unity Lord Arglay is sceptical, but, the embodiment of Justice, he is determined, with his secretary, to rescue the relic from those who would profane it with selfish usage, even though the aim of the user is apparently a good one, like the healing of the sick. The book is exciting, mysterious, and is profoundly satisfying in its exploitation of the tragic and ironic possibilities of its theme. It is illumined by an unwavering flame of moral beauty ; its thoughtfulness is unlaboured, and its ingenuity is only rarely mechanical. I do not think that Mr. Williams has yet-mastered the extremely difficult task of reconciling the mystical and ordinary to a comfortable fellow= ship on his page, but the fervour and dignity of his writing are rapidly bringing this reconciliation to pass.

The excesses of Flamenco lie in the immense complications of the plot, and these would not seem excessive but for what seems to me to be their fundamental lack of emotional compul- sion. Put with extreme brevity, the story describes the conflicts that arise when a girl of gypsy blood is taken into the household of a down-at-heel county family and arouses the passions of father and sons. The violence and excitements which follow have their -remote origin in a gypsy feud which breaks out in Seville at the beginning of the book. The period is the early nineteenth century. There is an immense amount

f incident and talk—too much talk, I think—and the chamc- ers and scene have great physical vividness. Lady Eleanor mith has considerable powers of description and invention. et Flamenco is pretty heavy going at times. Her people nd her scenes, lacking emotional compulsion, as I have said, glitter with the detailed monotony of pebbles in the bed of a river that has dried up.

One wonders whether "Beachcomber" realizes, when he is not deafened by the vehemence of his malicious humours, that in Mr. Thake he has created a saint. For Mr. Thake has some of the saintliness of the great comic characters, and might be a great comic character himself if " Beachcomber' " would let him. Thake's essential qualities are his sublime innocence, his would-be archness, his obtuseness, his devotion, as a public school ritualist, to THE TIE. How unaware he is that he is being led as a lamb to the slaughter ! To take him, therefore, into the crude joke-traps of Cowes, the moors, the Intellectual Drama, &c., is to turn him into a silly sheep. Mr. Thake excels in the dignified naïf, the wistful, gentlemanlike hesitant. Take him out of the limelight, " Beachcomber," and keep him embarrassed in the presence of designing widows.